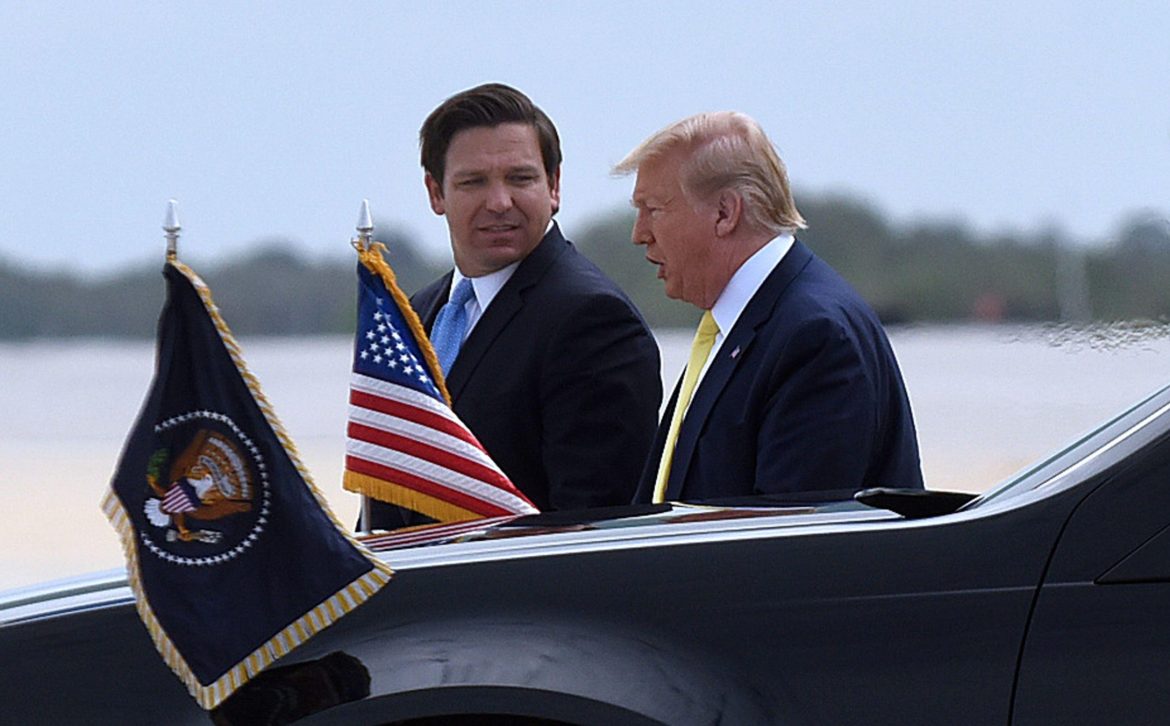 There might be a showdown between the GOP’s top presidential candidates in 2024 after all, as a public rift between former President Donald Trump and Florida Governor Ron DeSantis appears to have grown after competing rallies this weekend.

Not only did Trump and DeSantis hold separate rallies in Florida on Sunday, but they also stayed close enough to possibly compete over some rally attendees who live in the south-central part of the state.

Trump appeared alongside Sunshine State incumbent Senator Marco Rubio in Miami in the southeast part of the peninsula. Meanwhile, DeSantis stopped in Fort Myers and two other locations on the western coast roughly 150 miles away.

Happy to be back in Fort Myers tonight. The people of Southwest Florida are resilient…and full of energy!

Thanks for coming out tonight for our Don’t Tread on Florida Tour, Lee County! pic.twitter.com/o1g7l1AxN3

Sunday’s campaign stops followed on the heels of a rally where Trump dubbed DeSantis with the nickname, “Ron DeSanctimonious,” while speaking to a crowd in Pennsylvania.

The jab was inspired by a hypothetical 2024 Republican presidential primary that pitted Trump against DeSantis. According to the poll numbers on a slide presented by Trump, he would supposedly win 71% of the popular vote to the governor’s 10%.

DeSantis ignored the insult during Sunday’s events and Trump played nice while in the governor’s home state, apparently trying to squelch rumors of a rift.

The fact that Trump hadn’t endorsed DeSantis for his gubernatorial re-election bid had been viewed by many that the two were preparing to face off against one another.

Trump and DeSantis have also clashed recently over DeSantis’s endorsement of Joe O’Dea, a businessman running as a Republican for a Colorado Senate seat. O’Dea has promised to “actively campaign” against Trump.

The former president viewed DeSantis’ endorsement as a slight against him. He wrote about the occasion on his Truth Social platform, “A BIG MISTAKE.”

Trump appears poised to announce a third presidential run according to multiple reports after months of teasing. It’s speculated he may make his announcement as early as Nov. 14.

Meanwhile, DeSantis has dodged any public statements about his presidential intentions as he seeks re-election as governor. His Democratic rival, Charlie Crist, attempted to press him to answer this question in their only debate less than two weeks ago, to which DeSantis responded, “The only worn-out old donkey I’m looking to put out to pasture is Charlie Crist.”

The growing rift between the Republican leaders started near the end of Trump’s presidency when the governor bucked Trump’s COVID-19 response by keeping Florida beaches open. DeSantis’s pandemic policies along with his unapologetic stand for the Parental Rights in Education bill have catapulted him into the position of a national frontrunner for the Republican Party.

Despite Democrats attacking DeSantis for his similarities to Trump, such as President Joe Biden referring to him as “Donald Trump Incarnate” this week, the tension between Trump and DeSantis has been heralded as a battle for the future of the Republican Party.

A recent ABC/Ipsos poll found that more Republican voters feel that DeSantis should have a great deal of influence over the party politics than Trump, 72% to 64%. While the majority of polls have shown that Trump would win in a hypothetical 2024 presidential primary, others have shown that DeSantis has a slight edge over Trump.