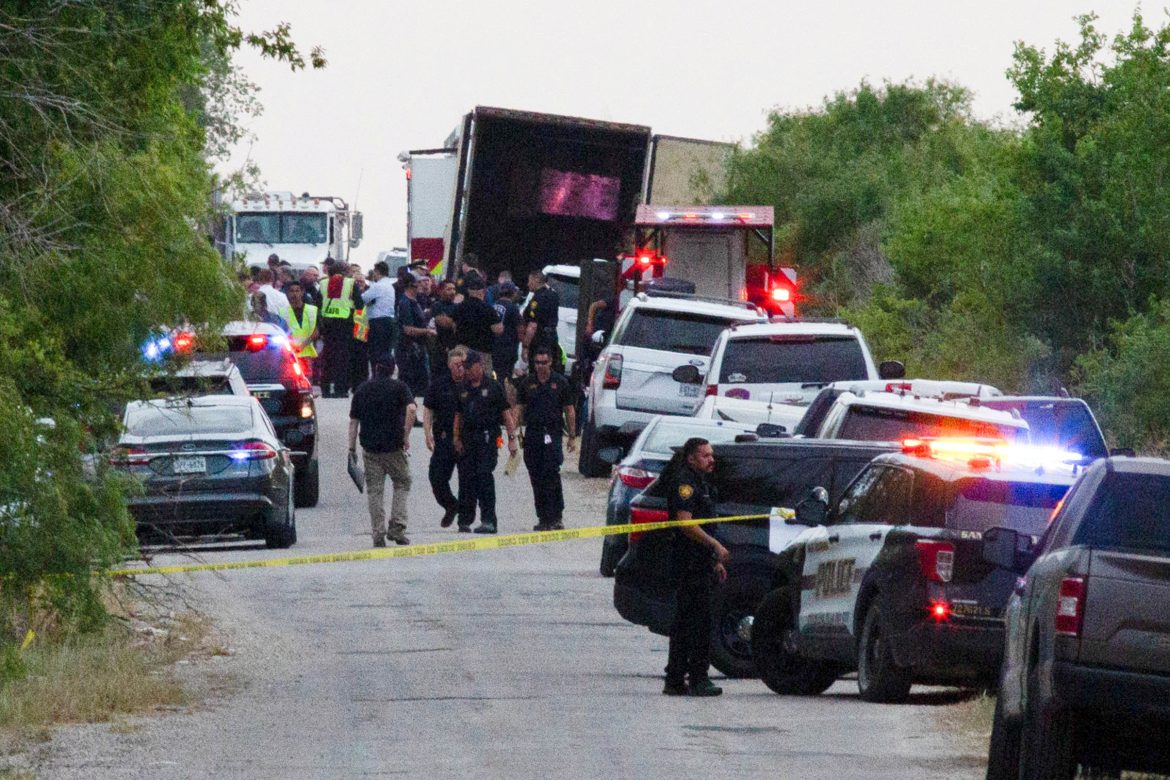 Officials in Texas are investigating the death of several dozen migrants whose bodies were located in the back of an 18-wheeler Monday evening.

As first reported by KSAT and WOAI in San Antonio and the Daily Wire nationally, fire and police in San Antonio discovered a tractor trailer containing 62 migrants, 46 of whom had died. The other 16 passengers, 12 adults, and four children were transported to an area hospital for treatment.

“We’re not supposed to open a truck and see a stack of bodies in there,” San Antonio Fire Department Chief Charles Hood told WOAI.

Three people were arrested, although San Antonio Police Chief William McManus said investigators were unsure to what extent each of these individuals was connected to the incident. The case has now been taken over by Homeland Security Investigations.

“On June 27, #HSI responded to a call from @SATXPolice regarding an alleged human smuggling event involving a tractor trailer on Quintana Road near Cassin Road,” HSI tweeted Monday night. “Upon arrival, we confirmed more than 40 deceased individuals.”

.@HSI_SanAntonio has initiated an investigation with the support of @SATXPolice. Details will be released as they are available. The criminal investigation remains ongoing.

It appears all 46 of the deceased were adults who likely died from heat stroke or heat exhaustion. The survivors suffered from the same ailments. KSAT reports that temperatures in the area rose to highs of 101 degrees, and officials stated there was no air-conditioning in the trailer.

“It’s tragic,” WOAI quoted San Antonio Mayor Ron Nirenberg as saying. “They had families… and were likely trying to find a better life. It’s nothing short of a horrific, human tragedy.”

Late Monday night, Nirenberg tweeted, “Migrants seeking asylum should always be treated as a humanitarian crisis, but this evening we’re facing a horrific human tragedy. More than 40 hopeful lives were lost. I urge you to think compassionately, pray for the deceased, the ailing, and their families at this moment.”

In a Monday night press briefing alongside fire and police officials, Nirenberg added that he hoped the people behind this human trafficking and smuggling operation faced steep legal consequences.

On his campaign’s Twitter profile, Texas Gov. Greg Abbott – who, along with numerous other state and federal agencies, has been working for months to address a surging uptick in migrant border crossings – said this was a tragedy that could have been avoided.

“These deaths are on Biden,” Abbott tweeted. “They are a result of his deadly open border policies. They show the deadly consequences of his refusal to enforce the law.”

During the Monday night briefing, which was streamed on the police department’s Facebook page, McManus said officers received a call shortly before 6 p.m. local time when a worker, who was not identified, heard cries for help from inside the truck.