Alien ‘super-Jupiter’ breaks the mold on where planets can exist 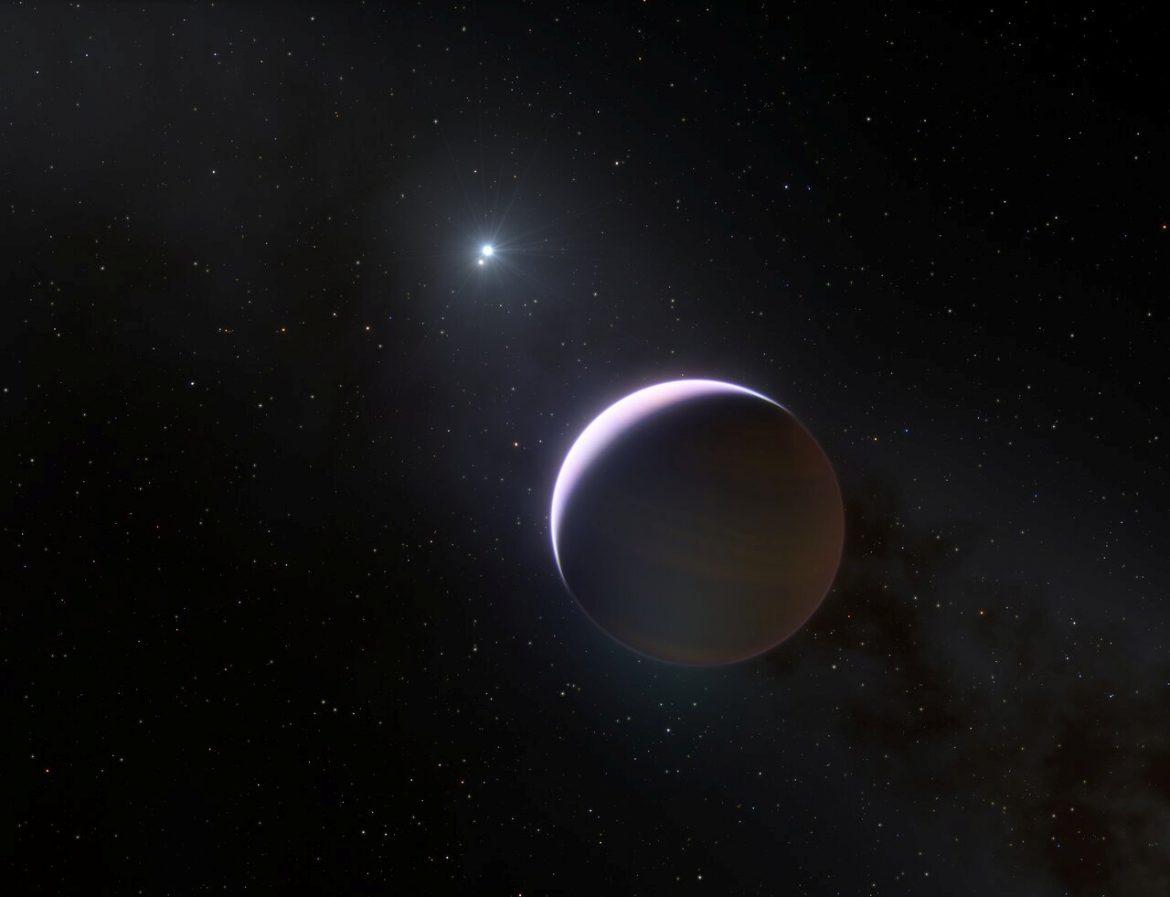 One of the largest planets ever detected orbits at an enormous distance around two stars with a combined mass up to 10 times greater than our sun, an extreme celestial family that shatters assumptions about the type of places where planets can exist.

The planet, located about 325 light years from Earth, is a gas giant apparently similar in composition to Jupiter but about 11 times more massive, researchers said on Wednesday. It belongs to a planetary class called “super–Jupiters” exceeding the mass of our solar system’s largest planet.

It orbits a pair of stars gravitationally bound to one another, called a binary system. It has what might be the widest orbit of any known planet – about 100 times wider than Jupiter‘s orbit around our sun and about 560 times wider than Earth’s.

Until now, no planet had been found orbiting a star more than three times the sun’s mass. Stars larger than that emit so much radiation that they were thought to torch the planetary formation process. This discovery dashes that view.

“Planet formation appears to be an incredibly diverse process. It has surpassed our imagination many times in the past, and will probably keep doing so in the future,” said astronomer Markus Janson of Stockholm University in Sweden, lead author of the research published in the journal Nature.

Since the discovery in the 1990s of the first planets beyond our solar system – so-called exoplanets – scientists have sought to learn whether or not our solar system represents standard “architecture.”

“From the trend seen so far, our solar system is not the most common type of planetary system architecture that exists,” said study co-author Gayathri Viswanath, a Stockholm University astronomy doctoral student.

“For instance, there are planetary systems with so-called ‘hot Jupiters’ where massive Jupiter-size planets orbit their host stars at a very close distance. A vast majority of the discovered planets also seem to have a size between that of Earth and Neptune, a size range in which our solar system has no planets,” Viswanath said.

The larger of the tandem stars in the b Centauri system in which the newly discovered planet resides has a mass around five to six times that of the sun and is more than three times hotter, unleashing large amounts of ultraviolet and X-ray radiation.

It is a so-called B-type star, a category of extremely luminous blue stars.

Less is known about the smaller of the tandem. It is estimated at anywhere from one-tenth to four times the sun’s mass. The two stars orbit relatively close to one another, within about the distance of the Earth from the sun. They can be seen with the naked eye from Earth in the constellation Centaurus.

The European Southern Observatory’s Chile-based Very Large Telescope captured an image of the planet, named b Centauri (AB)b. Like Jupiter, it is believed to be comprised mostly of hydrogen and helium.

Scientists had doubted that stars larger than three times the sun’s mass could host planets because they would present an unfriendly environment for planetary formation.

Planets form from material coming together inside huge disks of swirling gas and dust surrounding newborn stars. Big stars, it was thought, give off so much high-energy radiation that this material might be evaporated. The newly identified planet coalesced so far from its stars that it may have avoided this cauldron.

“The distance from the stars probably matters a lot, at least it did when the planet formed,” Janson said.

While scientists continue to be baffled by the formation and the magnitude of the heavens, the Bible clearly states that God is the creator of all things including the heavens and the earth and holds all planets in the palm of his hand. He is the one that is truly worthy of our awe.

Lift up your eyes on high, And see who has created these things, Who brings out their host by number; He calls them all by name, By the greatness of His might And the strength of His power; Not one is missing. – Isaiah 40:26