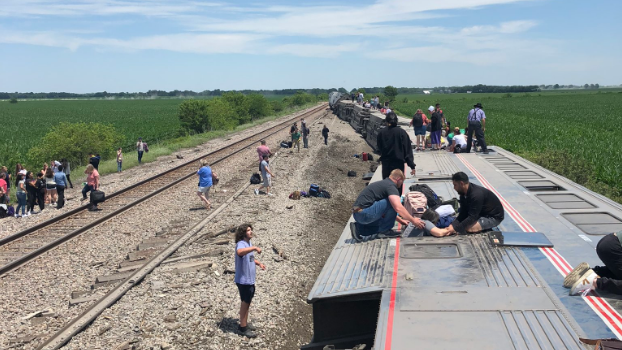 An Amtrak train derailed in northern Missouri on Monday after hitting a dump truck at a crossing, the U.S. national passenger railroad service said, with CNN reporting that at least 50 were injured with multiple fatalities.

The train, with approximately 243 passengers and a dozen crew members, hit the vehicle at a public crossing near Mendon, Missouri, at 1:42 p.m. as it was traveling eastbound from Los Angeles to Chicago, Amtrak said. Eight cars and two locomotives derailed, the news service said.

CNN cited the Chariton County Ambulance Service in its report on the fatalities and deaths. The service could not be immediately reached by Reuters for confirmation.

Mendon is in a rural area about 100 miles northeast of Kansas City, Missouri.

Three patients were being taken to a University of Missouri Health Care hospital in Columbia, Missouri, about 90 miles away, a hospital spokesperson said.

The federal National Transportation Safety Board said it was gathering information on the incident.

Aerial footage showed all but one of the eight passenger cars resting fully on their right sides, just off a parallel track surrounded by large plots of grass and farmland. Dozens of trucks and cars lined a nearby street and helicopters could be seen as rescuers assisted the recovery.

The train I was traveling on derailed on the way to Iowa near Mendon Missouri pic.twitter.com/YndSEEXkto

More than a dozen people were sitting and standing on the sides of train cars that went off the rails as others comforted one another near the tracks, video posted to social media showed.

Rescuers used ladders to reach people perched on the train’s side. A vehicle axle was among the debris strewn along the track.

“We ask Missourians to join us in praying for all those impacted,” Missouri Governor Mike Parson said on Twitter.

A passenger on the train, Robert Nightingale, told CNN he had been dozing off in his car when the train derailed.

Nightingale said he and others were at a local school.

“There were ambulances all over. They were bringing stretchers to the train, and now there are stretchers here at the school,” he said.