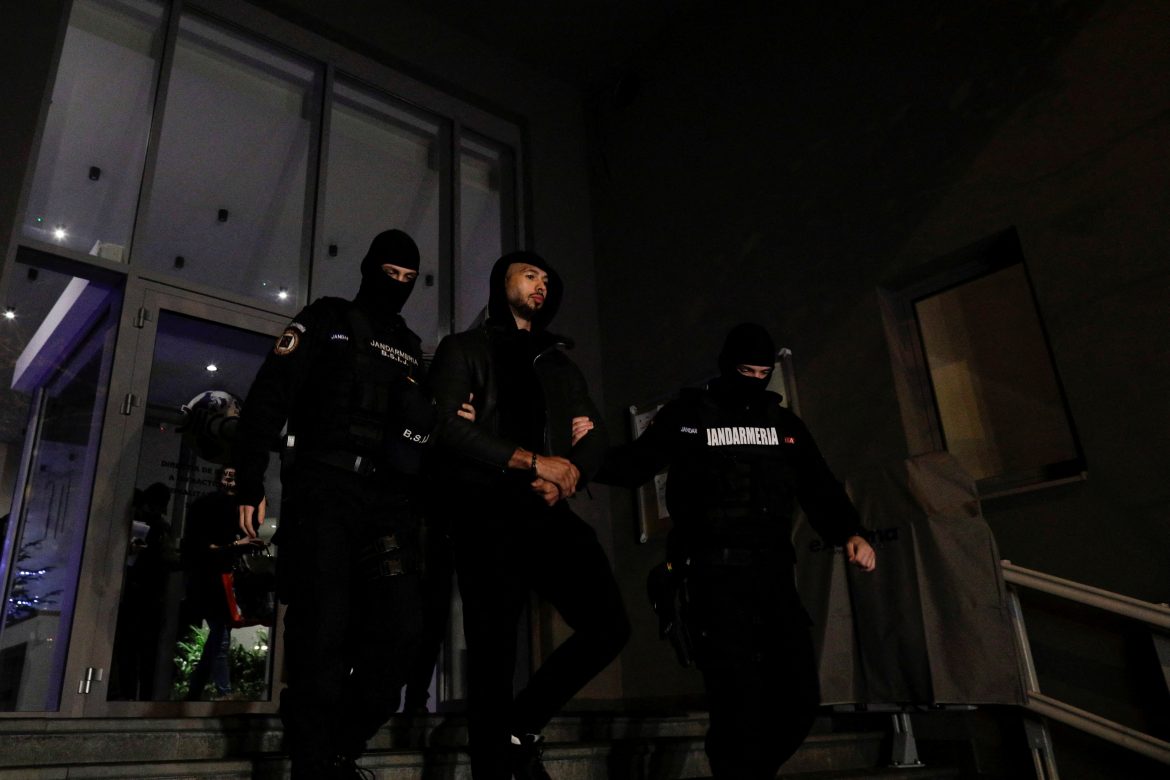 “The four suspects … appear to have created an organized crime group with the purpose of recruiting, housing, and exploiting women by forcing them to create pornographic content meant to be seen on specialized websites for a cost,” prosecutors in the case said. “They would have gained important sums of money.”

Tate, who was born in America and raised in Great Britain, has reportedly lived in Romania for the past five years.

According to a statement from Romania’s Directorate for Investigating Organized Crime and Terrorism (DIICOT), six women were allegedly found and reported to have been “sexually exploited by the organized criminal group.”

The statement detailed the alleged crimes of the suspects.

“Victims were … transported and housed in buildings in Ilfov county where, by exercising acts of physical violence and mental coercion (through intimidation, constant surveillance, control and invoking alleged debts), they were sexually exploited by group members … forcing them to perform pornographic demonstrations … in order to obtain significant financial benefits consisting of the sums of money obtained as a result of accessing the materials by users.”

While the statement didn’t specifically name Tate or his brother, their attorneys confirmed that they had been detained by authorities. The suspects will be held for at least 24 hours, with prosecutors requesting a 30-day detention from a judge.

Speaking on behalf of Tate to the Daily Mirror, a spokesperson said that they “cannot provide any details at the moment regarding alleged reports that [the Tate brothers] have been detained. However, Andrew and Tristan Tate have the utmost respect for the Romanian authorities and will always assist and help in any way they can.”

Earlier this year, Tate predicted in an interview that he would be arrested soon, but claimed that he is innocent and “the most scrutinized man on the planet.”

BRAGGING TO GRETA TIPS OFF COPS

Recently, Tate became entrenched in a war of words on Twitter with climate activist Greta Thunberg when he tweeted to Thunberg about his numerous vehicles and their “respective enormous emissions.”

“I have 33 cars,” Tate posted, before going on to list some of his cars. “My Bugatti has a w16 8.0L quad turbo. My TWO Ferrari 812 competizione have 6.5L v12s. This is just the start. Please provide your email address so I can send a complete list of my car collection and their respective enormous emissions.”

Thunberg’s response to Tate’s message, in which she told him to “get a life” and made a joke about his male anatomy, prompted Tate to reply with a video reaction.

In Tate’s video reaction, pizza boxes from a Romanian pizza restaurant can be seen. The pizza boxes allegedly helped Romanian police confirm Tate’s presence in the country prior to their arrival at Tate’s residence.