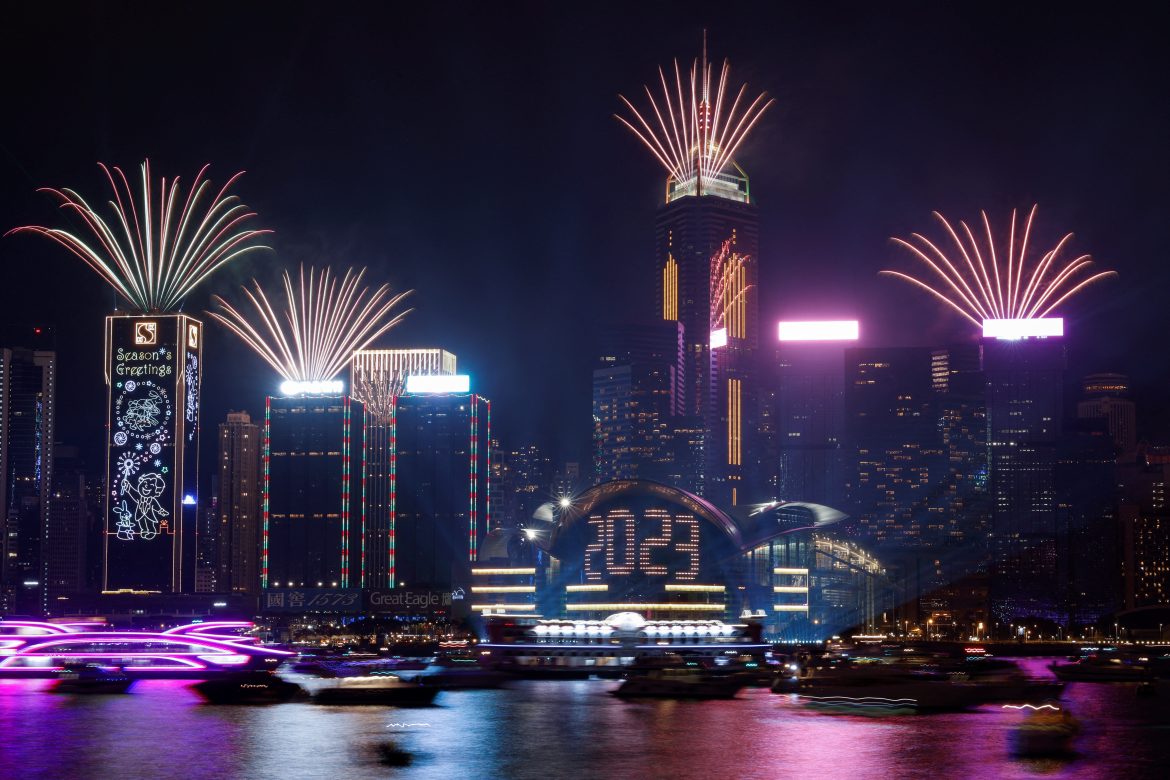 Australia celebrated its first restriction-free New Year’s Eve after two years of COVID disruptions, as the world began bidding farewell to a year marked for many by the war in Ukraine and economic stresses.

Revellers celebrated across Asia from China to the Philippines to Thailand.

Sydney, one of the world’s first major cities to welcome in the New Year, did so with a typically dazzling fireworks display, which for the first time featured a rainbow waterfall off the famous Harbour Bridge.

“This New Year’s Eve we are saying Sydney is back as we kick off festivities around the world and bring in the New Year with a bang,” said Clover Moore, lord mayor of the city, ahead of the events.

Lockdowns at the end of 2020 and a surge in Omicron cases at the end of 2021 led to crowd restrictions and reduced festivities in Australia. However, curbs on celebrations were lifted this year after Australia, like many countries around the world, re-opened its borders and removed social distancing restrictions.

The display in Sydney featured thousands of fireworks launched from the four sails of the Sydney Opera House and from the Harbour Bridge.

In China, rigorous COVID restrictions were lifted only this month in the government’s reversal of its “zero-COVID” policy, a switch that has led to soaring infections and meant some people were in no mood to celebrate.

“This virus should just go and die, cannot believe this year I cannot even find a healthy friend that can go out with me and celebrate the passage into the New Year”, wrote one social media user based in eastern Shandong province.

Others expressed hope the New Year would herald China’s return to pre-pandemic life.

“I lived and worked under COVID throughout 2022 … I hope 2023 is when everything can go back to what it was before 2020,” said one user based in the neighbouring province of Jiangsu.

In the city of Wuhan, where the pandemic began three years ago, tens of thousands of people gathered to celebrate amid a heavy security presence.

Barricades were erected and hundreds of police officers and other security workers stood guard on the night of the first large-scale spontaneous gathering in the city since nationwide protests in late November – soon after which Chinese authorities all but abandoned the zero-COVID policy.

Officers shuttled people away from at least one popular New Year’s Eve gathering point and used loudspeakers at various locations to blast out a short message on a loop advising people not to gather.

“In the interest of your health and safety do not gather or stop,” the message advised large crowds of revellers, who took no notice.

In Shanghai, many thronged the historic riverside walkway, the Bund.

“We’ve all travelled in from Chengdu to celebrate in Shanghai,” said Da Dai, a 28-year-old digital media executive who was travelling with two friends. “We’ve already had COVID, so now feel it’s safe to enjoy ourselves.”

Days after Hong Kong lifted limits on group gatherings, tens of thousands of people gathered near the city’s Victoria Harbour for a countdown. Lights beamed from some of the city’s biggest harbour-front buildings.

It was the city’s biggest New Year’s Eve celebration in several years. The event was cancelled in 2019 due to often violent social unrest, and was scaled down in 2020 and 2021 due to the pandemic.

Malaysia’s government cancelled its New Year countdown and fireworks event at Dataran Merdeka in Kuala Lumpur after flooding across the nation displaced tens of thousands of people and a landslide killed 31 people this month.

Celebrations at the country’s famous Petronas Twin Towers were pared down with no performances or fireworks.

Europe was bidding farewell to a year that saw a major war erupt after Russia’s invasion of Ukraine in February, with no end in sight to the conflict.

Curfews ranging from 7 p.m. to midnight remained in place across Ukraine, making the celebration of the beginning of 2023 impossible in public spaces. Several regional governors posted messages on social media warning residents not to break restrictions on New Year’s Eve, with some even warning that the police presence on city streets would be increased at night.

“I would really like this year to be over”, said Kyiv resident Oksana Mozorenko, 35, though she said her family had put up a Christmas tree and bought presents to make it “a real holiday”.

Russia carried out its second major round of missile attacks on Ukraine in three days on Saturday, Ukrainian officials said, with explosions reported throughout the country.

“The terrorist country launched several waves of missiles. They are wishing us a happy New Year. But we will persevere,” the governor of Kyiv region, Oleksiy Kuleba, wrote on Telegram.

Paris was set to stage its first New Year fireworks since 2019. A 10-minute firework show was set to kick off at midnight, with 500,000 people expected to gather on Champs-Elysees avenue to watch.

Like many places, the Czech capital Prague was feeling the pinch economically and so was not holding a fireworks display.

“The main reasons include the situation in Ukraine and the unfavourable economic situation of many Prague households and the related need to seek financial savings on the part of the capital,” city hall spokesman Vit Hofman said. “Holding celebrations did not seem appropriate.”

In an echo of sometimes violent weather extremes around the world in 2022, heavy rain and high winds on Saturday meant firework shows in the Netherlands’ main cities including Amsterdam and The Hague – and the nationally televised display in the port city of Rotterdam – were cancelled.

In Croatia, dozens of cities, including the capital Zagreb, cancelled the fireworks after pet lovers warned about the damaging effects of noise and gases on animals and people, calling for more environmentally aware celebrations.

The Adriatic town of Rovinj planned to replace fireworks with laser shows and Zagreb was putting on confetti, visual effects and music. The port town of Rijeka aimed to re-direct funds allocated for fireworks to animal care associations, authorities said.