Astros give Houston the edge in two-sport showdown 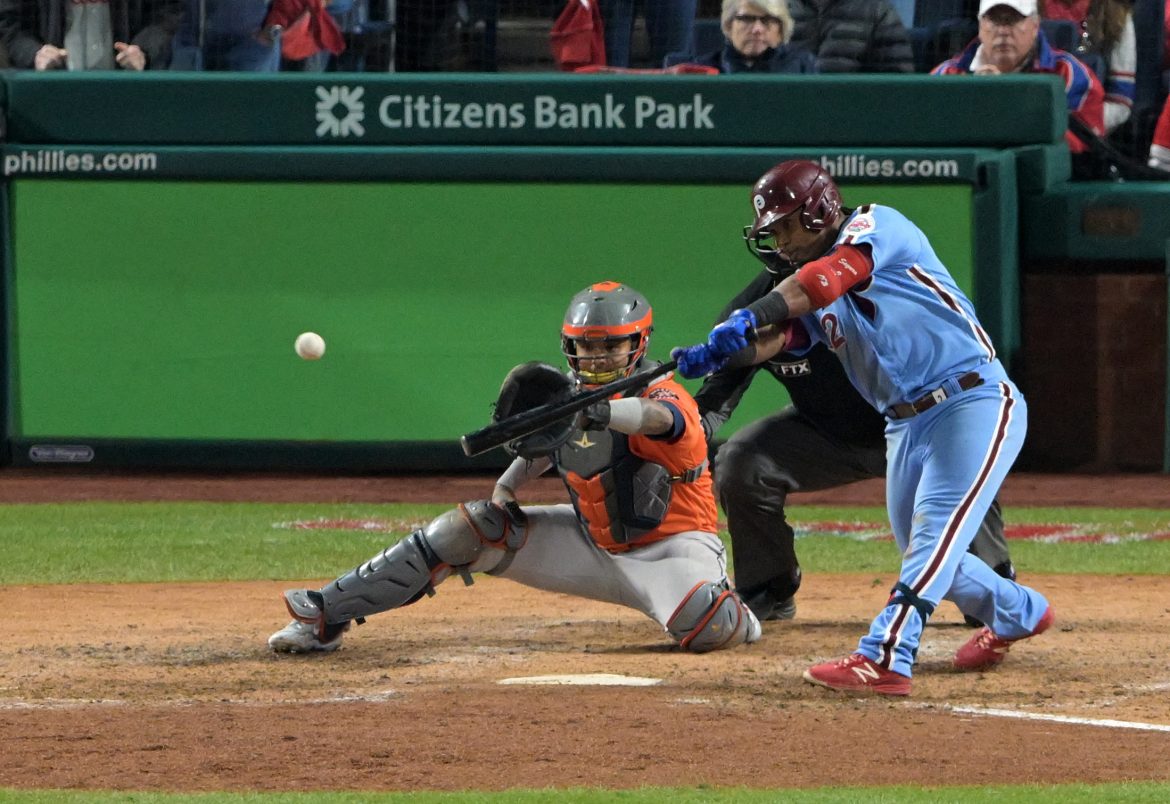 The Houston-Philadelphia two-sport showdown Thursday night ended in a split.

The more important victory, however, went to Houston as the Astros beat the Phillies 3-2 to take a 3-2 lead in the World Series. The Astros can secure their second championship in six seasons with a victory in Game 6 Saturday night as the series heads back to Texas.

In the NFL part of the doubleheader, the Eagles beat the Texans 29-17 to improve to 8-0 for the first time in franchise history. The Texans are now 1-6-1 and heading nowhere.

Verlander, the expected American League Cy Young Award winner, had been 0-6 in the World Series. He pitched out of trouble, leaving five runners on base in the second and third innings.

“Nobody can get out of trouble better than him,” Astros manager Dusty Baker said.

Verlander’s struggles in the World Series date back to his rookie season with Detroit in 2006. They continued in Game 1 of this series when he blew a 5-0 lead as Philadelphia rallied to win extra innings. The win last night finally took the rare blemish off of his otherwise stellar career.

Following the win, Verlander’s teammates gave the 39-year-old future Hall-of-Famer the “rookie treatment” to celebrate him finally breaking through on the biggest stage.

“I just want to win, not myself personally. I just want the team to win,” Verlander said.

Rookie Jeremy Peña hit a go-ahead home run off Phillies starter Noah Syndergaard in the fourth inning and the Astros made two excellent defensive plays in the last two innings to preserve a one-run lead.

Chas McCormick with the PLAY OF THE #POSTSEASON! #WorldSeries pic.twitter.com/2S0C1it5Dt

Now the series shifts back to Houston where the teams split the first two games.

“Just keep fighting, just be yourself, keep playing hard because that’s what they do,” Phillies manager Rob Thomson said he told his players. “I mean, they played as hard as anybody out there. We just couldn’t get a big hit.”

While the Astros overcame a raucous Philly crowd to take a series advantage, the Eagles continued their impressive run with another win in Houston.

Jalen Hurts threw for 243 yards and two touchdowns, and the Eagles fought through a sluggish first half to finish strong.

Hurts has led the team where it’s never been with eight straight victories to start the season.

“I know it’s special for the city of Philadelphia,” he said. “But I’ve been 8-0 before and lost the National Championship. So we just have to take it day by day. We haven’t accomplished anything yet. It’s a day-by-day thing of us controlling the things we can and playing to our standard and trying to grow every day.”

Hurts was referring to his freshman year at Alabama when his team had a 14-0 start but came short of the ultimate goal.

“It’s just the next one. At this particular point, being 8-0 is sweet, right? It beats the alternative of being 7-1 or 6-2,” Eagles coach Nick Sirianni said. “We know our goal wasn’t to go 8-0. Our goal is to take one game at a time. That’s our goal. Is it good to be able to have this long weekend and sit at 8-0? Of course. We know we’re going to get back to work on Monday and go attack this next game against Washington like we attacked this last game against Houston.”

The Eagles are the 29th team in to start 8-0 in the Super Bowl era and the other 28 all made the playoffs. Fifteen of those teams won their conference and eight won the Super Bowl.

“It’s not easy to win in this league,” running back Miles Sanders said. “We’re happy to have eight out of the way but we’re on to bigger and better things. Still trying to take it one game at a time. It’s still a long rest of the season and a division game coming up and we got a lot of stuff to focus on more than being 8-0.”