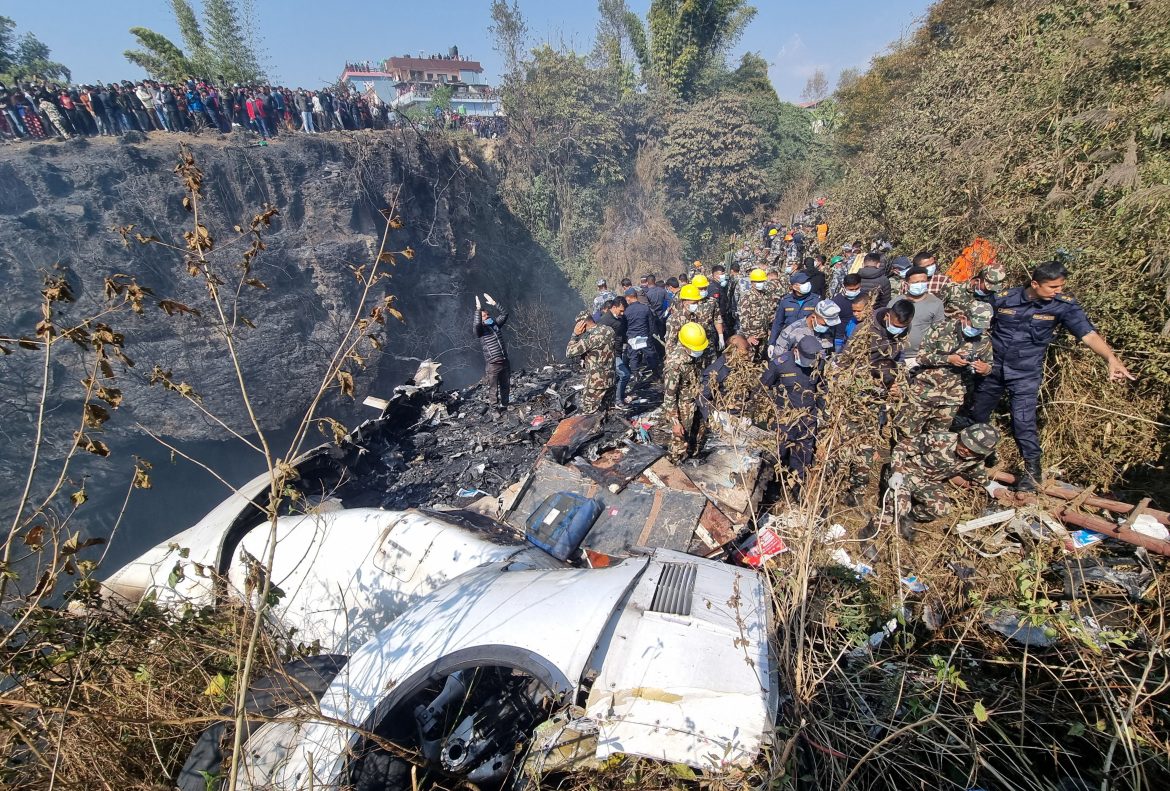 At least 68 people were killed on Sunday when a domestic flight of Yeti Airlines crashed in Pokhara in Nepal, the worst air crash in three decades in the small Himalayan nation.

Hundreds of rescue workers scoured the hillside where the flight carrying 72 people from the capital Kathmandu went down. Officials late in the evening called off the search operations for the day, saying they will resume on Monday.

Local TV footage earlier showed rescue workers scrambling around broken sections of the aircraft. Some of the ground near the crash site was scorched, with licks of flames visible.

The weather had been clear and there was no immediate indication of what caused the crash.

It was Nepal‘s deadliest air crash since 1992, the Aviation Safety Network database showed, when a Pakistan International Airlines Airbus A300 crashed into a hillside upon approach to Kathmandu, killing all 167 people on board.

Nearly 350 people have died since 2000 in plane or helicopter crashes in Nepal – home to eight of the world’s 14 highest mountains, including Everest – where sudden weather changes can make for hazardous conditions.

The European Union has banned Nepali airlines from its airspace since 2013, citing safety concerns.

The plane on Sunday made contact with Pokhara airport from Seti Gorge at 10:50 a.m., the Civil Aviation Authority said in a statement. “Then it crashed.” At least 68 people were confirmed dead, it said. 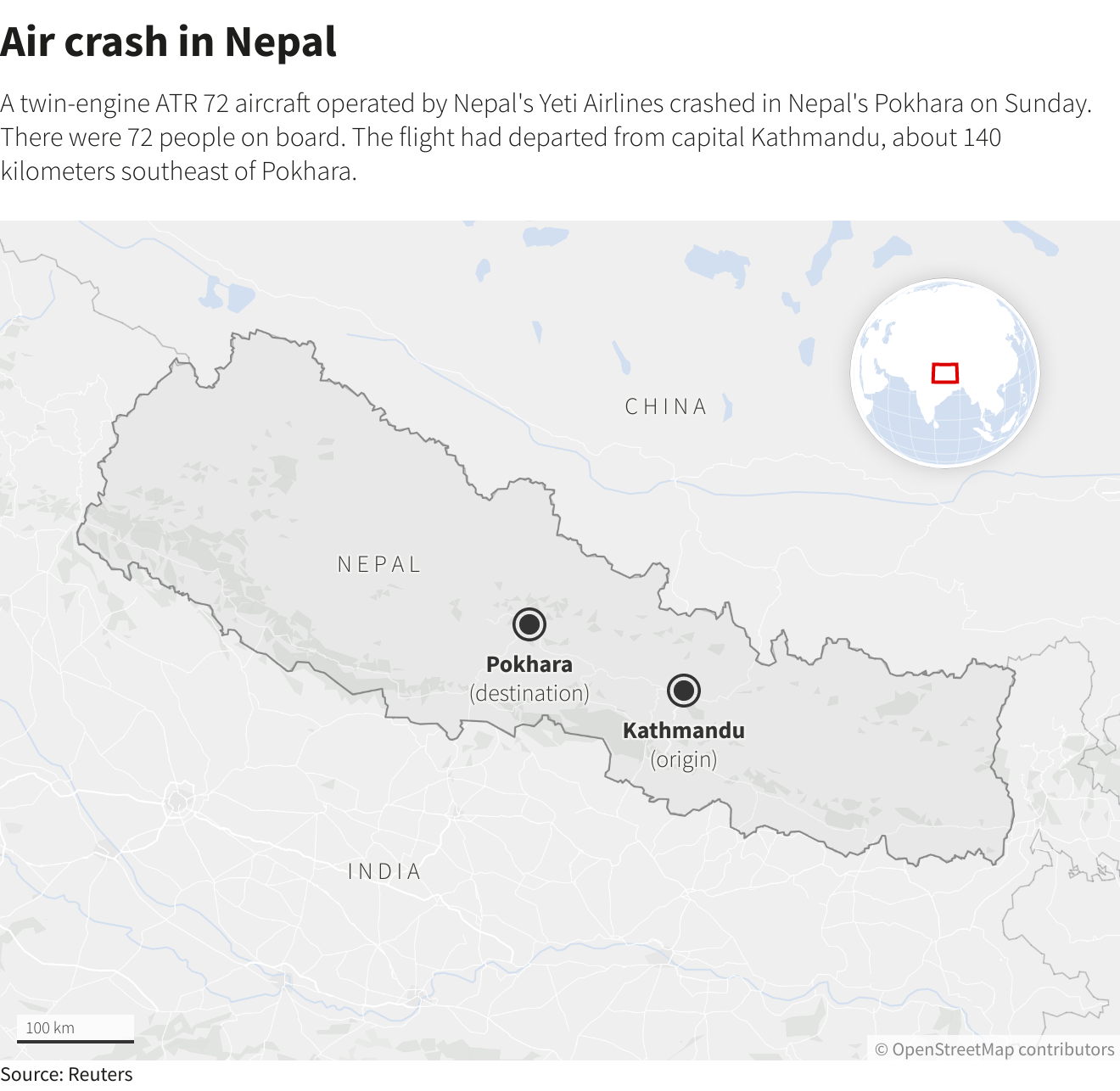 “Half of the plane is on the hillside,” said Arun Tamu, a local resident, who told Reuters he reached the site minutes after the plane went down. “The other half has fallen into the gorge of the Seti river.”

Khum Bahadur Chhetri, another local resident, said he watched from the roof of his house as the flight approached.

“I saw the plane trembling, moving left and right, and then suddenly it nosedived and it went into the gorge,” Chhetri said.

The government has established a panel to investigate the cause of the crash and it is expected to report within 45 days, finance minister Bishnu Paudel told reporters.

France’s air accident investigation agency BEA said it would participate in the probe into the causes of the crash and coordinate with all other parties involved.

Those on board the twin-engine ATR 72 aircraft included three infants and three children, the Civil Aviation Authority’s statement said.

The journey to Pokhara, Nepal‘s second largest city tucked under the picturesque Annapurna mountain range, from the capital Kathmandu is one of the country’s most popular tourist routes, with many preferring a short flight instead of a six-hour-long drive through hilly roads.

A Pokhara Airport spokesman said the aircraft crashed as it approached the airport, adding that the “plane cruised at 12,500 feet and was on a normal descent.” The weather on Sunday was clear.

Flight tracking website FlightRadar24 said on Twitter the Yeti Airlines aircraft was 15 years old and equipped with an old transponder with unreliable data. It added that the last signal from the transponder was received at 0512 GMT at an altitude of 2,875 feet above mean sea level.

Pokhara Airport is located at about 2,700 feet above mean sea level, according to FlightRadar24.

On its website, Yeti describes itself as a leading domestic carrier. Its fleet consists of six ATR 72-500s, including the one that crashed. It also owns Tara Air, and the two together offer the “widest network” in Nepal, the company says.

Yeti said it had canceled all its regular flights for Monday in “mourning for the passengers who lost their lives.”

The ATR72 of European planemaker ATR is a widely used twin-engine turboprop plane manufactured by a joint venture of Airbus and Italy’s Leonardo. Yeti Airlines has a fleet of six ATR72-500 planes, according to its website.

“ATR specialists are fully engaged to support both the investigation and the customer,” ATR said in a statement.

Airbus and Leonardo did not immediately respond to requests for comment.