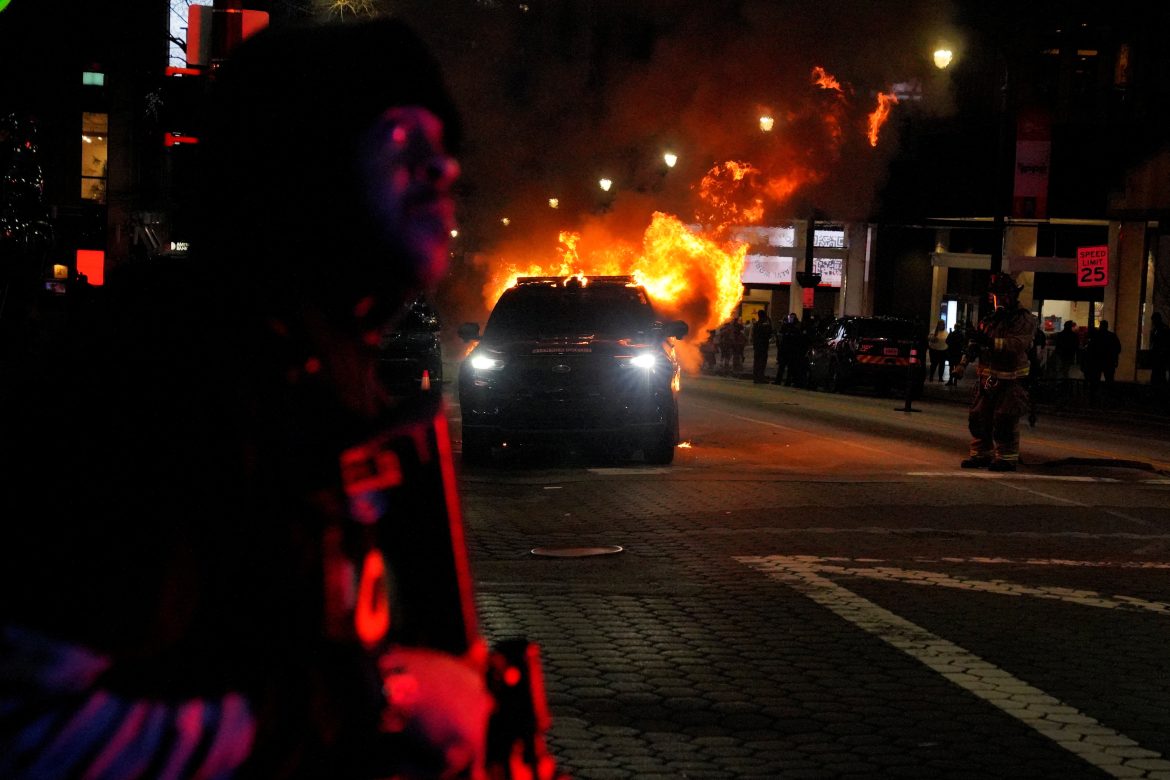 Antifa didn’t get the “night of rage” it wanted, but for a harrowing moment Saturday night, Downtown Atlanta was home to chaos.

What began as a peaceful protest – one that was organized after Georgia police shot and killed an activist who police say opened fire on law enforcement – devolved into broken windows, a burning cop car, and other acts of vandalism as black-clad protestors began shooting fireworks, throwing rocks, and starting fires.

“Violence and unlawful destruction of property are not acts of protest,” Georgia Gov. Brian Kemp tweeted. “They are crimes that will not be tolerated in Georgia and will be prosecuted fully.”

Such that criminals have a justification for their crimes, rioters were angered that Georgia officers killed Manuel Esteban Paez Teran, a 26-year-old who identified as a nonbinary person called “Tortuguita,” after Teran fired a handgun at officers and struck a Georgia State Trooper.

The shooting occurred as police sought to clear a group of protesters who had gathered at the site of a proposed multimillion-dollar police training facility. The protesters object to the fact that the $90 million project would require the removal of trees and have spent about a year camping on the property.

Even though the Georgia Bureau of Investigation (GBI) corroborated the police’s story and shared a photo of the gun found in Teran’s possession, anti-law enforcement entities have continued to question the official explanation.

(1/3) We are releasing a photo of the handgun that was in Manuel Esteban Paez Teran’s possession when a Georgia State Patrol trooper was shot on January 18 at the site of the future Atlanta Public Safety Training Center. pic.twitter.com/ER1mGfgBkL

A poster circulated before the protests read, “Police killed a protester. Stand up. Fight back.”

Atlanta Mayor Andre Dickens, a Democrat, said at a press conference that police quickly restored the peace. However, he added that some protesters had brought explosives to Downtown Atlanta.

He later tweeted, “Atlanta Police have arrested 6 people so far, some of whom were carrying explosives. These individuals meant violence and used the cover of peaceful protest to conceal their motives. Our law enforcement teams were prepared and resolved the situation swiftly.”

Atlanta Police have arrested 6 people so far, some of whom were carrying explosives. These individuals meant violence and used the cover of peaceful protest to conceal their motives. Our law enforcement teams were prepared and resolved the situation swiftly. pic.twitter.com/tUds0W4abJ

It is unclear how many people participated in the anti-cop violence, and there was no indication of the extent, if any, of injuries.

A Fox 5 Atlanta reporter became the target of immense criticism Saturday night as he stood before a burning cop car and uttered the phrase “largely peaceful” about the protest.

Journalist Andy Ngô, a man who has been attacked and harassed to such a degree by Antifa that he’s had to leave the country, shared the video.

“@FOX5Atlanta pulls a CNN ‘largely peaceful protest’ in their news segment about the violent attack on downtown Atlanta by #Antifa & far-left extremists,” Ngô tweeted. “The mayor just confirmed the arrestees were found with explosives.”

.@FOX5Atlanta pulls a CNN "largely peaceful protest" in their news segment about the violent attack on downtown Atlanta by #Antifa & far-left extremists. The mayor just confirmed the arrestees were found with explosives. pic.twitter.com/wulkxaHL95

Rating Saturday night as more peaceful or violent is subjective and comes down to the observer’s level of comfort with any violence.

It is instructive to look at a second video, also from Fox 5 and Heath, that shows what the protest looked like prior to the violence.

EARLIER TODAY: This was the scene at Underground Atlanta earlier today when the protest was mostly peaceful and just as #COPCITY protesters started their march into the streets, things took a turn when a portion of the group began to vandalize buildings and police vehicles. #ATL pic.twitter.com/tWqBQSIzX9

Numerically speaking, the rally was attended by primarily peaceful people. But, what is the threshold between protest and riot?

For some, any amount of violence is too much. For others, there is a sliding scale, often predicted by political leanings.

Georgia Republican Rep. Marjorie Taylor Greene, who posted often about what she referred to as “left-wing terrorism,” was critical of the media’s coverage and of Antifa more broadly.

Does this look like a “protest” to you?! No, because it’s not,” Green tweeted. “It’s left-wing politically motivated terrorism designed to intimidate and demoralize their political enemies. We must stand with our police and declare these groups what they are: TERRORISTS.”

No, because it’s not. It’s left-wing politically motivated terrorism designed to intimidate and demoralize their political enemies.

We must stand with our police and declare these groups what they are:

In an earlier tweet, Greene wrote, “The media has fueled this domestic terrorism. Labeling violent rioting as protests. It’s part of why Antifa/BLM terrorists have gotten away with so much. If you aren’t paying close attention, the media sells you a totally different story.

She later added, “The ANTIFA/BLM terrorist insurrection has been going on for years now.”

While certainly not as fiery as Greene, Georgia Democratic Congresswoman Nikema Williams also expressed her concern for Atlantans and thanked law enforcement.

“My highest priority is the safety and well-being of everyone in Atlanta and in the Fifth District,” Williams tweeted. “I’m grateful to all of the first responders who kept people safe downtown tonight.”