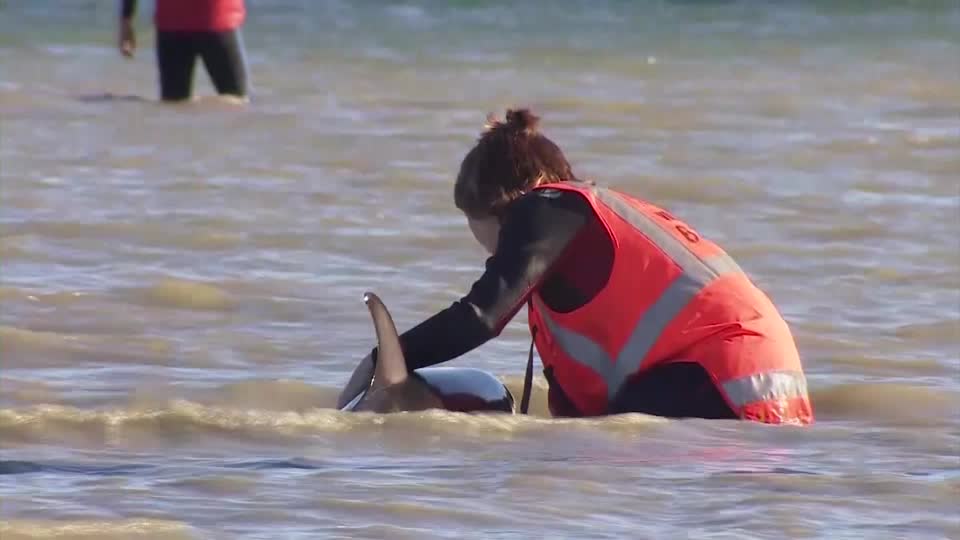 A baby dolphin is being nursed back to health after nearly drowning off the coast of Thailand.

In July, fishermen noticed a distressed young dolphin, sick and dying, and rushed to its aid. They contacted a group of marine conservationists, who dispatched a “rescue team [to] transport the baby to Thailand’s Marine and Coastal Resources Research and Development Center for veterinary attention,” according to a report from the Associated Press.

The dolphin is a young male of the Irrawaddy dolphin species. It was suffering from a lung infection and needed round-the-clock care. Veterinarians and volunteers at the center dedicated themselves to nursing the baby back to health. Initially, they fed the dolphin milk through a tube, and later a bottle, until it gained enough strength to swim on its own.

Those caring for the dolphin nicknamed him Paradon, meaning “brotherly burden,” because they knew his recovery would be an uphill battle.

“We said among ourselves that the chance of him surviving was quite low, judging from his condition,” Thanaphan Chomchuen, a veterinarian at the center, said Friday. “Normally, dolphins found stranded on the shore are usually in such a terrible condition. The chances that these dolphins would survive are normally very, very slim. But we gave him our best try on that day.”

After a month of intensive care, Paradon is doing much better. His lungs are no longer infected, but he remains weak and will not drink enough milk to maintain proper nutrition. Despite the team’s efforts to feed the dolphin every 20 minutes, he would rather play than eat.

The center expects to continue care for the dolphin for as long as one year, until he can be weaned from milk and grows teeth for hunting fish.

The Irrawaddy dolphin is an endangered species that inhabits freshwater and saltwater regions around Southeast Asia, the Bay of Bengal, Indonesia, Papua New Guinea, and northern Australia. Major threats to their survival include getting trapped in fishing nets, water pollution, and the building of dams.

According to a report from the International Journal of Comparative Psychology, “as higher-order thinking mammals with large brains, it is widely accepted that [whales and dolphins] are intelligent beings capable of complex cognition and social bonding.” The same report illustrates evidence that Irrawaddy dolphins are “aware of and curious about…[deceased]” fellow dolphins, highlighting the mammals’ intelligence and emotionality.

Dolphins are among the oldest creatures on earth. To learn more about conservation efforts for endangered dolphins, visit your local conservation society or go online and check out these tips from the Dolphin Project.