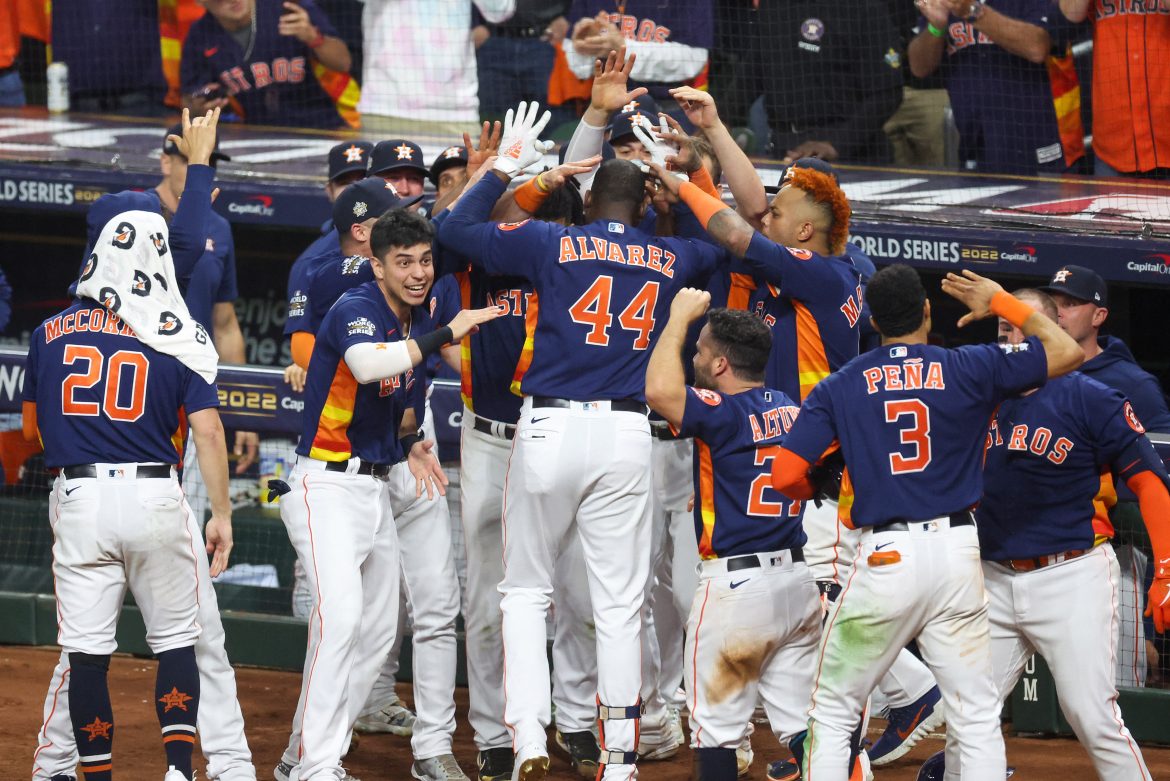 Yordan Alvarez crushed a three-run homer to power the Houston Astros past the Philadelphia Phillies 4-1 on Saturday, claiming their second World Series title in six years and first since a sign-stealing scandal in 2017 tarnished their crown.

After falling behind 2-1 in the best-of-seven series the Astros roared back with three straight wins, including just the second no-hitter in World Series history in Game Four.

Back in the Fall Classic for the fourth time in six-years the Astros arrived at Minute Maid Park for Game Six well aware the job was far from done.

In 2019 the Astros had also returned home with a 3-2 series lead but dropped both games to the Washington Nationals.

The underdog Phillies looked determined to extend the series to a Game Seven when Kyle Schwarber broke open a scoreless contest in the top of the sixth with a solo shot to right field quieting the Houston crowd.

But the ballpark was quickly back on its feet and in full throat as the Astros hit back in the bottom of the inning with Alvarez taking Phillies reliever Jose Alvarado over the wall in deep centre scoring Jose Altuve and Jeremy Pena.

Christian Vazquez’s sharply hit single would bring across Alex Bregman adding to the big inning as the Astros surged into a 4-1 lead they would not surrender.

The Astros have played with a chip on their shoulder after an MLB investigation found that the team had illegally used technology to steal opposing teams’ signs during their 2017 championship season fining the franchise $5 million and striping them of draft picks.

The scandal made the Astros one of North American sports most hated teams but their 73-year-old manager Dusty Baker is one of the most beloved.

“I think that’s what drove this team,” said Baker. “That’s what motivated them.

“The boos and the jeers that we got all over the country, it bothered these guys, but it also motivated them at the same time.

“And it wasn’t an us against the world thing. It was more of a come-together-even-closer type of thing.

“And what happened before, it doesn’t ever pass over completely.”

Baker, who earlier this year became the 12th manager to register 2,000 wins, filled the one hole on his resume by winning his first World Series as a manager.

Baker broke into the majors in 1968 with the Atlanta Braves as a teenager and won a World Series as a player with the 1981 Dodgers but it took three trips to the Fall Classic as a manager to win a title as a manager.

“I thought about it a lot,” admitted Baker. “I tried not to dwell on it, but tried to have faith and perseverance and knowing that with the right team and the right personnel and right everything that this is going to happen.

“Had this happened years ago, I might not even be here.

“I’m hoping that I gave some people the same hope that my mom and dad gave me, that sometimes it’s not in your control.”