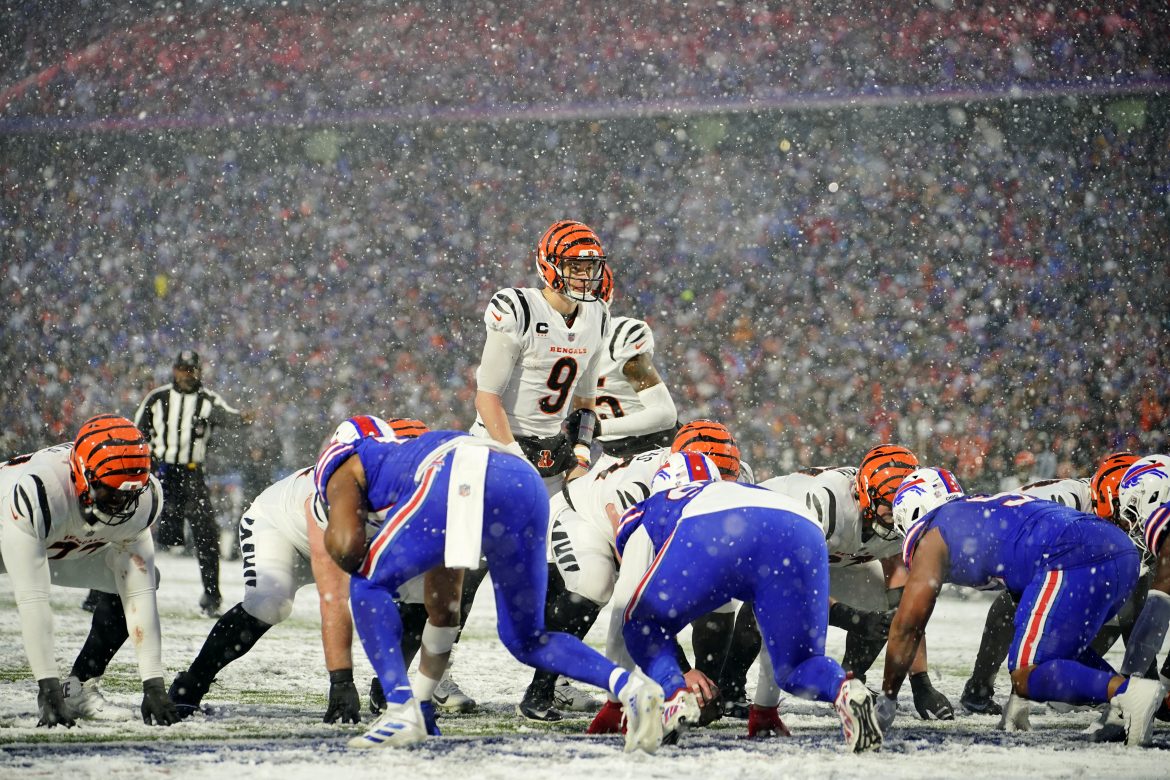 Burrow threw two touchdown passes and Cincinnati’s defense shut down Josh Allen and the Bills’ dynamic offense in a 27-10 victory Sunday to advance to the AFC championship game.

They’ll face the Kansas City Chiefs in a rematch of last year’s conference title game won by the Bengals. The Chiefs advanced with a 27-20 victory over the Jacksonville Jaguars.

In the NFC championship game, the San Francisco 49ers will face the Philadelphia Eagles to see who will advance to Super Bowl 57.

The Bills-Bengals matchup was the most anticipated game of the NFL’s divisional round because the teams’ previous meeting was canceled after Buffalo’s Damar Hamlin went into cardiac arrest on the field. The game was suspended at first and then canceled because it was too late in the season to resume.

Hamlin made a remarkable recovery and watched the game from a suite on Sunday. The sell-out crowd erupted in cheers when he was shown on the video screen making heart sign with his hands.

Cheers from the crowd as Damar Hamlin is shown on the Jumbotron. He waves his arms up and down before giving the heart gesture: pic.twitter.com/GReXlAxtUP

The Bills couldn’t draw any momentum from Hamlin’s inspirational presence as they played one of their worst games at the wrong moment.

“Even though this hurts, I’m proud of them in the way that they handled themselves with class this year in the ups and downs and the adversity they faced,” Bills coach Sean McDermott said. “They’ll take that with them, but for right now, this stings. I wish it were a different result.”

Burrow was excellent for the Bengals, ensuring the AFC’s championship game won’t be played at a neutral site. The NFL had planned to move a Bills-Chiefs game to Atlanta because Buffalo didn’t play a full 17-game schedule due to Hamlin’s situation. The league already sold 50,000 tickets for the game.

Now, the Bengals are headed to Kansas City again.

“Better send those refunds,” Burrow said of the tickets purchased.

The Chiefs advanced to the AFC Championship Game even though Patrick Mahomes suffered a high ankle sprang late in the first quarter of the game. Despite being hobbled by the injury — limping on several plays after the injury — he argued with trainers to let him stay in the game.

Mahomes was able to convince head coach Andy Reid to stick with him at halftime after x-rays came back negative. Mahomes finished with 195 passing yards and two touchdowns, including a 75-yard fourth-quarter drive that lifted Kansas City to a 27-20 win over the Jaguars.

The 49ers advanced with a 19-12 win over the Dallas Cowboys on Sunday night. San Francisco’s defense shut down Dak Prescott and the Cowboys, forcing two interceptions and holding them to 282 total yards.

“We’re just excited that we won,” Purdy said. “Everyone did their part. It’s playoff football, it’s never easy, but we’re moving on.”

It was another disappointing ending for Dallas, which hasn’t reached the conference title game since the 1995 season.

“Just disappointment,” Prescott said. “Defense gave us an opportunity to win this game. They played hard against a really, really good offense, a really good team. For us to only put up the points that we did, that’s unacceptable. It starts with me. I’ve got to be better. There’s no other way to sugarcoat it.”

The Eagles routed the New York Giants 38-7 to reach the NFC title game for the seventh time in 22 seasons. Jalen Hurts looked sharp, Philadelphia ran for 268 yards and totally dominated New York from start to finish. The Eagles ran out to a 28-0 halftime lead before slowing down in the second half.

“You work really hard for these opportunities,” Hurts said. “They’re not a dime a dozen. You work really hard for them, and I’m just very eager to continue to grow. I’m eager to go through anything and everything with this group. It’s a special thing, it’s a special feeling, and it’s a special type of togetherness that we have, and I don’t think it’s something that I’ve experienced quite like this for sure on the NFL level. We just want to continue to grow together, hold each other accountable, and believe in one another. I think we just came out hungry. That’s what it was.”