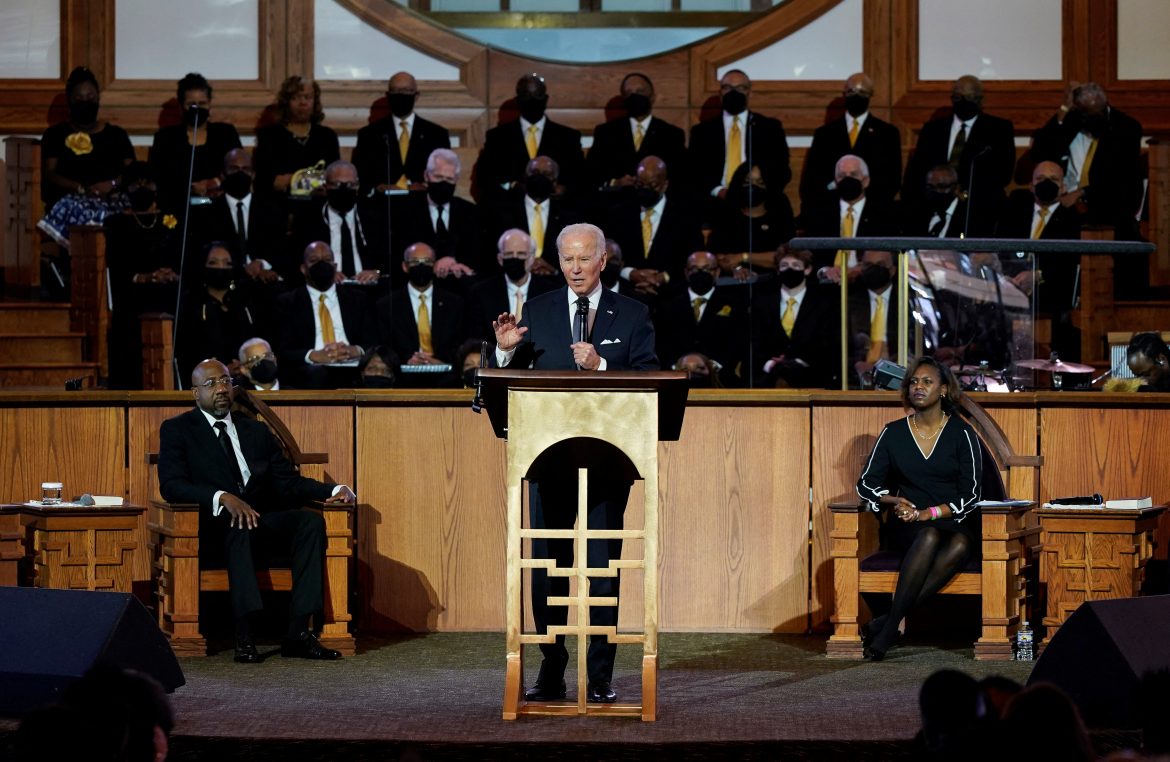 President Joe Biden made history Sunday by becoming the first sitting president in American history to deliver what has been called a sermon from the pulpit of the former church of Dr. Martin Luther King Jr.

Unlike King, Biden is not an ordained minister, but this did not stop him from taking to the lectern on Sunday and using his time before Atlanta’s Ebenezer Baptist to encode his “sermon” with more politics than spirituality.

Numerous former presidents have spoken at Ebenezer over the years, but Biden became the first to deliver a Sunday message.

Biden’s “sermon” – which was a sermon in the same way professional wrestling is a sport – was similar to a speech he gave at Ebenezer a year ago.

As with a year ago, Biden made an impassioned call for Americans to reject the policies of former President Donald Trump and his supporters – who Biden argues are agents of autocracy, hate, and racism, among other things – without mentioning Trump by name.

The only difference is that in 2022 Biden spoke before Ebenezer on a Tuesday and not during a service that was, ostensibly, meant to be a time of worship.

“Are we a people who choose democracy over autocracy?” Biden said Sunday. “You couldn’t ask that question 15 years ago, right? You would’ve thought democracy was settled – not for African Americans, but democracy as an institutional structure was settled. But it’s not, it’s not.”

Biden added, “We have to choose a community over chaos. Are we the people … going to choose love over hate? These are the vital questions of our time, and the reason why I’m here as your president, I believe. Dr. King’s life and legacy show us the way, and we should pay attention.”

The closest Biden came to connecting his message to Christianity was when he mentioned the “soul” of America or applauded King’s faith.

“He had every reason to believe, as others in his generation did, that history had already been written, that the division be America’s destiny – but he rejected that outcome,” Biden said. “So often, when people hear about Dr. King, people think his ministry and the movement were most about the epic struggle for civil rights and voting rights. But we do well to remember that his mission was something even deeper – it was spiritual. It was moral.”

Biden also inferred that the way to redeem the soul of America was to focus on economic justice, civil rights, voting rights, and protecting democracy.

WATCH: Today, President Biden delivered a sermon honoring the legacy of Dr. Martin Luther King Jr. at Ebenezer Baptist Church and emphasized that we must make progress on economic justice, civil rights and voting rights to redeem the soul of America. pic.twitter.com/9GE1C3q2sC

Ebenezer Baptist, which is pastored by Sen. Raphael Warnock (D-Ga.), was using Sunday as a means of celebrating what would have been King’s 94th birthday.

Perhaps it is just the nature of American politics, but Biden’s sermon – and this was the term used by CNN, NPR, and others to describe the nature of Biden’s remarks – did not seem to draw much anger from Christian, much less political, circles.

Biden’s visit to the church is hardly a problem. Christians should want their politicians on a pew every Sunday. But delivering a Sunday message and using the “sermon” to advance one’s political career is a different matter entirely.

It seems an uncontroversial stance to expect politicians to respect time and place when in a house of worship.

Additionally, Biden talking about social issues as what is needed to redeem the nation missed the mark of what the Bible teaches about redemption. According to scripture redemption can only be found by turning to God and trusting in his perfect work on the cross, not through the work of man.

The Bible also speaks about God’s intention for a nation in 2 Chronicles 7:14:

If My people who are called by My name will humble themselves, and pray and seek My face, and turn from their wicked ways, then I will hear from heaven, and will forgive their sin and heal their land.

We see that God’s plan for redemption, even for a nation, is for His people to repent and turn back to God.

Coincidentally, Biden was not the only former vice president to appear in a church on Sunday.

Former Vice President Mike Pence was onstage at First Baptist Dallas, one day after he discussed his new book, “So Help Me God,” at the church.

One might agree or disagree with Pence’s visit to the large Texas church, but no one can accuse him of turning the Sunday message into a political stump speech.

Pence’s Sunday visit was not classified as a sermon, and it seems he did most of his talking Saturday night. The nature of his Sunday activities was to appear during services and sign copies of his books following each.

Regardless of one’s political affiliation, it is essential that believers be careful to keep the church free from political influence. While Christians are called to be involved in this world and should be active in the political process, we must remember that God’s kingdom is “not of this world” (John 18:36).

Ultimately, our main goal as believers should always be to advance God’s heavenly kingdom, not a political one, as only He can provide eternal hope through salvation.

As debt limit approaches, Republicans dig in on spending cuts