Biden goes all in on climate issues at COP27 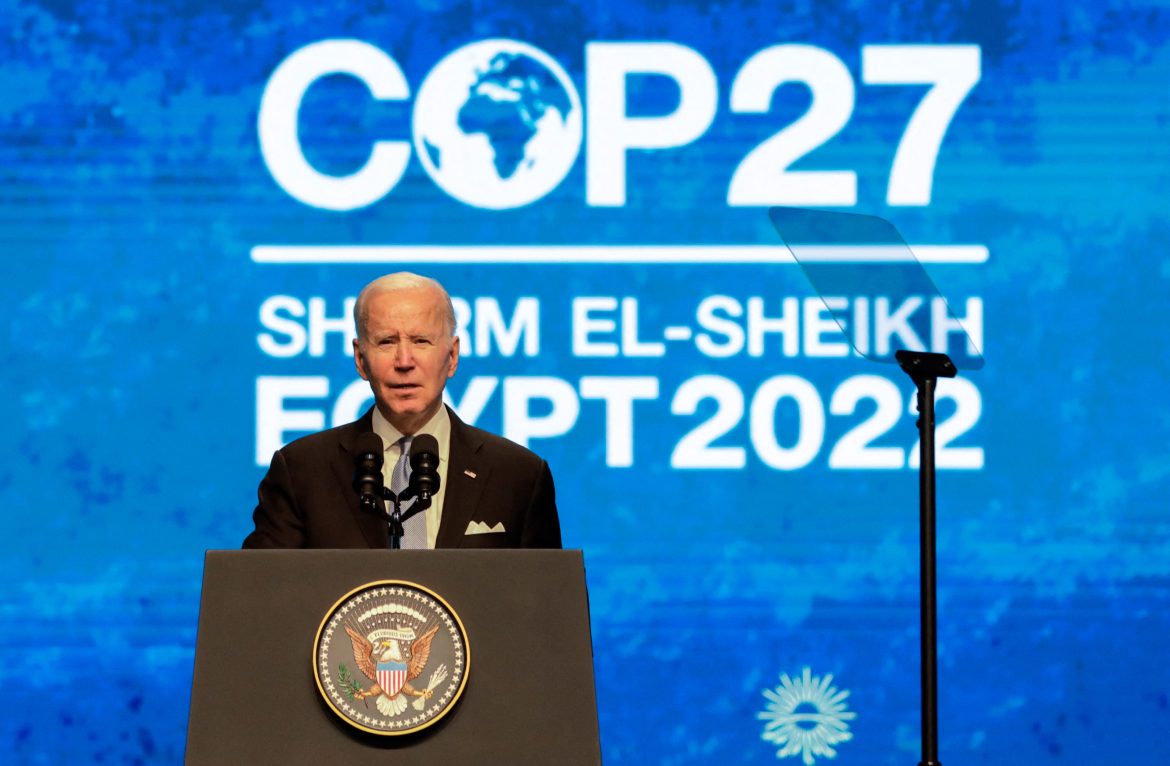 After his talk before the Convention on Climate Change Friday, no one will be able to call President Joe Biden unclear on his desires.

The president, speaking before the weeklong United Nations gathering of more than 90 heads of state in Egypt, promised the world to the world on behalf of the United States.

“Here in Egypt, the Great Pyramids and the ancient artifacts stand as testament to millennia of human ingenuity,” Biden said during his speech. “We see our mission to avert climate catastrophe and seize a new clean energy economy not only as an imperative for our present and future, but through the eyes of history.”

He later added, “The climate crisis is about human security, economic security, environmental security, national security, and the very life of the planet.”

Biden might as easily have been on the campaign trail as he spent a portion of his speech selling the Inflation Reduction Act as the “most important climate bill in the history of our country,” a phrase that should permanently end any question as to where inflation ranked in the minds of the act’s authors.

The president also apologized for the United States having pulled out of the Paris Climate Agreement under then-President Donald Trump and pledged to lower American carbon emissions to the levels outlined in the agreement by 2030.

And, in what has become Biden’s presidential calling card, he celebrated having spent big before promising to spend even more.

“[The] International Energy Agency recently concluded that our significant climate investment will, quote, help … ‘turbo-charge the emerging global clean … energy economy,’” Biden said. He added, “As the world’s largest customer, with more than[$630 billion] in spending last year, the United States government is putting our money where our mouth is to strengthen accountability for climate risk and resilience.”

Biden’s speech went over well with his audience – he was stopped for applause 19 times – but the president’s ability to deliver on his promises will be limited by more than just the fact that he will no longer be in office by 2030.

Lost on or ignored by Biden was any consideration for the fact that not even the entirety of his own party is on board with his heavy-handed approach to fossil fuels. He’s already at odds with Sen. Joe Manchin (D-W.Va.) and the coal miners who help keep the moderate Democrat in office.

His efforts to kneecap American oil and gas have made him few friends in that industry, and Republicans have been quick to pounce.

“Instead of course correcting to unleash American energy and provide Americans with some relief this winter, President Biden continues to double down on the same out-of-touch, far-left policies that led to this energy crisis in the first place,” Sullivan wrote. “It’s insane.”

Instead of course correcting to unleash American energy and provide Americans with some relief this winter, President Biden continues to double down on the same out-of-touch, far-left policies that led to this energy crisis in the first place. It’s insane. https://t.co/beyXQFTGVr

The president’s speech was also quickly criticized by climate activists who felt his billions of dollars in current and future spending fell short of their expectations.

“He announced a slew of new climate programs, but he couldn’t deliver what the developing world most wants — enough money to adapt to climate extremes,” Alice Hill, of the Climate Crisis Advisory Group and formerly the Obama administration, told Reuters.

COP27 (COP stands for Conference of the Parties and the 27 is indicative of how many years the event has existed) began on Nov. 6 and will end on Nov. 18.

Notable by their absence are Russian President Vladimir Putin and Chinese President Xi Jinping, whose nations are among the top emissions creators in the world.