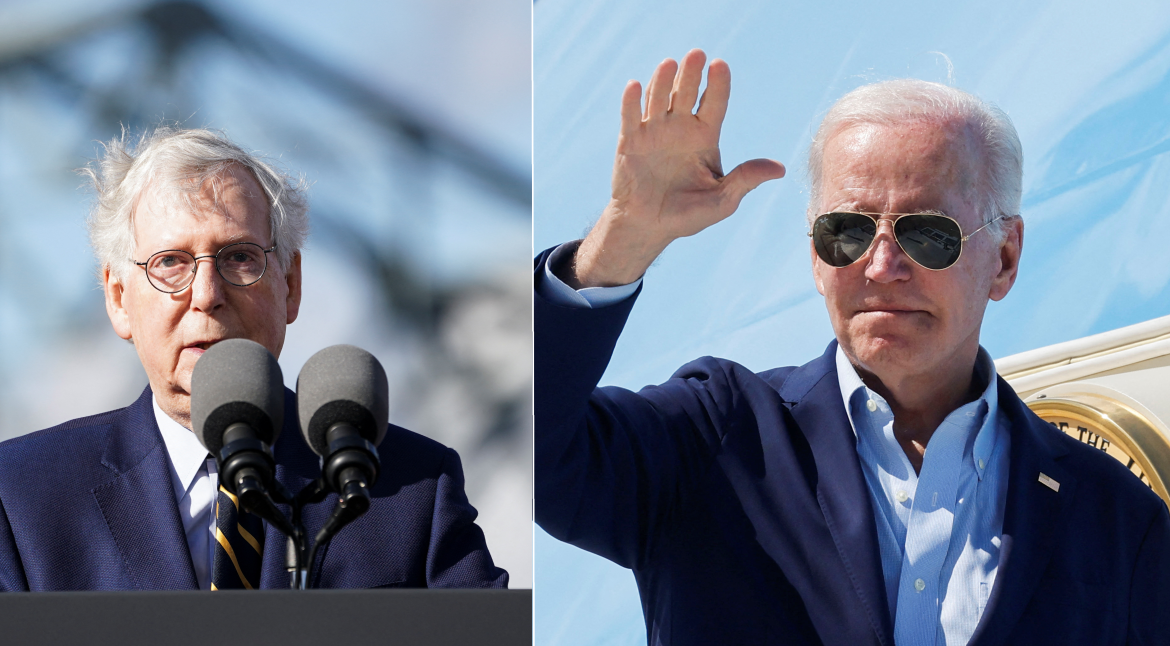 Wednesday, in a move sure to drive even more of a wedge between Senate Minority Leader Mitch McConnell and the more conservative portion of his own party, the Kentucky Senator was present as President Joe Biden lauded the $1.2 trillion bipartisan infrastructure bill and called for more cooperation between Republicans and Democrats.

Biden and McConnell were quite chummy during a speech by the president in Covington, Kentucky.

“I asked permission if I could say something nice about him,” Biden joked. “I didn’t want to — I said I’d campaign for him or against him, whichever would help him the most.”

Indeed, one could accurately call the men friends, or at least friendly, on most occasions. McConnell was invited to the White House in November to discuss numerous aspects of Biden’s agenda, and the two worked quite closely on numerous occasions when Biden was still a senator.

Even though the infrastructure bill is still arguably Biden’s greatest accomplishment as president — it is at least his least controversial — the true reason for the sudden celebration was a renewed desire by the president to show he remains atop his field in brokering deals across the aisle.

“And, you know, we have to find common ground — common ground to get major legislation done in any circumstance ever, but particularly the circumstances we’ve been in the last four or five years have been less than cooperative.”

The president was accurate in his remarks. But for McConnell and a small contingent of so-called moderate Republicans in the Senate, the infrastructure bill, gun-regulation bill, poorly named Inflation Reduction Act, and multiple government funding bills would all have failed to become law.

McConnell, who referred to the passage of the infrastructure bill as a “legislative miracle,” said, “The country needs to see examples” of the two major parties working together.

Now the longest-serving senator in the chamber, McConnell has always been known for his ability to strike a deal, sometimes within the ranks of his own party, but this willingness to negotiate has given fuel to McConnell’s critics on the right.

“If Republicans are going to fight, we ought to be fighting Mitch McConnell and his domineering, China-loving BOSS, I mean wife, [Elaine] Chow,” former President Donald Trump, referencing the infighting occurring over the speakership in the House, posted on Truth Social. “The harm they have done to the Republican Party is incalculable. Today, he couldn’t be elected ‘Dog Catcher’ in Kentucky.”

It is unclear if Trump’s assessment of McConnell is accurate, or if he would fare well if he chose to run again in 2026.

The interesting thing about being a Senator is that one only needs to concern himself with a single state, and McConnell, through his haggling with Democrats, has brought a mass of money into Kentucky.

Indeed, part of the reason Biden spoke in Kentucky this week was to announce that $2 billion from the infrastructure bill was being used to repair and upgrade numerous prominent bridges around the nation. One of those structures was the Brent Spence Bridge, which spans the Ohio River and connects Cincinnati with Convington, Kentucky.