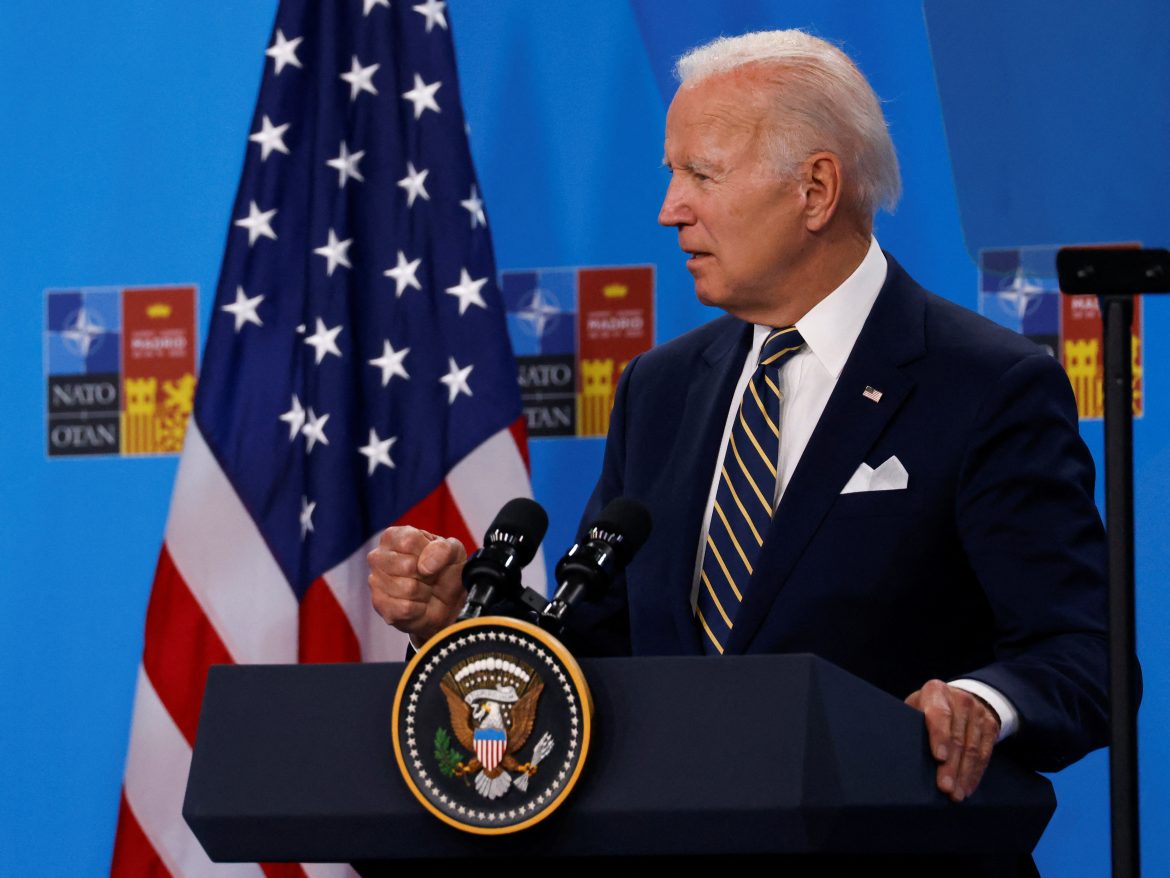 President Biden said American drivers will endure pain at the pump for “as long as it takes” until Russia is defeated in Ukraine.

The president made the remarks at a press conference in Madrid on Thursday after the wrap-up of a three-day NATO summit. During a rare Q&A session with reporters, Biden was asked how long Americans can expect to continue to pay record-high gas prices.

“As long as it takes,” he replied, adding, “Russia cannot, in fact, defeat Ukraine and move beyond Ukraine.”

“This is a critical, critical position for the world,” he continued, once again blaming high gas prices on Russia’s war on Ukraine.

The president reiterated the actions his administration has taken to address skyrocketing fuel costs, including releasing a million barrels of oil per day from the U.S. oil reserve, plus efforts to enlist other nations in releasing a total of 240 million barrels from the Strategic Petroleum Reserve.

Biden also reminded reporters that he wants Congress to pass a gas tax holiday and has asked states to follow suit.

“If we do these things, it’s estimated that we could bring down tomorrow—if they, Congress, agreed and the states agreed—we could bring down the price of oil by a dollar a gallon at the pump in that range,” Biden said, adding that these actions could provide “immediate relief.”

“And so that’s the way in which I think we should move, and I think it would have a positive impact on the price at the pump as well,” he said.

The president repeated his claim that the blame for record-high inflation and gas prices rests squarely on the shoulders of Russian President Vladimir Putin and his Feb. 24 invasion of Ukraine.

Republican lawmakers were quick to call Biden out for ignoring calls to open up domestic oil production, which they say will bring relief to struggling Americans and restore the nation’s energy independence.

“President Biden really thinks Americans are morons who are dumb enough to believe this. Unreal. We should be ramping up domestic energy production and making the United States energy independent again,” Rep. Lee Zeldin (R-NY) tweeted.

“It’s not a this or that scenario, Mr. President. Open up federal lands for oil and gas drilling, end your regulatory war on energy and start lowering gas prices for Americans. This is YOUR price hike,” Rep. Andy Barr (R-Ky.) wrote.

“Joe Biden just admitted he has no idea how long gas prices will be at record highs,” Rep. Lisa McClain (R-Mich.) posted. “Here’s an idea to fix it: UNLEASH AMERICAN ENERGY.”

“‘As long as it takes,’ is Biden speak for ‘until everyone can no longer afford to drive and I completely break America and her economy,’” tweeted Erin Perrine, Vice President of Communications at Tag Strategies.

Biden seems unlikely to change his position, given that he campaigned on eliminating fossil fuel consumption in the U.S. and has consistently yielded to his party’s climate caucus in making policy decisions. His capitulation in this area appears even less likely given that he committed $200 billion in U.S. taxpayer dollars to global infrastructure focused on clean energy – along with gender equality, health systems, and communications technology – at this week’s G7 summit in Germany.

NBC reported earlier this month that U.S. officials have become increasingly worried that the war in Ukraine could drag on indefinitely.

Several current and former U.S. officials speaking on condition of anonymity told the news outlet that they wish Ukrainian President Volodymyr Zelenskyy would “dial it back a little bit,” in terms of his hardline rhetoric that he will never cede territory to Moscow in an effort to broker an agreement to end the war. The issue, however, has grown increasingly fraught in light of the fact that President Biden remains intransigent in his insistence that the U.S. will not pressure Zelenskyy into making any decisions one way or the other.