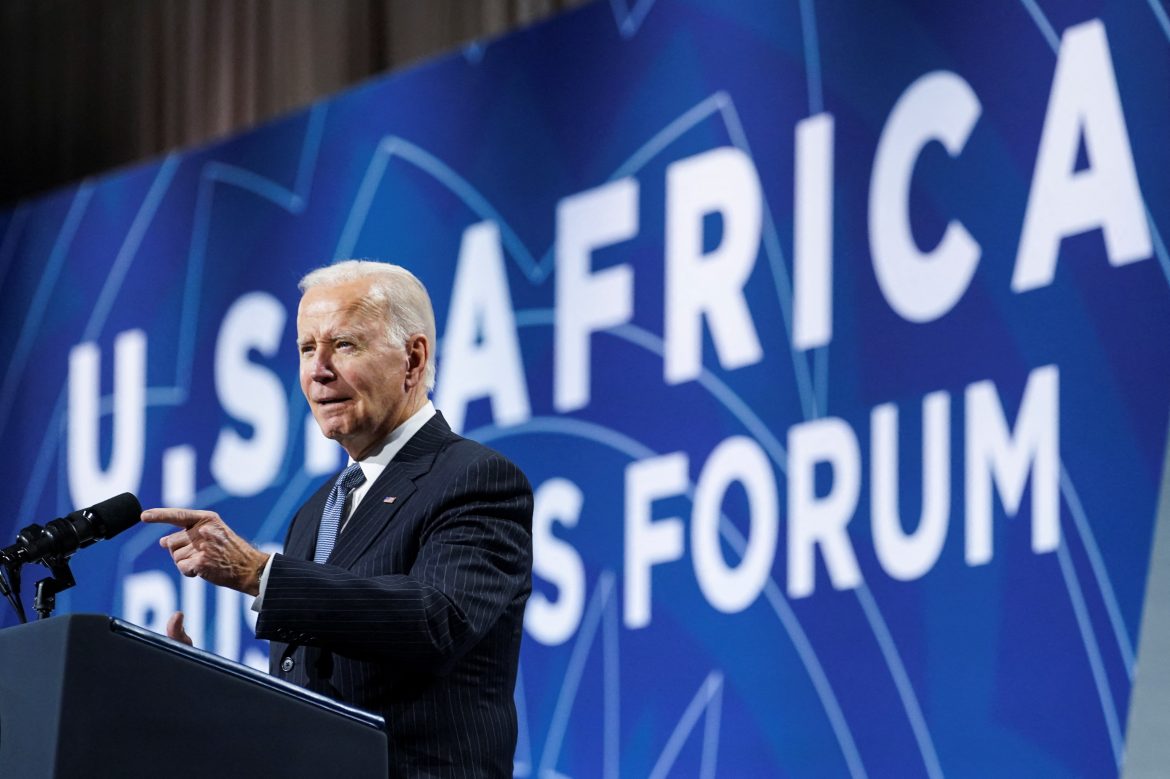 President Joe Biden announced an agreement aimed at bolstering trade ties between the United States and Africa after years in which the continent took a back seat to other U.S. priorities as China made inroads with investments and trade.

“The United States is ‘all in’ on Africa‘s future,” Biden told African leaders from 49 countries and the African Union at a three-day summit in Washington that began on Tuesday.

Biden’s remarks, and the summit, aim to position the United States as a partner to African countries amid competition with China, which has sought to expand its influence by funding infrastructure projects on the continent and elsewhere.

Chinese trade with Africa is about four times that of the United States, and Beijing has become an important creditor by offering cheaper loans – often with opaque terms and collateral requirements – than Western lenders.

Biden said a new agreement with the African Continental Free Trade Area will give American companies access to 1.3 billion people and a market valued at $3.4 trillion. He listed companies that had made deals at the summit, including General Electric Co and Cisco Systems Inc.

“When Africa succeeds, the United States succeeds. Quite frankly, the whole world succeeds as well,” the president said.

During a White House dinner honoring African leaders and their spouses, Biden addressed what he called America’s “original sin” – the enslavement of millions of people – and honored their descendants and the broader African diaspora community in the United States.

“Our people lie at the heart of the deep and profound connection that forever binds Africa and the United States together,” he said. “We remember the stolen men and women and children were brought to our shores in chains, subjected to unimaginable cruelty.”

Singer Gladys Knight later serenaded Biden and the visiting leaders with a performance in the White House State Dining Room.

The summit is the first of its kind since one in 2014 under President Barack Obama, himself the son of an African father. To kick it off, the Biden administration has pledged $55 billion for food security, climate change, trade partnerships, and other issues. Biden is also expected to back the African Union’s admission as a permanent member of the Group of 20 major economies during Thursday’s summit events.

Some conservatives criticized some of Biden’s proposed plan, saying it was forcing American tax dollars to fund climate change initiatives that would create more energy instability in Africa.

As if driving up your energy bills by shutting down coal plants at home wasn’t enough, they’re making you subsidize the same thing 8,000 miles away.

The summit is part of a renewed push to boost ties as China gains influence with trade, investment, and lending drives. Beijing has held its own high-level meetings with African leaders every three years for over two decades.

Some U.S. officials have been reluctant to frame the gathering as a battle for influence. Biden did not mention China in his remarks, and Washington has toned down criticism of Beijing’s lending practices and infrastructure projects. 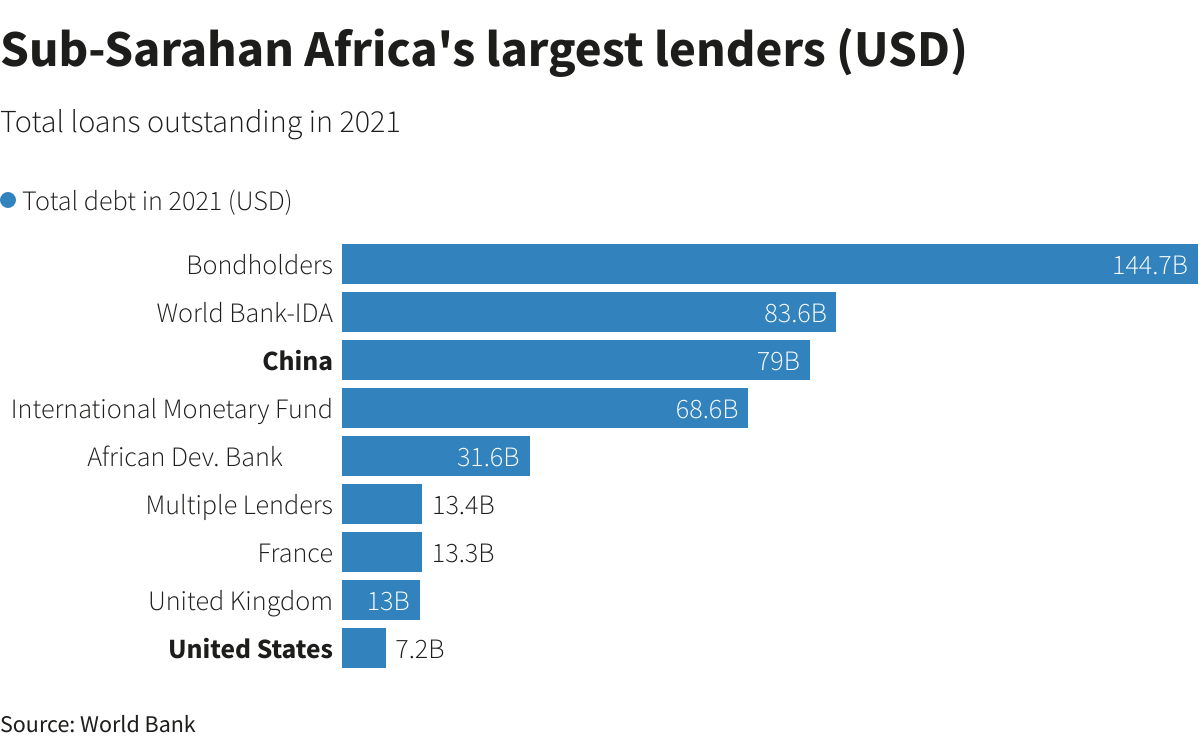 On Wednesday, White House national security spokesman John Kirby highlighted the importance of U.S. investments in Africa and said Washington was looking for a “two-way discussion” about trade, investment, and opportunities for economic growth.

“Instead of exporting commodities, the U.S. should find an opportunity in investing,” Kenyan President William Ruto said. “They have the machinery, they have the know-how, so that they can produce for the African continent in Africa.”

Ruto cited projections that Africa‘s agribusiness sector will more than triple to $1 trillion by 2030 and said U.S. capital can help solve the continent’s physical infrastructure deficit to unlock this growth.

At the end of the meetings yesterday, Biden vowed that he planned to visit the continent in a somewhat bizarre statement.

Some conservatives quickly pointed out that Biden has pledged to go to Africa before committing to make a trip to the southern U.S. border.

Anywhere but his own border: "Biden expected to announce presidential trip to sub-Saharan Africa." WaPo

According to a Eurasia Group analysis, in 2021 China-Africa trade, at $254 billion, greatly outstripped U.S.-Africa trade, which stood at $64.3 billion. Those figures are up from $12 billion and $21 billion, respectively, in 2002.

Western leaders have sharply criticized what they see as Beijing’s foot-dragging in addressing the heavy debt burden facing many African countries.

Beijing’s ambassador to Washington rejected the idea ahead of the summit, citing a report that African countries owe three times more debt to Western institutions while noting that Chinese-built hospitals, highways, airports, and stadiums are “everywhere” in Africa.

China remains the region’s largest bilateral investor, but its new loan commitments to Africa have declined in recent years.

It’s not all about economic sway – Washington has been alarmed by China’s efforts to establish a military foothold in Africa, including on the Atlantic coast in Equatorial Guinea.

For their part, many African leaders reject the idea that they need to choose between the United States and China.

“The fact that both countries have different levels of relations with African countries makes them equally important for Africa‘s development,” Ethiopia’s U.N. ambassador, Taye Atske Selassie Amde, told Reuters. “However, it should be known each African country has the agency to determine their respective relationship and best interest.”

US naturalization test to be redesigned in 2023