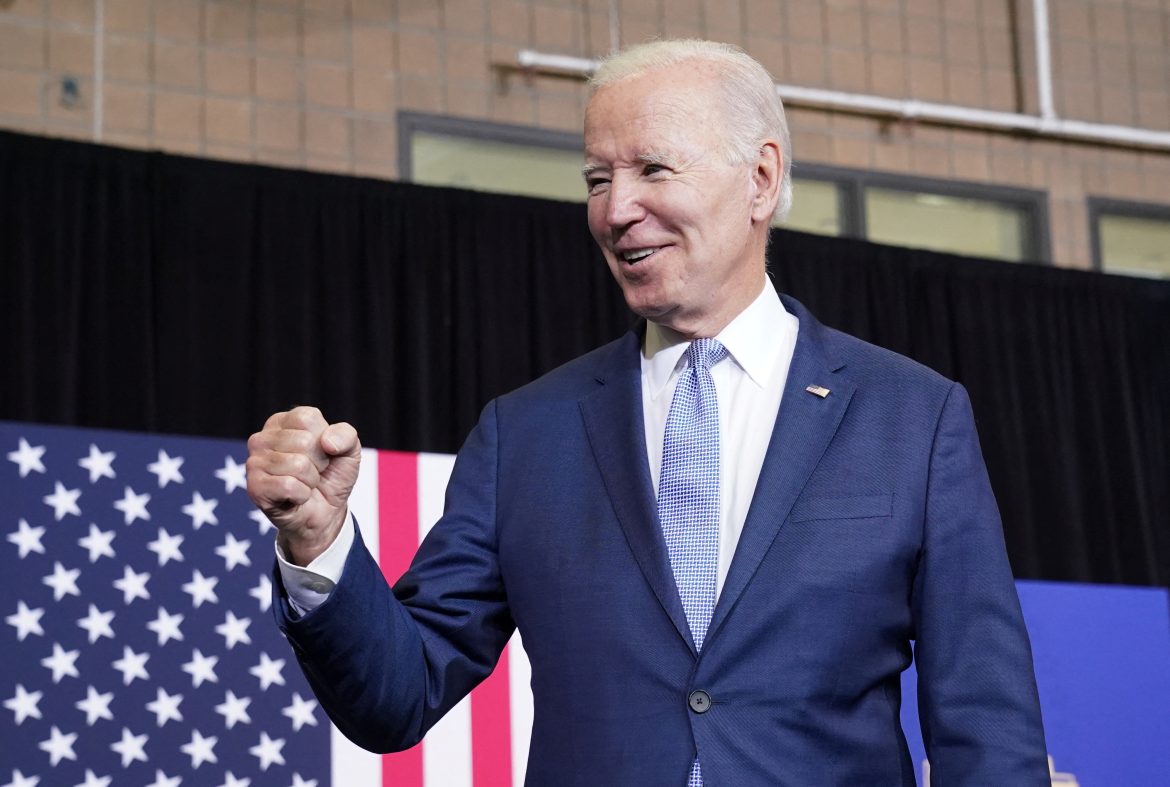 The White House is scrambling to make a dent in rising gas prices ahead of the midterms.

While prices at the pump have declined from the record highs of the summer, they are once again on the rise, with prices up 14 cents from last month — a major concern for a president whose favorability seems to rise and fall with fuel costs.

Just a month ago, falling gas prices added to a streak of wins for the Democratic party, from passing Biden’s climate spending bill to a renewed focus on abortion rights, all of which had them feeling optimistic about the elections, despite earlier predictions of a red tsunami. But rising gas prices and persistent inflation have given Republicans back their edge in a number of races in recent days.

National gas prices on Friday averaged $3.82, up from $3.68 a month ago. On this date last year, regular gasoline prices averaged $3.37 per gallon in the U.S., according to AAA.

A flurry of announcements and tweets from the president this week seem to convey a sense of alarm as he struggles to reassure American voters who overwhelmingly cite the economy and inflation as their top concerns heading into the election. In his statements, he continued to try to avoid any blame for the rising prices while pointing the finger at everyone from Putin to gas companies.

The president on Wednesday announced another dip into the dwindling strategic reserves to the tune of 15 million barrels per day (bpd), the last tranche of a 180 million bpd release announced earlier this year. The following day, he tweeted that he is asking Congress to pass permitting reforms to ramp up energy production “from wind farms to other projects.”

“This allows us to increase production while moving full-speed ahead on our clean energy goals,” he said.

Biden also doubled down on his attempts to deflect blame for rising prices, while still trying to tout his policies despite the pain consumers are feeling at the pump.

“Choices made by other countries are affecting gas prices here at home,” he said in a Thursday tweet, adding “But without the steps we’ve taken to ramp up supply and lower prices, they’d be higher.”

“We’ll keep doing everything we can to ensure our energy security and get folks the breathing room they need,” he said reassuringly.

Choices made by other countries are affecting gas prices here at home. But without the steps we’ve taken to ramp up supply and lower prices, they'd be higher.

We'll keep doing everything we can to ensure our energy security and get folks the breathing room they need. pic.twitter.com/xXVSiNFqvz

On Friday morning, Biden shifted his focus back to his favorite punching bag, oil companies, repeating the administration’s mantra that they must “pass the savings onto consumers,” a less explicit reference to previous accusations of price gouging.

The remark was made in a speech announcing a three-part plan to lower gas prices. In addition to the SPR release and vague assertions of holding oil producers and distributors accountable, Biden said the U.S. must now “responsibly increase American oil production without delaying or deferring our transition to clean energy.

“When the cost of oil comes down, we should see the price at the gas station — at the pump come down as well,” he explained, adding, “That’s how it’s supposed to work.”

“I’m focused on how we can protect American families from higher prices and give folks just a little bit of breathing room, as my dad would say,” he said.

Hours before he tweeted that energy companies were profiteering off of the Russian invasion of Ukraine, and calling them to “lower the price you’re charging at the pump to reflect what you’re paying for the product.”

Charging excess margins on gas as an unjustified war rages on Europe’s doorstep is wrong.

Energy companies: lower the price you're charging at the pump to reflect what you're paying for the product.

You'll still do well. And Americans will get a fairer price, too.

A recent decision by OPEC+ to slash oil output by 2 million barrels per day, coupled with planned refinery outages in the U.S., threatens to send gas prices soaring even higher at the worst possible time for Democrats.

Steve Bannon sentenced to four months for contempt of Congress