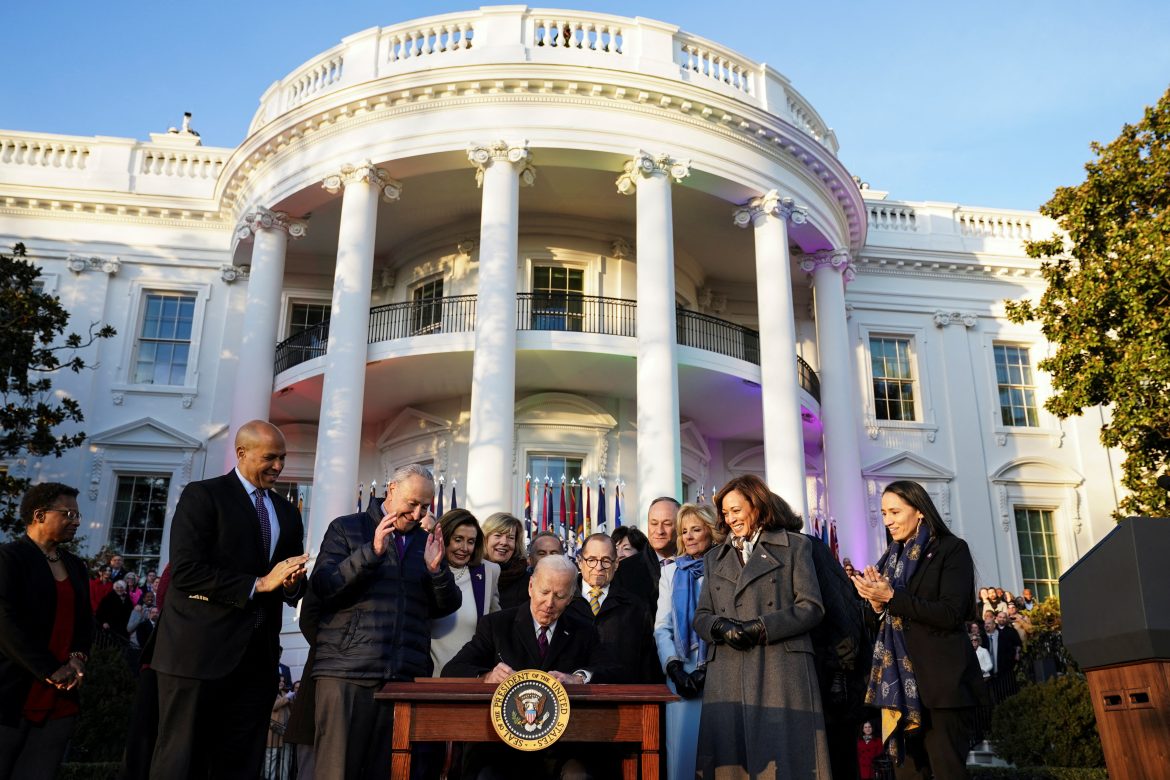 President Biden signed the so-called “Respect for Marriage Act” into law Tuesday afternoon, codifying marriage rights for same-sex couples, after a 258–169 vote in the House and 61-36 vote in the Senate.

The bill repeals the “Defense of Marriage Act” that President Clinton signed into law in 1996 and that recognized marriage as “only a legal union between one man and one woman as husband and wife and defines a spouse only as a person of the opposite sex.”

Biden was one of the senators who voted for DOMA as well as a bill two years prior that cut off federal funding to schools that taught acceptance of homosexuality. But things have changed.

During the signing ceremony for the bill, Biden said, “This law and the love it defends strike a blow against hate in all its forms. And that’s why this law matters to every single American.” Biden later added, “Racism, antisemitism, homophobia, transphobia, they’re all connected. But the antidote to hate is love.”

Biden’s comments, like similar messaging surrounding the bill, suggest that anyone who opposes the bill, specifically same-sex marriage, is homophobic. Many religious people and organizations oppose the bill due to their adherence to the Bible and its specific instruction on marriage and the practice of homosexuality. However, far from considering themselves homophobic, many Christians believe that showing love to any human includes sharing and upholding the truth of God.

Following the Dobbs decision, Democrats began a renewed push for a statute that would protect same-sex unions, and yesterday’s bill signing was the conclusion of that push.

A recent FISM article touched on how the bill passed Congress with bipartisan support, and it was clear from the beginning that Biden would sign the bill into law, but there are still many who disagree with the new law.

As the nation’s second Catholic president, Biden’s support, signing, and subsequent celebration of the bill is concerning for many within the Catholic Church. The National Catholic Register said that this bill marked “yet another step in his [Biden’s] political descent into complete rejection of what the Church teaches about the truth and meaning of marriage.”

The U.S. Conference of Catholic Bishops wrote, “Decades of social and legal developments have torn sexuality, childbearing, and marriage from each other in the public consciousness. Much of society has lost sight of the purpose of marriage and now equates it with adults’ companionship.”

Aside from being against Biden’s professed faith and the belief of Christians in general, many believe that churches and people of faith will lose their rights to free speech and be opened up to more predatory litigation if their beliefs keep them from recognizing same-sex unions.

An article from the “Alliance Defending Freedom” describes four ways that the new law threatens the institution of marriage:

It further embeds a false definition of marriage in the American legal fabric.

It jeopardizes the tax-exempt status of nonprofits that exercise their belief that marriage is the union of one man and one woman.

It could make religious freedom and free speech cases harder to win.

It could result in predatory litigation by activists against faith-based social-service organizations that could mire Americans in courts for years to vindicate their rights under the First Amendment.

The signing event was attended by celebrities like Cyndi Lauper and Sam Smith along with Treasury Secretary Pete Buttigieg. Also in attendance, invited by the President, were two drag performers Brita Filter and Marti G. Cummings. The decorations included rainbow spotlights being aimed at the White House during the daytime event.