Biden vilifies Republicans as threats to democracy in unscheduled speech 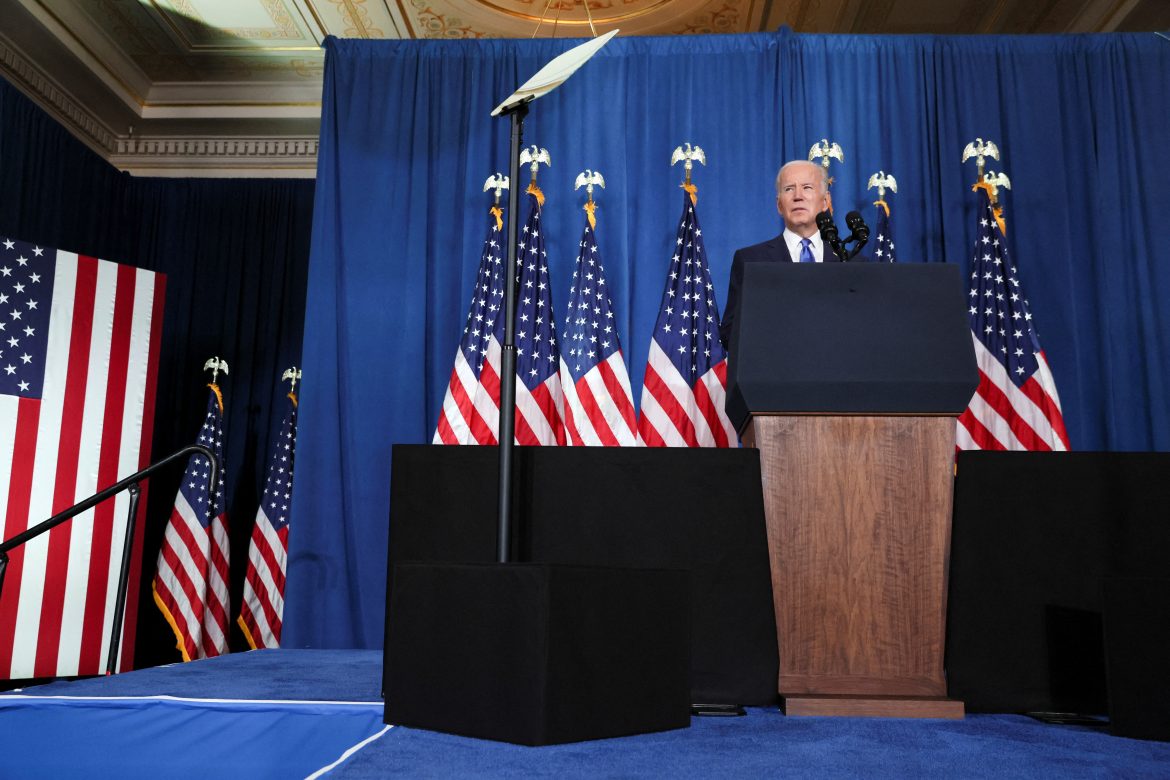 President Joe Biden expended the last of his fresh rhetorical ammunition Wednesday night. In a stump speech that he dressed as an urgent televised address to the nation, Biden attempted to paint some number of Republicans ⁠— he remained imprecise on how many ⁠— as a pressing threat to democracy.

Biden, who is attempting to salvage the 2022 midterm for Democrats, recently grabbed headlines when he dusted off classic Democrat talking points like Social Security and Medicare.

Wednesday, he opted for a more contemporary approach to criticizing the right ⁠— linking Republicans to former President Donald Trump, threats to democracy, election denial, and the Jan. 6 riot.

The last time Biden took to the airwaves, it was to attack MAGA Republicans, an effort through which he managed little more than to prove he or his handlers either: 1) lack a basic understanding of how lighting and scenery affect how people are likely to interpret what they see on television, or 2) that they genuinely wanted to invoke images of authoritarian dictators from movie screens and history books.

On this occasion, Biden managed to avoid looking like the second coming of an Orwell villain ⁠— someone thought to replace red lighting on a black backdrop with standard lighting and American flags ⁠— but it remains to be seen if his message will resonate.

“President Biden is trying to divide and deflect at a time when America needs to unite — because he can’t talk about his policies that have driven up the cost of living,” Rep. Kevin McCarthy (R-Calif.), the presumptive next Speaker of the House, tweeted. “The American people aren’t buying it.”

President Biden is trying to divide and deflect at a time when America needs to unite—because he can’t talk about his policies that have driven up the cost of living.

The American people aren’t buying it.

Biden, though, went for the hard sell.

“Make no mistake,” he said. “Democracy is on the ballot for all of us.”

Later in the speech, Biden, who once pushed for nationwide vaccination mandates, added, “Democracy’s imperfect. It always has been. But you’re all called to defend it now, now. History and common sense tell us that liberty, opportunity, and justice thrive in a democracy, not in an autocracy.”

The speech was, predictably, poorly received by Republicans. Like McCarthy, other conservatives labeled Biden’s effort as an attempt to distract Americans from his failures in the area of the economy, security, and general quality of life.

Even before the speech, at least one major conservative figure blasted the effort.

“President Biden is slated to give a speech at Union Station in Washington, D.C. tonight,” Sen. Ted Cruz (R-Texas) tweeted before the speech. “The location is a perfect symbol of his presidency so far: Rampant crime and struggling businesses.”

“Joe Biden just proved to Americans that he doesn’t care that you can’t afford gas, can’t afford food, that our borders are invaded, and you’re victims of crime just like Paul Pelosi,” Greene wrote. “They only care about attacking Trump. That’s it. Trump didn’t cause our problems, Biden did.”

Biden didn’t use the word Donald or Trump, but the former president factored into a portion of the speech.

The president dedicated substantial time in his speech to drawing a comparison between the Jan. 6 Capitol riot with the attack on Pelosi by a deranged individual who Democrats and Biden say acted because he believed the 2020 election was stolen.

“It’s hard to even say. After the assailant entered the home asking: ‘Where’s Nancy? Where’s Nancy?’” Biden said. “Those are the very same words used by the mob when they stormed the United States Capitol on January the 6th when they broke windows, kicked in the doors, brutally attacked law enforcement, roamed the corridors hunting for officials, and erected gallows to hang the former vice president, Mike Pence.”

Biden then transitioned to the midterms, the first major national election to occur since 2020 and one the president said he expects to feature a massive turnout.

“We want Americans to vote,” Biden said. “We want every American’s voice to be heard. Now we have to move the process forward. We know that more and more ballots are cast in early voting or by mail in America. We know that many states don’t start counting those ballots till after the polls close on Nov. 8.

“That means in some cases we won’t know the winner of the election for a few days — until a few days after the election. It takes time to count all legitimate ballots in a legal and orderly manner. It’s always been important for citizens in the democracy to be informed and engaged. Now it’s important for a citizen to be patient as well.”