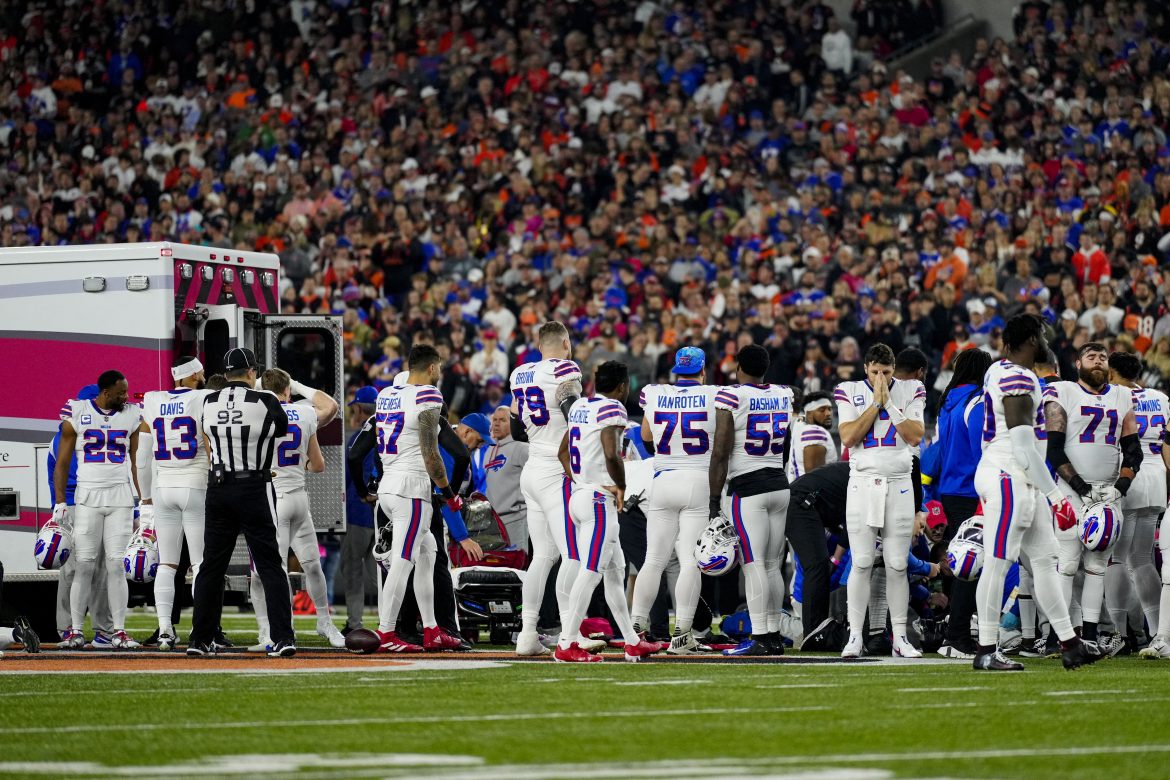 Buffalo Bills safety Damar Hamlin suffered a cardiac arrest and was in critical condition after making a tackle during Monday night’s game against the Cincinnati Bengals.

Hamlin was down for 19 minutes before an ambulance took him off the field in a scary scene that forced the NFL to suspend the game.

“Damar Hamlin suffered a cardiac arrest following a hit in our game versus the Bengals. His heartbeat was restored on the field and he was transferred to the UC Medical Center for further testing and treatment,” the Bills said in a statement released early Tuesday. “He is currently sedated and listed in critical condition.”

Hamlin was injured while tackling Bengals receiver Tee Higgins, who hit him in the chest with his shoulder. Hamlin got up, stumbled, and collapsed to the ground.

Hamlin’s teammates were in tears and many gathered to pray on the field when the NFL community offered prayers on social media throughout the night.

The league postponed a pivotal game about one hour after the play occurred. The league was heavily criticized when ESPN broadcasters said both teams were given five minutes to warm up and resume playing. Instead, the coaches met and went to the locker room with their players.

“I’m not sure where that came from,” league executive Troy Vincent said of the report. “Frankly, there was no time period for the players to get warmed up. Frankly, the only thing that we asked was that [referee] Shawn [Smith] communicate with both head coaches to make sure they had the proper time inside the locker room to discuss what they felt like was best. So I’m not sure where that came from. Five-minute warmup never crossed my mind, personally. And I was the one . . . that was communicating with the Commissioner. We never, frankly, it never crossed our mind to talk about warming up to resume play. That’s ridiculous. That’s insensitive. And that’s not a place that we should ever be in.”

Hamlin’s teammate Stefon Diggs went to the hospital while fans from both teams gathered outside the emergency room with lit candles to pray.

Hamlin played parts of five seasons in college at Pittsburgh — his hometown. He appeared in 48 games for the Panthers and was second-team All-ACC as a senior. He was voted a team captain and was picked to play in the Senior Bowl.

The Bills drafted Hamlin in the sixth round in 2021. Hamlin played in 14 games as a rookie and then became a starter this season after Micah Hyde suffered a season-ending injury earlier this season.

Hamlin began organizing an annual Christmas toy drive in his hometown of McKees Rocks, Pa. in 2020. Fans began donating to a community toy drive organized by Hamlin and the event surged to more than $3.13 million in donations by early Tuesday. His stated goal was $2,500.

Bills offensive lineman Rodger Saffold described Hamlin as a “kind, caring, extremely hard worker” in a post on Twitter. Saffold wrote that Hamlin is “loyal, honest and can always put a smile on your face. He is more than an athlete, he is a son and brother. I pray God gives him mercy and brings him back to us.”

The NFL said in a statement: “Hamlin received immediate medical attention on the field by team and independent medical staff and local paramedics. He was then transported to a local hospital where he is in critical condition. Our thoughts are with Damar and the Buffalo Bills. We will provide more information as it becomes available. The NFL has been in constant communication with the NFL Players Association which is in agreement with postponing the game.”

Ukraine update: Russian fury grows in aftermath of deadly strike on military base that killed dozens of troops