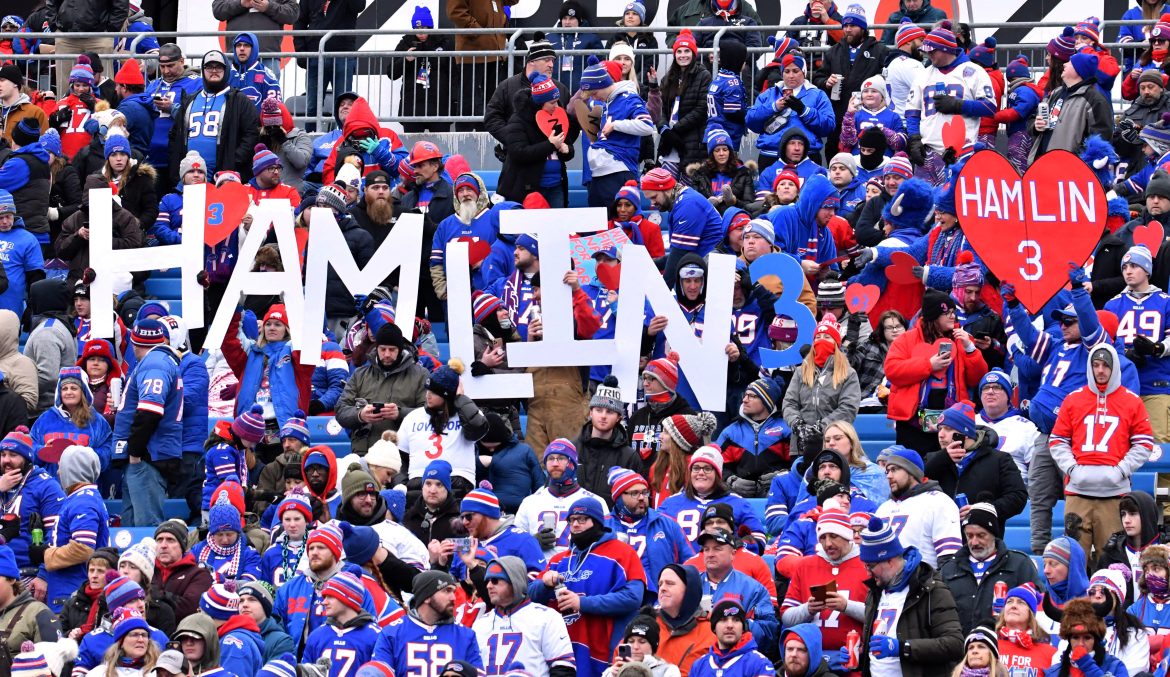 Josh Allen walked down the sideline telling teammates “God’s real” on Sunday during the Buffalo Bills’ final game of the NFL regular season.

The remarkable recovery of teammate Damar Hamlin followed by extraordinary moments during the Bills’ 35-23 victory over the New England Patriots on Sunday inspired Allen to bear witness.

On the first play of the game, Nyheim Hines returned the opening kickoff 96 yards for a touchdown as a raucous crowd at Buffalo’s Highmark Stadium chanted “Let’s Go Bills!”

After the Patriots took a 17-14 lead in the third quarter, Hines returned a kickoff 101 yards for a score.

Hines became the first player since Leon Washington in 2010 to have two kickoff-return touchdowns in the same game.

The Bills hadn’t returned a kickoff for a TD since Oct. 20, 2019, a span of three years and three months. Hamlin wears No. 3 and his number was on display throughout stadiums across the NFL this weekend.  There were also multiple moments throughout the weekend’s games in which players paid tribute to the Bills’ safety as the NFL community has shown a unified front in their support of Hamlin.

“It was just spiritual,” Allen said before he teared up. “I was going around to my teammates saying: ‘God’s real.’ You can’t draw that one up or write that one up any better. … Pretty cool.”

Hamlin’s health was everyone’s focus throughout the week after the 24-year-old safety went into cardiac arrest and needed to be resuscitated on the field during Monday night’s game in Cincinnati. Hamlin has made a remarkable recovery and inspired his teammates in a FaceTime call Friday.

“We’ve had so many prayers and so much support and to be able to start the game like that, it was amazing,” Hines said. “All that was for him. I felt like he was out there with us.”

Players who spoke with Hamlin said he was worried about them after an emotional week.

“Damar should not — in no way, shape or form — feel bad or apologize for him putting his teammates through this,” Bills coach Sean McDermott said. “I think we would all agree that God’s hand is in this and it has been in it from the first moment.

“When you watch how, at times, divided we can be as a country and a world, I think the thing we all recognized this week was when people can put love first and people first and come together, how powerful this country and this world can be for the good. The amount of love that people can have for one another. Maybe it took a sporting event for that to happen. But I think that’s a great example to all of us, and we should continue with that moving forward.”

The Bills secured the No. 2 seed in the AFC with the win and eliminated the Patriots.

The Kansas City Chiefs (14-3) clinched the No. 1 seed with a win at Las Vegas on Saturday. The Chiefs will have a bye next week when the playoffs start. However, a potential Bills-Chiefs AFC championship game would be played on a neutral field because the teams didn’t play an equal number of games.

The Bengals beat the Baltimore Ravens and finished with the third seed. The Jacksonville Jaguars rallied for a 20-16 victory over Tennessee on Saturday night to secure the AFC South title.

The AFC wild-card round is set:

In the NFC, the Philadelphia Eagles (14-3) clinched the No. 1 seed with a sloppy, 22-16 win over the New York Giants in Jalen Hurts’ first game back after missing two with a shoulder injury.

The Eagles set a franchise record for wins in a single season. They’ll have a bye next week.

Brock Purdy led San Francisco to a 38-13 win over Arizona, securing the No. 2 seed for the 49ers. The Minnesota Vikings beat Chicago to finish with the third seed. The Tampa Bay Buccaneers already locked up the fourth spot last week and removed Tom Brady in the second quarter of a 30-17 loss at Atlanta.

When Detroit Lions eliminated Aaron Rodgers and the Green Bay Packers on Sunday night, the NFC’s playoff field was set.

The NFC wild-card games are: