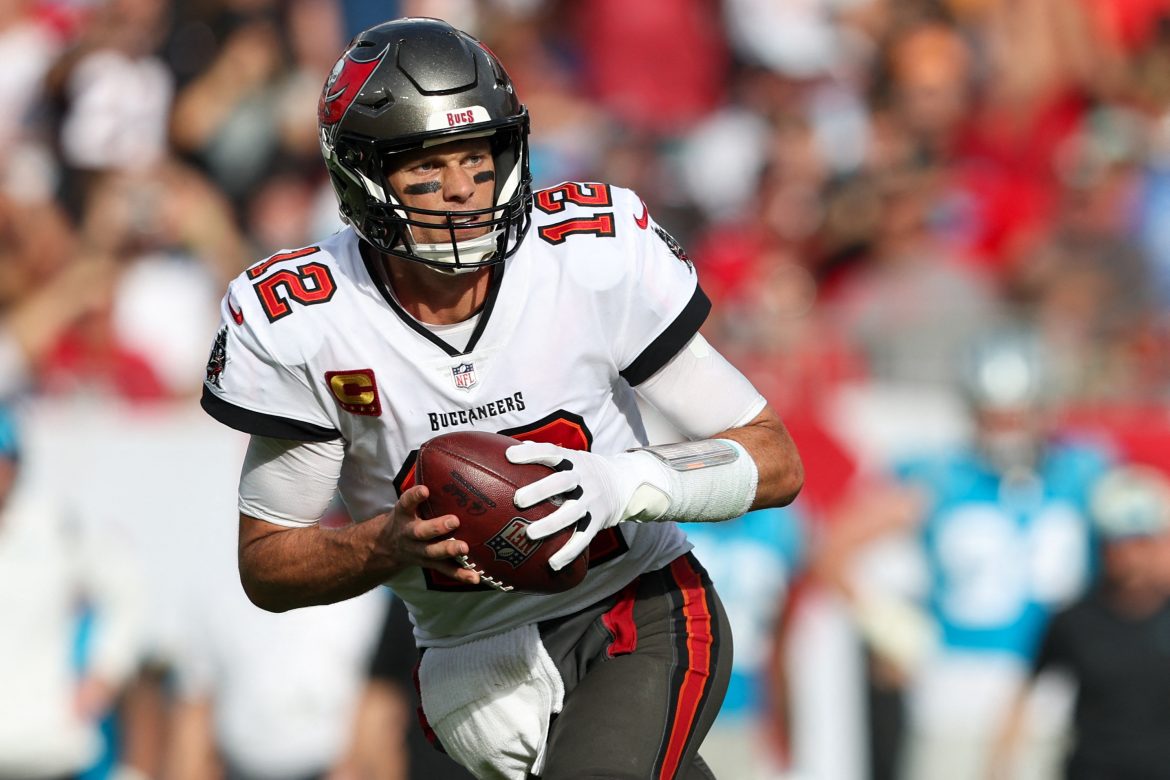 Tom Brady played one of the best games of his 23-year career to help the Tampa Bay Buccaneers win the NFC South title for the second consecutive season. The Green Bay Packers dominated the Minnesota Vikings to keep their hopes alive. The Pittsburgh Steelers also continued their late playoff push with a comeback win.

Only three playoff spots remain up for grabs in the NFL, including one division crown. The AFC South will be decided when the Jacksonville Jaguars (8-8) host the Tennessee Titans (7-9) on Saturday night.

The final wild-card spot is open in both conferences and the No. 1 seeds are still undetermined.

Brady threw for 432 yards and three touchdown passes of 63, 57, and 30 yards to Mike Evans, leading the Buccaneers to a 30-24 comeback win over the Carolina Panthers. The Bucs rallied from a double-digit deficit in the fourth quarter for the third time in their past five games.

“Mike played awesome, like he always does,” Brady said of Evans. “I love playing out there with him and he’s an amazing player. I’ve missed him too many times this year, so it was nice to connect with him and hopefully we can keep that going. I think we will.”

In Green Bay, Wis., Aaron Rodgers threw a TD pass and ran for a score while the defense forced four turnovers in a 41-17 rout over the Vikings.

The Packers (8-8) have won four in a row and would earn a playoff berth with a win at home against the Detroit Lions (8-8).

“I still believe in myself and felt like it just takes one sometimes,” Rodgers said. The Lions blew past the Chicago Bears 41-10 in Detroit. Jared Goff threw three TD passes to keep the Lions in the playoff mix.

In Baltimore, Kenny Pickett tossed a 10-yard TD pass to Najee Harris with 56 seconds remaining to give the Steelers a 16-13 win over the Ravens. The Steelers (8-8) can now make the postseason by beating Cleveland next weekend and if Miami and New England both lose.

In Seattle, Geno Smith threw two TD passes, Kenneth Walker III rushed for 133 yards and the Seahawks beat the Jets 23-6. The Seahawks (8-8) have to beat the Rams next week and hope for a loss or tie by Green Bay against Detroit to reach the postseason.

The Jets extended the longest active playoff drought in the NFL to a franchise-record 12 seasons after a 6-3 start.

In Foxborough, Mass., Kyle Dugger’s 39-yard pick-6 in the third quarter helped the New England Patriots beat the Miami Dolphins 23-21. Both teams remain in the mix for a wild-card spot. The Patriots get in with a win over Buffalo. The Dolphins need to beat the Jets and have the Patriots lose.

In Philadelphia, the New Orleans Saints handed the Eagles their second straight loss, 20-10. MVP candidate Jalen Hurts again sat out for the Eagles, who still need one win next week over the Giants to secure the NFC’s No. 1 seed.

In Las Vegas, Robbie Gould’s 23-yard field goal in overtime gave the San Francisco 49ers a 37-34 win over the Raiders. Jarrett Stidham led the Raiders to 500 yards of total offense against the stingy 49ers defense in his first career start. The 49ers (12-4) still have a shot at the No. 1 seed if the Eagles lose.

In Kansas City, Mo., Patrick Mahomes threw three TD passes to rally the Chiefs to a 27-24 win over the lowly Denver Broncos and keep Kansas City in the race for the AFC’s top seed.

In Landover, Md., Carson Wentz threw three interceptions the Commanders were eliminated in a 24-10 loss to the Cleveland Browns.

The Buffalo Bills (12-3) travel to Cincinnati to take on the Bengals (11-4). Both teams enter the game red-hot and still in the battle for the No. 1 seed in the AFC. The Bills have won six straight and the Bengals have won their last seven.