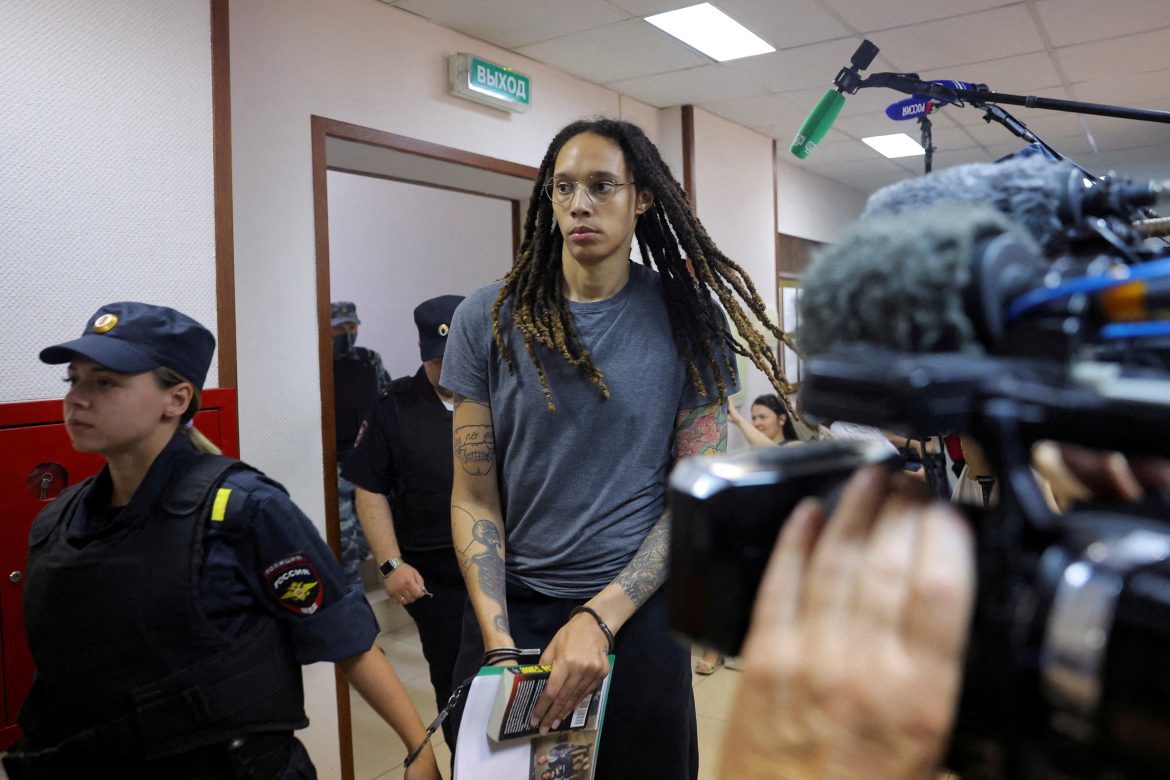 U.S. basketball star Brittney Griner has been released in a prisoner swap with Russia and is now in U.S. custody, President Joe Biden said on Thursday. Former Marine Paul Whelan was excluded from the deal to the disappointment of his family.

“She is safe. She is on a plane. She is on her way home,” Biden said in a press conference.

Tune in as I deliver an important announcement. https://t.co/2BVdSsmIFA

Biden and Vice President Kamala Harris spoke by phone with Griner from the Oval Office, a U.S. official said, adding that the call included Griner‘s wife, Cherelle. The White House released a photo of the telephone call.

In the press conference, Biden revealed that former Marine Paul Whelan was not part of the deal for Bout, though in reports for the past several months it was speculated that the U.S. was pushing that both Griner and Whelan would be part of any deal for the Russian arms dealer.

Biden ignored questions from reporters at the conclusion of the press conference who asked, “What do you say to the Whelan family who says this is a catastrophe for Paul?”

“I am greatly disappointed that more has not been done to secure my release, especially as the four year anniversary of my arrest is coming up,” he told CNN.

“I would say that if a message could go to President Biden, that this is a precarious situation that needs to be resolved quickly,” he said.

Paul’s brother, David Whelan, welcomed Griner‘s release, but said it did not bode well for his sibling. The Biden administration let the Whelan family know in advance that he would not be released along with Griner, David Whelan said.

“That early warning meant that our family has been able to mentally prepare for what is now a public disappointment for us. And a catastrophe for Paul,” he said in a statement.

Russia maintains that Whelan was involved in espionage when he went to Russia in 2018 for a wedding, which he overtly denies. Biden said that Russia is treating his case differently due to the charges against him, but vowed to continue to work towards his release.

Republican lawmaker Adam Kinzinger was critical of the Biden administration.

“So a basketball star is released, we can celebrate, but what about Paul Whelan?” he wrote in a Twitter thread. “Surely an arms dealer is worth two innocent people?”

What about retired marine who has been unjustly detained for years, Paul Whelan? Surely an arms dealer is worth two innocent people? @POTUS

“There is no place for weakness when it comes to lives of innocent Americans,” Kinzinger later added.

Rep. Ronny Jackson (Texas) said the deal would only embolden other dictators across the globe.

Biden allowed Vicktor Bout, an arms dealer convicted of conspiring to kill Americans, to walk free. This will only EMBOLDEN dictators across the globe. I can’t help but think of Paul Whelan, who’s been ABANDONED by this White House.

Griner, 32, a star of the Women’s National Basketball Association’s Phoenix Mercury, was arrested on Feb. 17. Talks to secure her release were complicated by Russia’s Feb. 24 invasion of Ukraine and the subsequent deep souring of ties between Washington and Moscow.

A two-time Olympic gold medallist, Griner was arrested at a Moscow airport when vape cartridges containing cannabis oil, which is banned in Russia, were found in her luggage.

She was sentenced on Aug. 4 to nine years in a penal colony on charges of possessing and smuggling drugs. She had pleaded guilty, but said she had made an “honest mistake” and had not meant to break the law.

Last month she was taken to a penal colony in the Russian region of Mordovia to serve her prison sentence.

Variously dubbed “the merchant of death” and “the sanctions buster” for his ability to get around arms embargoes, Bout, 55, was one of the world’s most wanted men before his arrest.