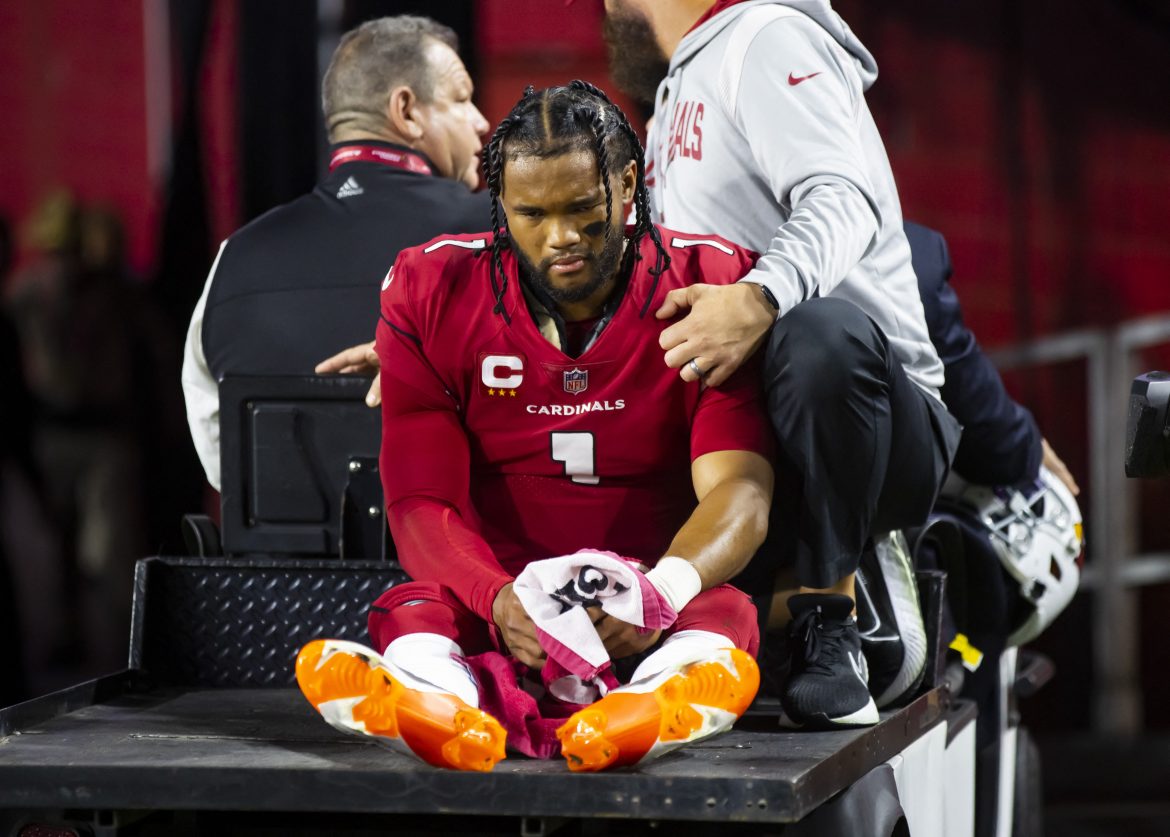 Kyler Murray is exiting early from an already difficult season, as the Arizona Cardinals quarterback has a torn anterior cruciate ligament (ACL) in his knee.

Murray suffered the injury in the first quarter of a 27-13 loss to the New England Patriots on Monday night. He was running with the ball and fell to the ground when he tried to make a defender miss.

Murray covered his head with a towel as he was carted off the field after players from both teams came over to wish him well. Cardinals coach Kliff Kingsbury on Tuesday confirmed that Murray tore the ACL in his right knee. He will need surgery. Recovery time after ACL surgery for NFL players is usually between 9-12 months, so it’s uncertain when Murray will be available to play in the 2023 season.

“That’s obviously unfortunate and tough to see, and talking to him last night, it was a tough night,” Kingsbury said. “He’s as competitive as anybody I’ve ever been around so he wanted to finish the season strong, and we’d faced a lot of adversity so far this season and we’re looking forward to this last month and trying to really build going into next year. So, definitely disappointed.”

After making the playoffs last season, the Cardinals entered this season with high expectations but are just 4-9. Murray signed a $230.5 million, five-year contract in the offseason but had the worst season of his four-year NFL career.

He threw for 2,368 yards, 14 touchdowns, and seven interceptions with a career-low 87.2 passer rating.

“He wants to come back, talking last night, bigger, stronger, faster than ever,” Kingsbury said. “And I think Joe Burrow and what he’s been able to do coming back from his (ACL injury) is encouraging for Kyler. And, so, he’s definitely up for the challenge talking to him last night.”

Burrow tore an ACL 10 games into his rookie season in 2020. He returned for the start of 2021, played 16 games, and led the Cincinnati Bengals to the Super Bowl.

“He’s never been through this type of serious injury and so it’ll be a new challenge for him,” Kingsbury said of Murray.

Murray, the No. 1 overall pick by the Cardinals out of Oklahoma in 2019, was The Associated Press Offensive Rookie of the Year and has twice been a Pro Bowl pick.

He’s expected to seek other medical opinions on the knee before having surgery. Kingsbury expects more news on the severity of the damage later this week. It’s unknown whether Murray will rehab his knee in Arizona or close to his home in Texas.

“I’m sure whoever it’s with, it’ll be done well,” Kingsbury said.

Veteran Colt McCoy replaced Murray against the Patriots and is expected to remain the starter for the final four games. The 36-year-old McCoy is 11-24 as a starter over 12 seasons with Cleveland, Washington, San Francisco, the New York Giants, and Arizona.

“I’ve played for a long time and you’ve always got to be ready. You never want to see the guy in front of you go down. You just don’t,” McCoy said. “I’ve had a lot of opportunities in my career. I’ve gotten injured, so I’m thankful to be on this team and on this squad. I love the guys that we have. We’ve battled injuries all year long and the guys that are going to go in there, they’re going to fight until the very end. I don’t think there’s any more you can ask for and I’d be proud to go lead them.”

McCoy completed 27-of-40 passes against the Patriots for 246 yards and one interception. He has several talented receivers to throw to, including De’Andre Hopkins, Robbie Anderson, and Marquise Brown.

“I don’t think I have anything to prove,” McCoy said. “I think I’ve just got to go out there and play good football, distribute the ball, keep us in third and manageable situations, and score touchdowns in the red zone. It’d be good to get a week of practice in with some of these guys.”