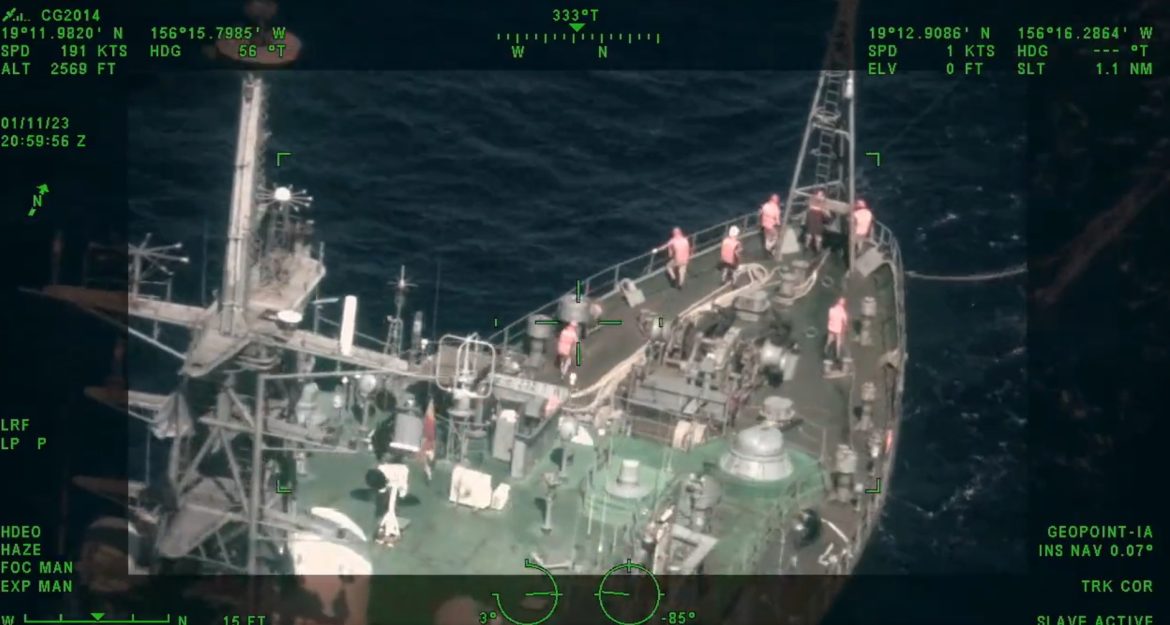 The U.S. Coast Guard released a bulletin Wednesday warning that a Russian ship located near the Hawaiian Islands could be gathering information. The military branch said the ship, which has been near Hawaii for weeks, is believed to be an “intelligence gathering ship.”

“As part of our daily operations, we track all vessels in the Pacific area through surface and air assets and joint agency capabilities,” Cmdr. Dave Milne, the Coast Guard’s chief of external affairs, said in a statement.

While foreign military vessels are permitted to transit freely through the United States’ economic exclusive zone (EEZ) in accordance with customary international law, foreign-flagged military vessels have frequently been observed operating and loitering within Coast Guard District Fourteen’s area of response, according to the USCG’s statement.

A video of the ship recorded by the military branch indicates the vessel was around 100 miles from Honolulu.

The United States Coast Guard released footage of a Russian vessel it has been tracking off the coast of Hawaii. The ship is believed to be an intelligence-gathering vessel. pic.twitter.com/c4qsrnxB9i

“The Coast Guard operates in accordance with international laws of the sea to ensure all nations can do the same without fear or contest. This is especially critical to secure freedom of movement and navigation throughout the Blue Pacific,” Milne said.

The Coast Guard says it will continue to work with Department of Defense partners to provide updates on foreign vessel movements and activities, as well as maintain an adequate presence in order to promote the adherence to international maritime rules.

The U.S. Indo-Pacific Command announced in May that it was monitoring a Russian vessel near Hawaii. During the Cold War, the Soviet Union used to dispatch espionage ships to hover near Hawaii, according to retired Marine Lt. Colonel Hal Kempfer.

“The tactics, techniques, and procedures that we saw the Soviets doing back in the Cold War seem to be resurfacing again under the Russian banner,” Kempfer said. “This looks like one of those issues that I would point to Russian intelligence ships potentially off the shore of Hawaii.”

Just weeks ago, a Russian Military and Intelligence Agencies Procurement Network was indicted in Brooklyn Federal Court. On Dec. 13, the Department of Justice released a statement citing publicly filed court documents, including a 16-count indictment that was unsealed in Brooklyn, charging five Russian nationals with conspiracy and other charges related to the network.

The five Russians, including a suspected Federal Security Service (FSB) officer, and two U.S. nationals, were charged with conspiracy and other charges due to procuring goods and laundering money on behalf of the Russian government. In breach of new U.S. sanctions imposed earlier this year, the defendants allegedly conspired to procure military-grade and dual-use technologies from U.S. businesses for Russia’s defense sector, as well as to smuggle sniper rifle ammunition.

The defendants illegally purchased and exported highly sensitive and extensively controlled electronic components, some of which can be utilized in the development of nuclear and hypersonic missiles, quantum computing, and other military applications, according to the indictment.

“The Department of Justice and our international partners will not tolerate criminal schemes to bolster the Russian military’s war efforts,” said Attorney General Merrick B. Garland.

With three of the defendants now in custody, we have disrupted the procurement network allegedly used by the defendants and Russian intelligence services to smuggle sniper rifle ammunition and sensitive electronic components into Russia. The Justice Department will continue to vigorously enforce our economic sanctions and export controls against those who enable the Russian government to continue its unjust war in Ukraine. I am grateful for the tireless efforts of the Department’s Task Force KleptoCapture, the National Security Division, the Office of International Affairs, the U.S. Attorney’s Office for the Eastern District of New York, and the FBI on this case.

“Today the Department of Justice proves once again that we will relentlessly pursue those who support the Russian war machine by evading sanctions and export controls,” said Deputy Attorney General Lisa O. Monaco. “By exposing the defendants’ smuggling of ammunition and transfer of sensitive U.S. technologies — from quantum computing to hypersonic weapons development — the Department of Justice is holding accountable those who are fueling Russia’s unlawful and unprovoked aggression in Ukraine.”

Virginia students not told about merit awards over ‘equity’ concerns