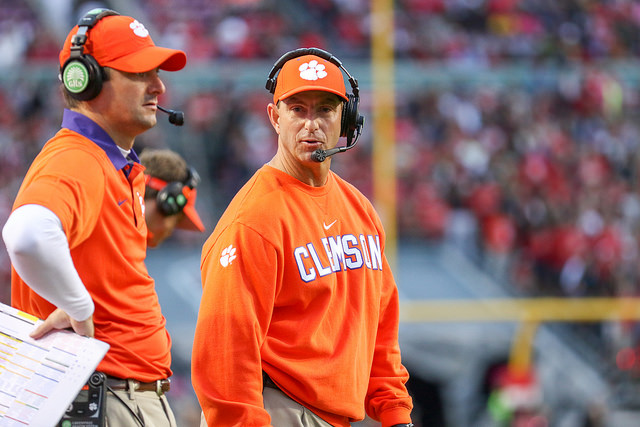 Clemson coach Dabo Swinney has been an outspoken critic of the NCAA’s NIL policy since the ban on college athletes being able to earn money for the use of their names, images, and likenesses was lifted last year.

On Wednesday, the two-time national champion coach, viewed what he calls the “professionalization” of college sports in a new light.

Honestly for me, we built this program on NIL. We really did. It’s probably different than what you’re thinking, though. We built this program in God’s name, image, and likeness. As things have changed, God has always been the foundation of what I do and so we’ve been dealing with his name, image, and likeness for a long time. So as this new era has come forward, God continues to bless us here at Clemson.

Swinney, who became a Christian at age 16, has been mocked for his opposition to the new NIL rules. Critics point out he’s one of the highest-paid coaches in college sports. Swinney signed a 10-year, $115 million extension in September.

But Swinney has said he doesn’t have a problem with players profiting off their image. He’s concerned with the sustainability of college sports because of NILs. Alabama coach Nick Saban has also expressed his concern.

Since the NCAA adopted NIL policies in 2021, numerous college athletes across the nation have signed lucrative deals with some reaching seven figures. Many players are getting these deals before they even play. Alabama quarterback Bryce Young got a significant NIL deal before his 2021 Heisman Trophy season started.

“I think there’s going to be a complete blowup … especially in football, and there needs to be,” Swinney previously told ESPN. “I think eventually there will be some type of break and another division. Right now, you got everybody in one group, and it’s not feasible. Alabama has different problems than Middle Tennessee, but we’re trying to make them all the same and it’s just not. I think you’ll have 40 or 50 teams and a commissioner and here are the rules.

“There’s so much bureaucracy, and you can’t get anything done in a real-time manner. It’s frustrating. The communication is not good, and the rules are outdated. Again, there have been a lot of positives when it comes to the scholarships, but you’ve got all these people voting on things, and it’s just not apples to apples.”

Clemson had another top recruiting class despite Swinney’s reservations with NIL deals. The Tigers are in the No. 9 spot in the Rivals.com team recruiting rankings.

Swinney began his coaching career at Alabama as a graduate assistant in 1993. He later coached wide receivers and tight ends for a decade at the school. Swinney arrived at Clemson in 2003 as a wide receivers coach. He was named head coach in 2009 and has led the program to eight ACC championships and the national title in 2016 and 2018.

His Christian faith has always been more important to Swinney than trophies.

“That’s just the priorities of my life,” Swinney told SI.com in 2021. “I think that I made a decision when I was 16 — I grew up in a family that I was taught there was a God and all that, but I didn’t really have a relationship with Christ until I was 16. And that was a game-changer for me. That’s really become the foundation of my life.”

It’s hard to survive and thrive in this world if you don’t have a spiritual foundation and have something that you can — that will give you peace, because life is hard, and we’re all going to experience death and failure and setbacks and disappointments and cancer and — it’s just a really difficult world.