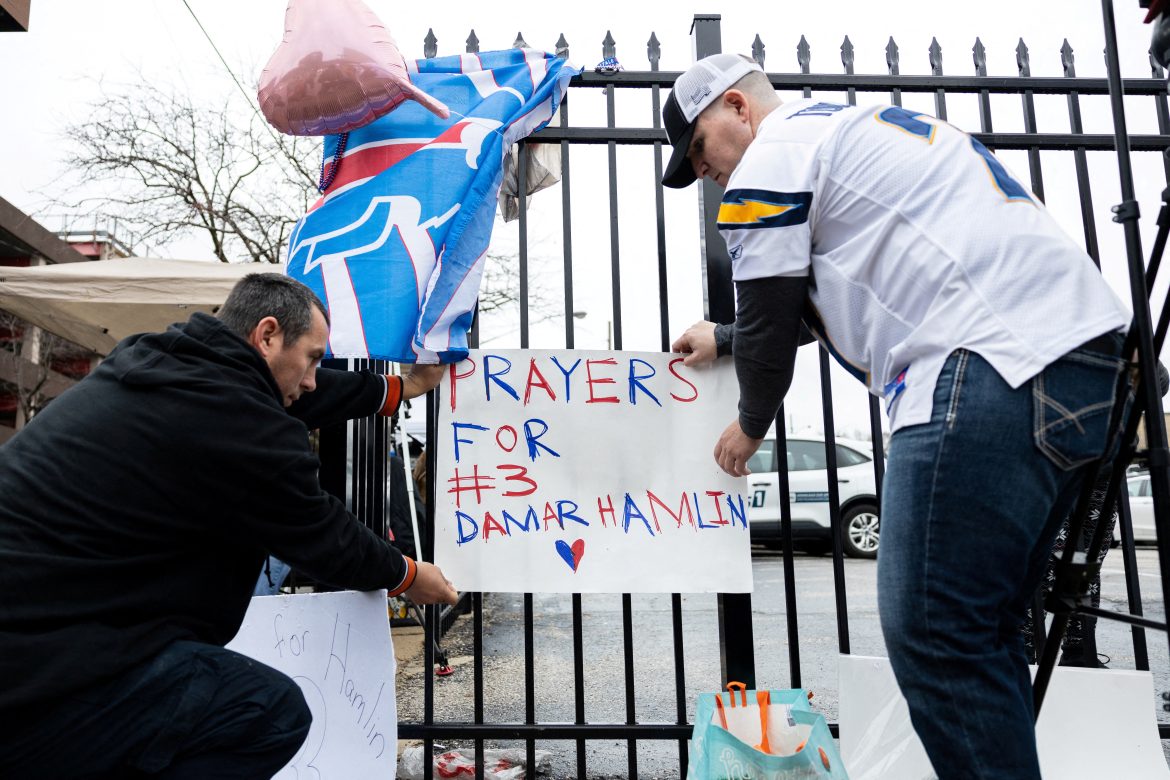 Buffalo Bills safety Damar Hamlin’s first question after going into cardiac arrest on the field during a Monday night game was: “Did we win?”

Hamlin’s doctors on Thursday described the communication with the 24-year-old player, whose heart stopped during a game and needed to be resuscitated.

“The answer is yes, Damar, you won. You’ve won the game of life.” Dr. Timothy Pritts told reporters in a conference call from the University of Cincinnati Medical Center.

Hamlin remains in critical condition and in the hospital’s intensive care unit after he began to wake up Wednesday night from sedation. Pritts said it appears his neurological function is intact so he can follow commands and move.

“He still has significant progress he needs to make, but this marks a really good turning point in his ongoing care,” Pritts said. “We know that it’s not only that the lights are on. We know that he’s home. And it appears that all the cylinders are firing within his brain, which is greatly gratifying for all of us.”

The Bills-Bengals game was suspended Monday night after Hamlin collapsed and was rushed to the hospital by ambulance. The NFL announced Thursday it will not be resumed and both teams will complete their regular season with 16 games instead of 17. There are several playoff scenarios that now must be worked out.

The Bills’ main concern is the health of their beloved teammate.

“I think for every person, it’s going to be a little bit different. I think putting that helmet back on today was a really good thing for our team,” quarterback Josh Allen said. “But I’d be lying to you if I didn’t say some people will be changed forever, you know, after being on the field and witnessing that and feeling those emotions.”

Bills coach Sean McDermott said the team received a rallying message from Hamlin’s father, Mario. He spoke to the team via a Zoom call on Wednesday.

“His message was the team needs to get back to focus on the goals they had set for themselves. Damar would have wanted it that way,” McDermott said during the team’s first media availability since Hamlin’s life was endangered. “We owe that to Damar, and we owe that to his family.”

McDermott said he has leaned on his Christian faith in this trying time.

“I’m a Christian man to begin with and I’m not afraid to say that and I know when you are trying to do good things or great things, sometimes you come across opposition. … How do I know we’ll be able to overcome? We have to.”

Dr. William Knight IV said doctors haven’t determined the cause of Hamlin’s cardiac arrest and that testing is ongoing. It’s unknown yet whether he could play football again.

“It’s been a long and difficult road for the last three days … he has made a pretty remarkable improvement,” Knight said.

Hamlin remains under sedation to accommodate the breathing tube.

“When we talk about neurologically intact, it’s a very gross term of big motor movements and following commands. When we talk about the finer things that make us human — cognition, emotion, speech, language, etc., we’re looking forward to learning more about that,” Knight said.

Former NFL player and current football analyst Benjamin Watson told CNN’s Anderson Cooper that incidents like this cause everyone to stop and think about their mortality while pointing people toward the only One who provides hope beyond death – Jesus Christ.

“The questions about what happens after this life, where will you spend eternity, as you mentioned Anderson, are coming up for all of us, not just for the football players. But thank God that He provides an answer through His son Jesus Christ. – Benjamin Watson in response to Damar Hamlin’s injury.

Life can change in the blink of an eye. Damar’s injury has made us all wrestle with this truth. It has served as a reminder of own mortality. While we pray for him as he fights for his life we must ask ourselves where will we spend eternity? Thanks for this convo @andersoncooper pic.twitter.com/WrYQWNZ4hR

Players from across the NFL and fans of all teams have rallied around Hamlin and the Bills.

Fans, team owners, including Colts owner Jim Irsay and Patriots owner Robert Kraft, and many players, including Tom Brady and Russell Wilson, have made donations to Hamlin’s Chasing M’s Foundation that he started for a to drive. More than $7.5 million by Thursday evening.

Hamlin’s dad encouraged fans to donate to the hospital caring for his son.