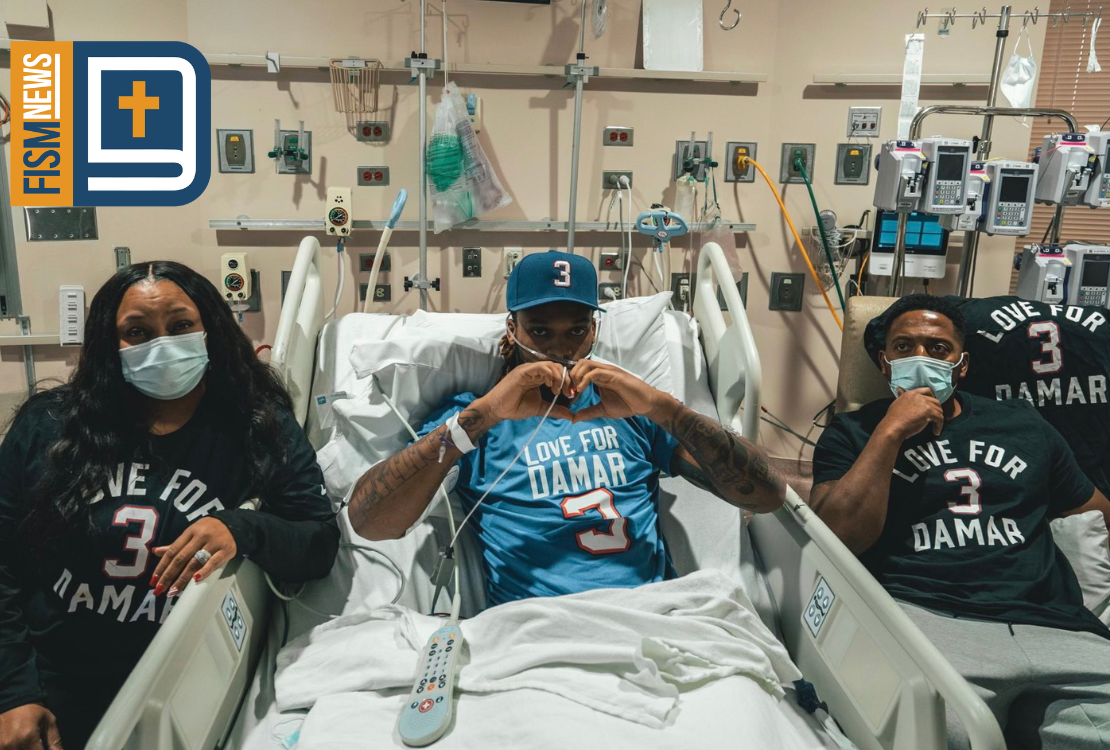 Football fans will look back on 2023 as a year that began with one of the most profound miracles in the history of professional sports.

The miracle surrounds Buffalo Bills safety Damar Hamlin, who has made a stunning recovery after one of the scariest on-field injuries in NFL history.

As FISM News previously reported, on January 2, during the Bills’ high-profile Monday Night Football clash with the Cincinnati Bengals, Hamlin made a routine tackle late in the first quarter. He got up, and then collapsed on his back as his body went into cardiac arrest. Hamlin’s heart stopped briefly, and Bills’ medical personnel rushed to the field and performed CPR to restart his heart and save his life.

Hamlin was rushed to a local hospital, where he remained in critical condition for the next few days. But as the Bills, who were joined by the NFL community and the sports world in general, waited anxiously for any good news, a remarkable thing happened.

NFL players and coaches prayed on the field. Fans prayed at home, in church, at night, and throughout the day. Even media personnel prayed. Former NFL quarterback and current ESPN NFL analyst Dan Orlovsky prayed on air:

This warms my heart! @DanOrlovsky7, @ESPN analyst & former football player, cared enough for Damar Hamlin to pray for him right there on national TV. He wasn’t afraid to say “I believe in prayer!” I do too Dan—thanks for setting an example for others to follow. pic.twitter.com/OwdagAsdtT

In an avenue where prayer is typically ignored and at times even condemned, prayer suddenly became the only response that made sense for the sports world.

The miracle of it all is as people came before the Lord asking that he spare Hamlin’s life, he made large strides in his recovery.

First, news broke that his condition stabilized. Then he woke up and began squeezing his family member’s hands. Not long after, he video-called his teammates. Reports then broke that his mental capacity had been completely restored, and his recovery inspired his team to a huge win on Sunday to lock up the #2 seed in the AFC. Then early this week, he was released from the ICU and returned to Buffalo.

Yesterday, he was discharged from the hospital altogether and is now home. This all took place within a span of nine days.

There is no denying what has taken place. God has heard the prayers of thousands, possibly millions, and spared the life of this young man.

Regardless of whether Hamlin will be able to attend a Bills playoff game, or whether he will even play football again, a miracle has taken place, and there is no one to thank except God Almighty.

I do not want us to pass by this miracle without understanding what God has done. Friends, thousands prayed, and God answered the prayer!

Oftentimes, I feel that we become calloused to this. We expect God to answer, and when He does, we pass it by.

Friends, do not ever lose the glory and magnitude of what happens in prayer. Wretched sinners, who do not deserve God’s love, come to Him with their requests. God, who owes us nothing, answers us as our loving Father.

What was especially profound about the Hamlin situation is this – there were likely thousands who prayed for his healing who do not trust in Jesus Christ. In an example of His common grace and goodwill to His whole creation, God still heard their prayers as well. What a gracious God we serve!

May this be a lesson for all Christians. We serve a God who is not silent and does not ignore the cries of His people. God delights in the prayers of His people, and it pleases Him to answer His people’s pleas.

Now please understand: God does not always answer our prayers in the way we should like. If He had let Damar Hamlin pass away, He would still be God, and despite the unimaginable pain that would have caused for so many, His good purpose and plan would still prevail. Praise God that, in His sovereign plan, He spared the life of this young man.

But friends – God always answers. Sometimes the answer is yes, sometimes it is no, and sometimes it is “I’ve got something else in store for you.” But no matter the answer, God’s supreme purpose for His people is always there – to bring glory to His name and to benefit His people, whom He loves with an everlasting love.

May we be ever more grateful and thankful for our God who hears the prayers of His people.