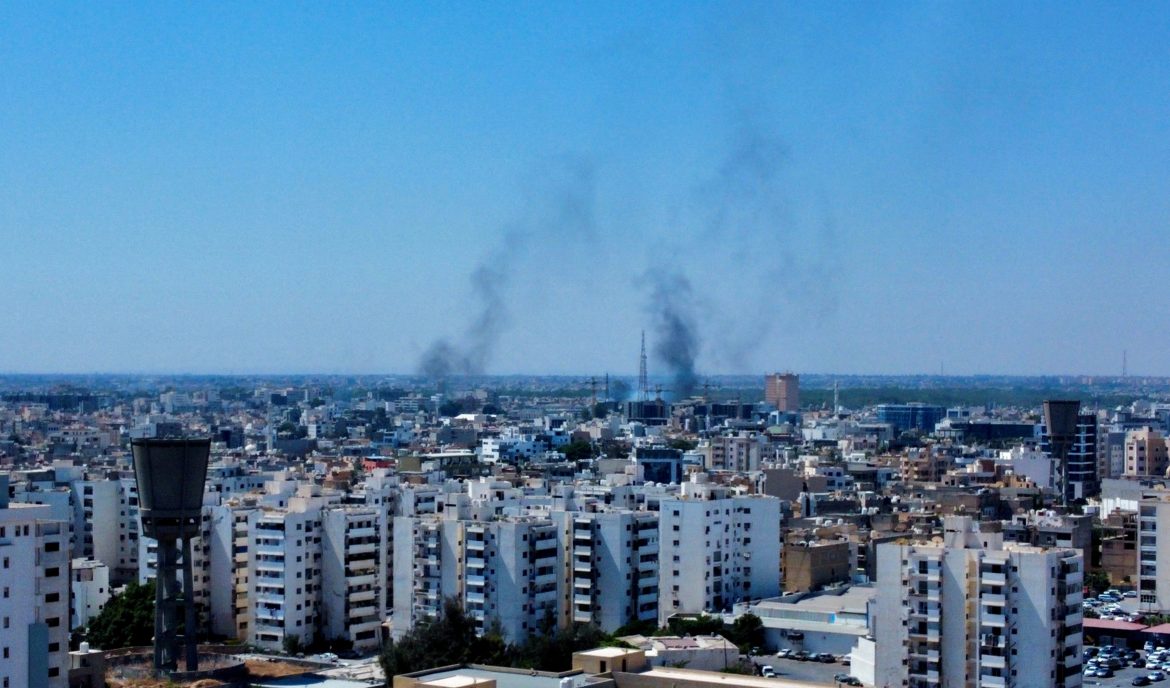 Rival factions battled across Libya’s capital on Saturday in the worst fighting there for two years as an eyewitness said forces aligned with a parliament-backed administration moved on the city to try to take power.

The Tripoli government’s health ministry gave a preliminary death toll of 12 people, with 87 injured, but did not say how many were civilians or fighters.

Sustained fighting in the city over the control of government would likely plunge Libya back into full-blown war after two years of comparative peace that brought an abortive political process aimed at holding national elections.

A months-long standoff for power in Libya has pitted the Tripoli-based Government of National Unity (GNU) under Abdulhamid al-Dbeibah against a rival administration under Fathi Bashagha that is backed by the eastern-based parliament.

Clashes erupted overnight as one of Tripoli’s main groups assaulted a base held by another, witnesses there said, leading to hours of shooting and blasts.

The fighting intensified later on Saturday morning, with small-arms fire, heavy machine guns, and mortars deployed in different central areas. Columns of black smoke rose across the Tripoli skyline and shooting and blasts echoed in the air.

Intense clashes later began in Janzour, on the coast road west of Tripoli and a possible access point for some forces aligned with Bashagha, people working in the area said.

An eyewitness meanwhile said a convoy of more than 300 vehicles affiliated with Bashagha had set off from Zlitan, about 150km (90 miles) east of Tripoli along the coastal road. Bashagha has been based for weeks in Misrata, near to Zlitan.

To the south of Tripoli, a video circulating on social media, which Reuters could not authenticate, purported to show forces of another Bashagha-aligned commander entering the Abu Salim district. Witnesses near Abu Salim said there was heavy shooting in the area.

The GNU health ministry said several hospitals and health centers had been hit in the fighting.

The United Nations Libya mission called for an immediate halt in fighting and voiced concern at shelling in civilian districts.

“This is horrible. My family and I could not sleep because of the clashes. The sound was too loud and too frightening,” said Abdulmenam Salem, a resident of central Tripoli “We stayed awake in case we had to leave quickly. It’s a terrible feeling.”

Large armed factions backing each side in Libya’s political dispute have repeatedly mobilized around Tripoli in recent weeks, with convoys of military vehicles moving around the city and threatening force to obtain their goals.

Pictures and video shared online of the city center, which Reuters could not immediately verify, showed military vehicles speeding through the streets, fighters shooting and local residents trying to douse fires.

Ali, a 23-year-old student who declined to give his surname, said he fled his apartment along with his family during the night after bullets struck their building. “We could not stay any longer and survive,” he added.

Libya has had little peace since the 2011 NATO-backed uprising that ousted Muammar Gaddafi and it split in 2014 between rival eastern and western factions, dragging in regional powers. Libyan oil output, a main prize for the warring groups, has repeatedly been shut off during the years of chaos.

An offensive in 2019 by eastern commander Khalifa Haftar, backed by the eastern-based parliament, collapsed in 2020 leading to a ceasefire and a U.N.-backed peace process.

The truce included setting up Dbeibah’s GNU to govern all of Libya and oversee national elections that were scheduled for last December but were abandoned amid disputes over the vote.

The parliament said Dbeibah’s mandate had expired and it appointed Bashagha to take over. Dbeibah said the parliament had no right to replace him and he would step down only after an election.

Bashagha attempted to enter Tripoli in May, leading to a shootout and his departure from the city.

Since then, however, a series of deals have brought realignments of some armed factions within the main coalitions facing off around Tripoli.

Haftar remains closely allied with the eastern-based parliament and after his 2019-20 offensive some Tripoli groups remain deeply opposed to any coalition in which he plays a role.

A GNU statement said the latest clashes in Tripoli were triggered by fighters aligned with Bashagha firing on a convoy in the capital while other pro-Bashagha units had massed outside the city. It accused Bashagha of backing out of talks to resolve the crisis.

Bashagha’s administration said in a statement that it had never rejected talks and that its own overtures had been rejected by Dbeibah. It did not directly respond to the assertion that it was linked to the clashes.

Both Dbeibah and Bashagha have attempted to court international opinion, vowing to maintain peace and accusing each other of using violence in pursuit of power.

Libya needs the American voting solution, just hire a vote machine company like what is used in US elections, and the vote can proceed. What outcome is desired when it can be all pre-programmed to shift with the desert winds to any direction and result?