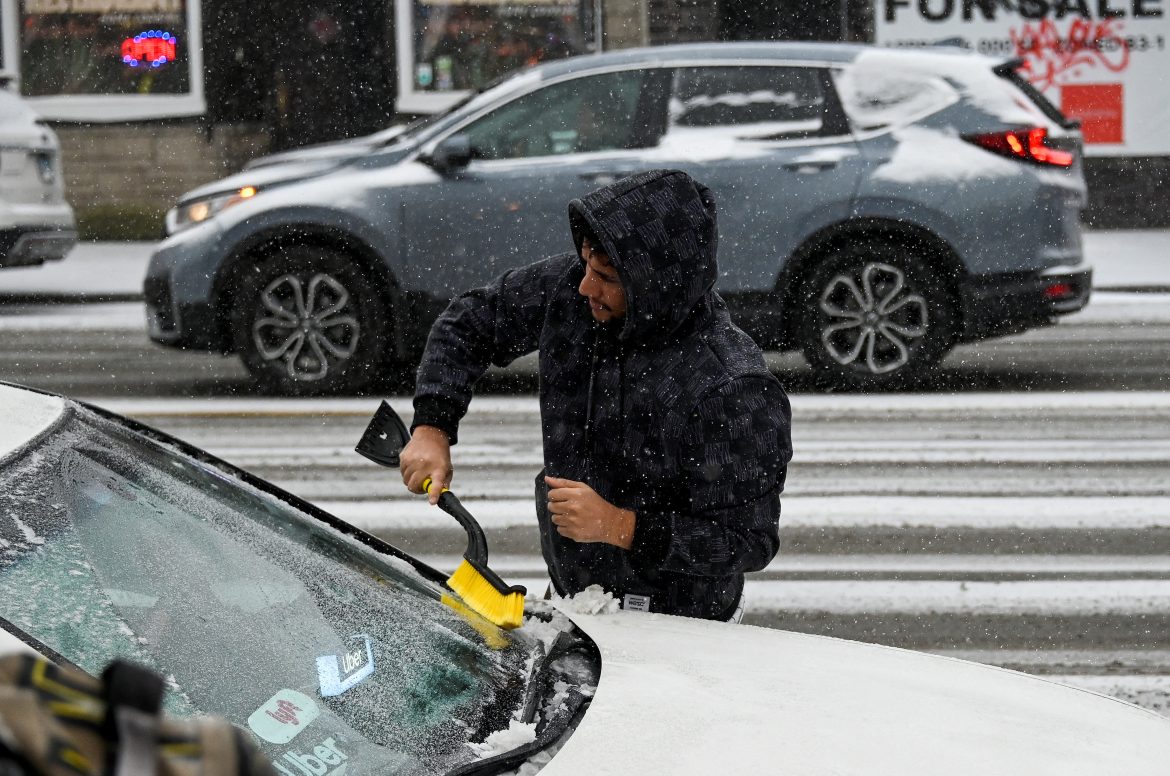 A deep freeze enveloped most of the United States early on Friday combined with a massive winter storm brewing in the Midwest to leave two-thirds of the nation under extreme weather alerts, confounding travel plans for millions of Americans.

Heading into the Christmas holiday weekend, the looming storm was forecast to develop into a “bomb cyclone,” unleashing heavy, blinding snow from the northern Plains and Great Lakes region to the upper Mississippi Valley and western New York.

Numbing cold intensified by high winds was expected to extend as far south as the U.S.-Mexico border.

Hard-freeze warnings were posted across the Gulf Coast states of Texas, Louisiana, Alabama and Florida, while significant icing was possible from a separate arctic blast hitting the Pacific Northwest.

By late Thursday, most of the Lower 48 states, from Washington state to Florida, were under wind-chill alerts, blizzard warnings, or other winter weather advisories affecting more than 200 million people, about 60% of the U.S. population, the National Weather Service (NWS) reported.

The NWS map of existing or impending wintry hazards, stretching from border to border and coast to coast, “depicts one of the greatest extents of winter weather warnings and advisories ever,” the agency said.

The bomb cyclone could unleash snowfalls of a half inch per hour driven by gale-force winds, cutting visibility to near zero, the weather service said.

Combined with the arctic cold, wind-chill factors as low as 40 degrees below zero Fahrenheit were forecast in the High Plains, the northern Rockies, and the Great Basin, the NWS said. Exposure to such conditions without adequate protection can cause frostbite within minutes.

Power outages were expected from high winds, heavy snow, and ice, as well as the strain of higher-than-usual energy demands.

One of the greatest immediate impacts, even before the storm fully took shape, was the upending of commercial air traffic during the busy holiday travel period.

More than 300,000 homes and businesses were without power on the U.S. East Coast and Texas on Friday as winter storms batter much of the country, according to data from.

More than a dozen other states east of the Mississippi River plus Oregon, Missouri, and Louisiana each have more than 10,000 customers facing outages due to winter storms.

Leading into the holiday weekend, the impending storm is expected to bring blizzard conditions to the Great Lakes region, heavy rains followed by a flash freeze on the East Coast, wind gusts of 60 miles per hour, and bitter cold as far south as the Mexican border.

The utility with the most outages was Georgia Power with over 80,000 customers without power. Georgia Power is a unit of U.S. energy company Southern Co.

Here are the major outages by utility:

More than 5,000 U.S. flights scheduled for Thursday and Friday were canceled, with two major airports in Chicago accounting for nearly 1,300 of the cancellations, according to flight-tracking service FlightAware.

One would-be holiday traveler, Brandon Mattis, 24, said Thursday his flight from New York City to Atlanta was canceled due to the coming storm, leaving him “flustered” at LaGuardia Airport in Queens.

Mattis said he searched for alternate routes and was even considering a 21-hour bus ride to Atlanta. “Anything we can do just to get there, we’re going to do,” he told Reuters.

The American Automobile Association had estimated that 112.7 million people planned to travel 50 miles or more from home between Dec. 23 and Jan. 2, up 3.6 million travelers over last year and closing in on pre-pandemic numbers.

But that number was likely to be diminished by air and road travel complicated by treacherous weather leading into the weekend.

Even U.S. President Biden urged Americans to think twice about venturing out after Thursday, calling the gathering storm “dangerous and threatening.”

“This is not like a snow day, when you were a kid, this is serious stuff,” he said in comments at the White House on Thursday.

The extreme cold also posed a particular hazard to livestock in ranching-intensive regions of the country. Tyson Foods Inc, the nation’s leading meat producer by sales, said it had scaled back operations to protect employees and animals.

The weather service said relief from the deep freeze was in sight for the northern Rockies and High Plains, where the arctic blast first materialized on Thursday. Temperatures in parts of those regions could rebound by 40 to 60 degrees over the weekend as the cold air mass creeps farther east.