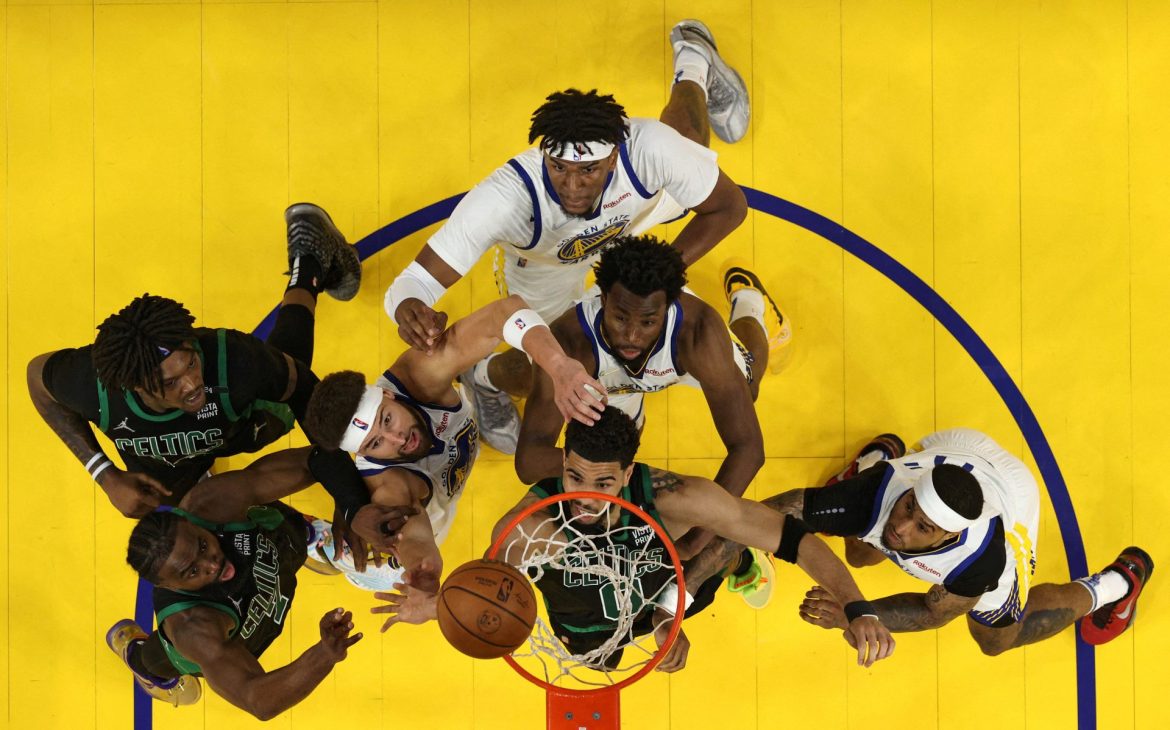 Stephen Curry didn’t make a 3-pointer in a postseason game for the first time in his career and the Golden State Warriors still beat the Boston Celtics to move within one victory of another championship.

Curry missed all 9 of his shots from behind the arc, ending a streak of 233 postseason and regular-season games in which the eight-time All-Star had made at least one 3-pointer over a stretch of 3 1/2 years.

Curry finished with 16 points, Andrew Wiggins led the way with 26, and Klay Thompson had 21 in Golden State’s 104-94 win in Game 5 Monday night. With the win, the Warriors are in a position to capture their fourth NBA championship in eight seasons Thursday night in Boston.

Despite his rare 0-fer, Curry plans to “keep shooting.”

“I’m not afraid to go 0-for-whatever because I’m going to keep shooting and taking shots that you normally feel like you can make,” said Curry, who is the NBA’s all-time 3-point scoring leader. “And I’ve responded well when I’ve had games like that from the 3-point line. I don’t think I’ve ever been happier after a 0-for-whatever type of night, just knowing the context of the game, the other ways you tried to impact the game and the fact that you had four guys step up in meaningful ways to help us win offensively.”

Curry scored 43 points in Game 4 and last had zero 3-pointers on Nov. 8, 2018. He expects to step it up when the Warriors try to close out the series at Boston’s TD Garden.

“Of course it bothers me as a shooter,” Curry said about the misses. “You want to impact the game that way. But thankfully that’s not the only thing that you do out there on the court. Obviously, track record says I shoot the ball better the next game. Looking forward to that bounce-back.”

His teammates expect it.

“Steph is the best to ever shoot it. And I’ll tell you what, everyone in the building, including the fans and those watching, believe the ball is going in when it leaves his fingertips,” Thompson said. “So we’re never stressed or worried about No. 30. He has done so much and elevated this franchise to a place where it was hard to even imagine that he has leeway, and he can have a bad night. I just know he’ll respond.”

While Curry struggled, Wiggins delivered a clutch performance in the biggest game of his career. The 27-year-old Wiggins, a No. 1 overall pick in the 2014 NBA draft, had only played in one postseason series before this year.

He came through when Golden State needed him most on Monday. Wiggins made 12 of 23 shots and grabbed 13 rebounds. He also spent most of the night defending Celtics star Jayson Tatum, who scored 27 points.

“It’s something I dreamed about for sure, being in the league, and this is the ultimate stage,” Wiggins said. “It doesn’t get bigger than this. I was out there being aggressive. It was a good game.”

Through the first five games, Wiggins is second on the team in scoring behind Curry at 18.4 points per game and first in rebounding at 9.4.

“I’m just trying to win. At the end of the day, no matter what it takes or whatever they need from me, I’m here to help them win,” Wiggins said. “These guys challenge you. Every day before the game, they’ll tell you, ‘We need you.’ ”

Warriors coach Steve Kerr said the team’s acquisition of Wiggins in 2020 was the key to returning to the Finals.

Wiggins punctuated the latest victory over Boston with a ferocious dunk late in the fourth quarter, bringing smiles to his teammates’ faces.

“For what Andrew did, we don’t get more excited than when Wiggs dunks on somebody and mean mugs them,” Thompson said. “That really uplifts the whole team and the Bay Area.”