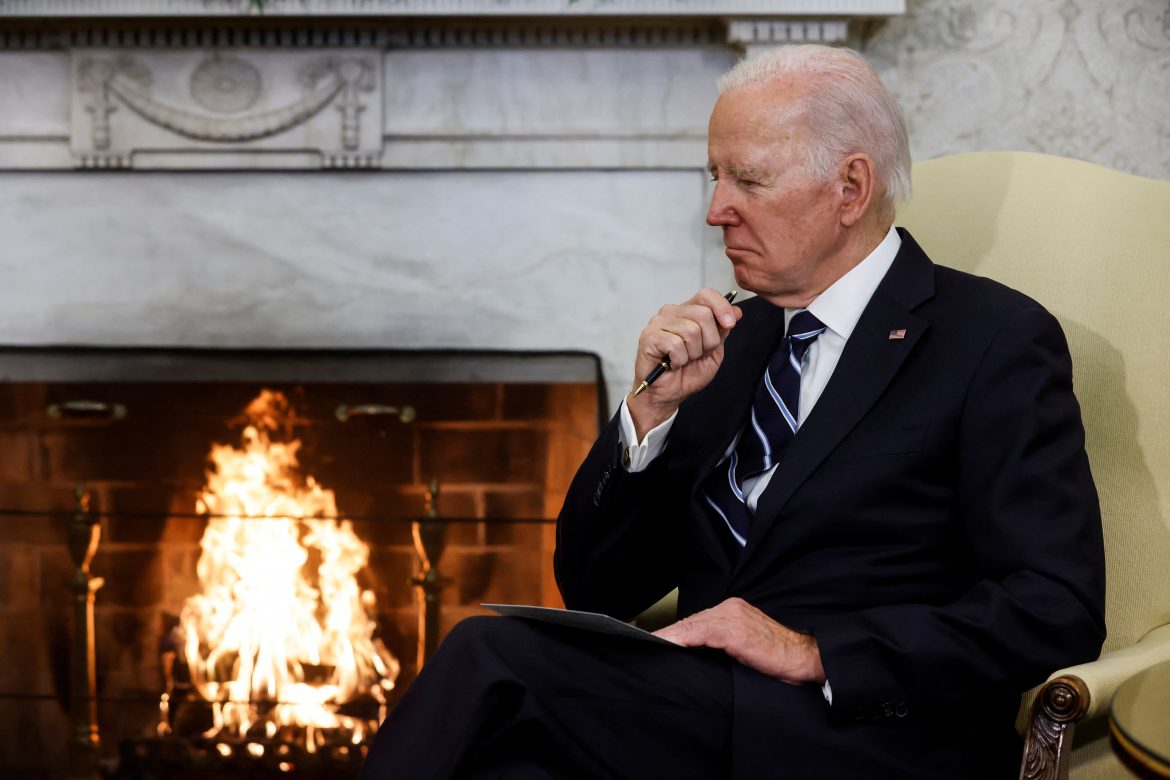 A nonpartisan group of former public servants has filed a complaint with the Office of Government Ethics alleging that President Joe Biden, through his work with attorneys on the matter of classified documents found in his possession, could be using taxpayer dollars for personal benefit.

Tuesday, Protect the People’s Trust (PPT), a watchdog whose stated primary aim is fostering “one set of rules that our leaders must live by no matter what party affiliation or ideological bent,” sent a letter officially outlining its complaints to the ethics agency.

Specifically, PPT argues that Biden’s document scandal impacts him most directly as a private citizen but that he is receiving legal advice from attorneys who are operating in their capacity as counselors for the nation’s chief executive.

“[We] believe taxpayer resources may have been inappropriately used by senior White House lawyers, including Special Counsel to the President Richard Sauber, to personally benefit Joe Biden,” the letter reads. “We further believe that the apparent representation of Mr. Biden by the White House Counsel’s Office in this matter creates an untenable conflict of interest for that office. The result, intended or not, could be to reduce transparency into the mishandling of state secrets and foreclose disclosure of communications between White House Counsel staff while acting on behalf of Joe Biden in his capacity as a citizen facing the prospect of criminal prosecution.”

It could be an ethical gray area for Biden. While the documents relate to his time as vice president, the investigation is being carried out by his Justice Department.

Biden would face charges, assuming charges were ever filed, in connection to actions taken after leaving the vice presidency, but he must also avoid legal risk in his current capacity as president.

There is no doubt that Biden is working directly with and closely following the instruction of attorneys, the question will be what advice is he receiving from whom in regards to which elements of the investigation?

Essentially, this is the request being made by PPT.

“The American public will not tolerate a two-tiered system of justice — with well-connected insiders subject to a lower standard of scrutiny than the normal citizen,” PPT director Michael Chamberlain said in a statement.

President Biden promised the most ethical and transparent administration in history. If the White House compounded a scandal involving possible mishandling of classified documents by improperly using taxpayer resources for his personal benefit and putting White House attorneys in positions that created conflicts of interest, we could be witnessing a serious betrayal of the public’s already-plummeting trust.

As previously reported on FISM, both Democrats and Republicans agree that Biden’s counsel will recommend the administration stay quiet. This is common enough legal advice, but it will complicate things for the president in at least two ways.

First, keeping quiet is the opposite of the transparency he promised the American people (similar to a promise former President Barack Obama and then Vice President Biden made in 2008).

Republicans and now watchdogs have lept on the chance to call Biden and his subordinates out for failing to honor that promise.

Second, even in a White House press room stacked by the administration to best favor the president, Biden will face ever-louder calls for answers from journalists. The American media, flawed though it is, is still home to journalists trained to give chase when public officials attempt to run from scrutiny.

White House Press Secretary Karine Jean-Pierre experienced the first wave of this reality Tuesday, when multiple reporters grilled her over having claimed the search for classified documents was over last Friday, one day before additional documents were found.

“Is it safe to assume now that all the documents that had been recovered, all the official records, all the classified documents are back in the custody of the National Archives, or are more searches underway to find out if there’s anything else there?” one reporter asked Jean-Pierre during a Tuesday briefing.

There are few statements more likely to get a spirited response, even from a fractured U.S. media, than “no comment” in politics.

Reporters continued to press Jean-Pierre for answers on why she had been so resolute, yet so inaccurate, days earlier.

“So did you not know on Friday that those documents had been found when you were at the podium, or are you being directed by someone to not be forthcoming on this?” a reporter asked.

The press secretary responded, “I have been forthcoming from this podium. What I said … was what the statement at the time was — what we all had. You all had the statement, and I was repeating what the counsel was sharing at that time.”

But therein, for Jean-Pierre now and likely the president later, is the problem. When the order of the day is silence or statements prepared by counsel, how does one engender trust?

“Are you upset that you came out to this podium on Friday with incomplete and inaccurate information?” a reporter asked. “And are you concerned that it affects your credibility up here?”

“Well, what I’m concerned about is making sure that we do not politically interfere in the Department of Justice, that we continue to be consistent over the last two years,” Jean-Pierre replied. “And that is [to] continue to refer you all when it comes to an ongoing process.”

While Fox News is decidedly right-leaning, one piece of commentary from that network serves as a useful preview of what is likely to come as the White House, at the advice of counsel, obfuscates more frequently.

In an appearance on “The Story,” Fox contributor Joe Concha, lashed out at Jean-Pierre.

Karine Jean-Pierre has shown that she is not qualified for this job at this level. We’ve seen that now over the last couple of months, because she keeps saying over and over again — as if she’s almost programmed, like she has no ability to think extemporaneously — that the president ‘takes these documents very seriously.’ In one press conference, she’s literally said that line 17 times. And at the same time, she talks about how transparent the administration has been with the public — while not answering questions.

The media isn’t the only entity souring on the notion of Biden as a master ethicist.

Tuesday, Walter Shaub, previously ethics chief under Obama, accused Biden of having acted with “neglect” in his handling of classified documents.

During a lengthy interview with Fox News, Shaub made certain to apply the “Remind them Trump is worse” strategy that has become the go-to preamble of all Democrats addressing Biden’s issue, but he also called to question Biden’s commitment to data security.

“It’s nothing like Trump’s deliberate refusal to return classified records demanded by the National Archives, but Biden’s own retention of classified records reflects an inexcusable neglect of the most basic security protocols,” Shaub said.

He added, “The fact that the White House didn’t mention that records were found in more than one location when first asked about them was a breach of trust with the public and a self-inflicted wound.”