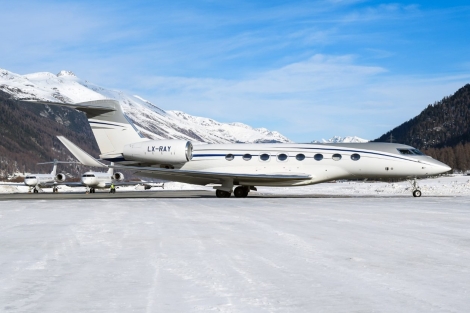 It remains to be seen if it will ultimately have any impact on the war in Ukraine, but the Department of Justice Monday again promised to confiscate pieces of opulent property from a Russian oligarch.

The DOJ has unsealed a document that reveals it has obtained a warrant that will allow it – were it ever to find the chance – to confiscate a pair of ultra-luxurious jets that belong to Roman Abramovich, who is perhaps better known to Western readers as the former owner of the Chelsea Football Club or as one of the people who suffered what appeared to be the side effects of poisoning following a peace negotiation in Kyiv last March.

“In response to Russia’s invasion of Ukraine, the U.S. Department of Commerce’s Bureau of Industry and Security (BIS) issued various sanctions against Russia that impose export controls and license requirements to protect U.S. national security and foreign policy interests,” the affidavit used to secure the warrant reads. “These Russia sanctions include expanded prohibitions on the export, reexport, or in-country transfer of U.S.-manufactured aircraft and aircraft parts and components to or within Russia without a BIS license, and eliminate the availability of any license exception for aircraft owned or controlled, or under charter or lease, by Russia or a Russian national.”

The aircraft in question, a Boeing 787-8 aircraft and a Gulfstream G650ER, are worth $360 million and $60 million, respectively. DOJ alleges both were “reexported” to Russia without a proper BIS license.

According to the Justice Department, the Boeing is currently located in the United Arab Emirates while the Gulfstream is still in Russia.

On the surface, it might seem fantastical to think the U.S. will be able to seize either jet and beyond comprehension that DOJ will bring in both. While the United States might be able to apply diplomatic pressure to the Emirates, the Gulfstream is certainly out of reach.

If anything, the announcement of the pending seizure might at first blush seem little more than an inconvenience for Abramovich as he would have to limit his travels aboard those jets to only countries unlikely to acquiesce to U.S. demands or fly on a different jet.

However, the United States has one major trump card.

According to Damian Williams, U.S. Attorney for the Southern District of New York, the Justice Department, through BIS, is seeking a judgment against Abramovich in an amount double the combined worth of the two jets. Even for a billionaire, such a price would be steep, and Abramovich or one of his companies would have to pay the fine or risk losing access to the American market.

As of this writing, Abramovich has not commented on this development.

The DOJ’s efforts to seize the property of Russian oligarchs are part of a task force known as KleptoCapture. As previously reported on FISM, the idea behind the program is for the U.S. and its allies to attack the assets of the wealthy ruling class of Russia, thereby shaking the support Russian President Vladimir Putin enjoys.

While there have been examples of seizures, most notably a series of yachts, data has not yet emerged to qualify the effectiveness of the strategy.