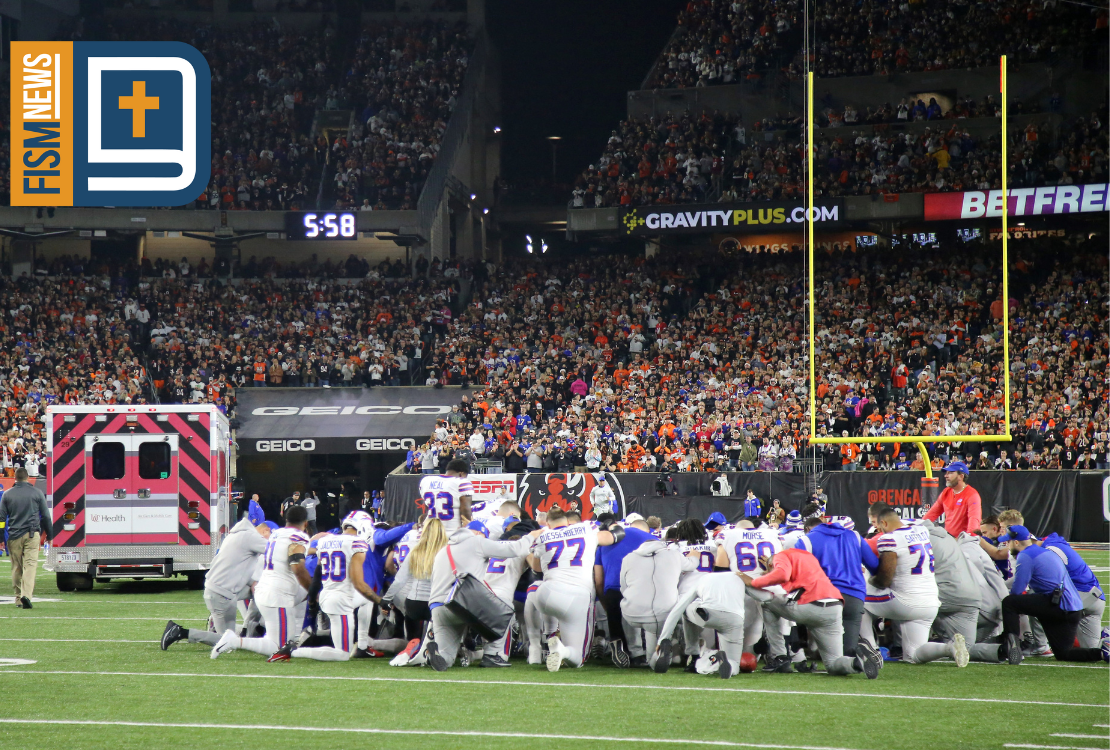 Hamlin remained in critical condition at a hospital in Cincinnati after his heart stopped and medical personnel had to resuscitate him on the field after making a tackle.

His uncle, Dorrian Glenn, told CNN in a televised interview outside the hospital Tuesday that Hamlin needed to have his heart re-started again after he arrived at the hospital.

“They were resuscitating him on the field before they brought him in the hospital and then resuscitated him a second time when he got to the hospital,” Glenn told CNN. “I just want to show my gratitude for the medical staff that were on hand because if not for them, my nephew probably wouldn’t even be here.”

The NFL suspended the Bills-Bengals game in the first quarter and NFL Commissioner said there were no plans to resume it this week. The league plans to play the Week 18 schedule though it’s unknown whether the Bills will take on the New England Patriots.

An outpouring of support for the 24-year-old Hamlin came from sports fans and people across the country. Each NFL team changed its Twitter avatar to Hamlin’s No. 3 jersey with a simple message: “Pray for Damar.”

Orlovsky did just that on ESPN’s NFL Live program.

“God, we come to you in these moments that we don’t understand, that are hard, because we believe that you’re God, and coming to you and praying to you has impact,” Orlovsky said.

We’re sad, we’re angry, and we want answers, but some things are unanswerable. We just want to pray, truly come to you and pray for strength for Damar, for healing for Damar, for comfort for Damar, to be with his family, to give them peace. If we didn’t believe that prayer didn’t (sic) work, we wouldn’t ask this of you, God. I believe in prayer, we believe in prayer. We lift up Damar Hamlin’s name in your name. Amen.

This is awesome, and I think, unbelievably courageous of Dan Orlovsky to openly pray for Damar Hamlin on ESPN. What a moment. THIS is the viral content we need.pic.twitter.com/R8SmKWQInN

Orlovsky’s colleagues on set also bowed their heads with him in prayer.

The 39-year-old Orlovsky played quarterback for 10 seasons in the NFL with Detroit, Houston, Indianapolis, and Tampa Bay. He started seven games during the Lions’ 0-16 season in 2008.

“As long as I worked as hard as I could and I was doing everything the right way, I knew everything would work out in my career, and if it didn’t then I was at peace knowing God had something bigger and better for me,” Orlovsky said on Faith On The Field Show.

Orlovsky pointed to Matthew 18:20 in a Twitter post about him praying on ESPN’s show. The verse says: “For where two or three gather in my name, there am I with them.”

Hamlin’s teammates and players around the league also offered prayers. Bills and Bengals fans gathered at the hospital immediately following the postponement of the game and many returned on Tuesday for a prayer vigil.

Glenn told CNN there were some encouraging signs, such as doctors lowering the level of oxygen Hamlin needs from 100% to 50%.

“He’s still sedated right now,” Glenn told CNN. “They just want him to have a better chance of recovering better. So, they feel that if he’s sedated, his body can heal a lot faster than if he was woke and possibly cause other complications.”

Several NFL teams canceled media availability on Tuesday. The Titans, Jaguars, and Chiefs practiced ahead of their games on Saturday.

Tennessee Titans linebacker Rashad Weaver, who played with Hamlin at the University of Pittsburgh, sobbed at his locker for a few minutes before speaking to reporters.

“We didn’t just play together, we were friends, teammates. I mean I’ve known him now for seven years,” Weaver said. “We’re just always interacting, telling each other to keep going.”

What an encouragement Orlovsky’s obedience to God is here. He clearly knew that praying to God live on ESPN could be seen as not “the right thing to do” in the eyes of many at the Disney-owned sports broadcast giant that has grown increasingly loud in its support of leftist ideologies.

But he did what he knew was right in the eyes of God, not man.

The lesson we can all take away is this: boldly proclaim the power and majesty of God Almighty, and pray for His help and guidance, no matter what others may think.

Let us therefore come boldly to the throne of grace, that we may obtain mercy and find grace to help in time of need. – Hebrews 4:16