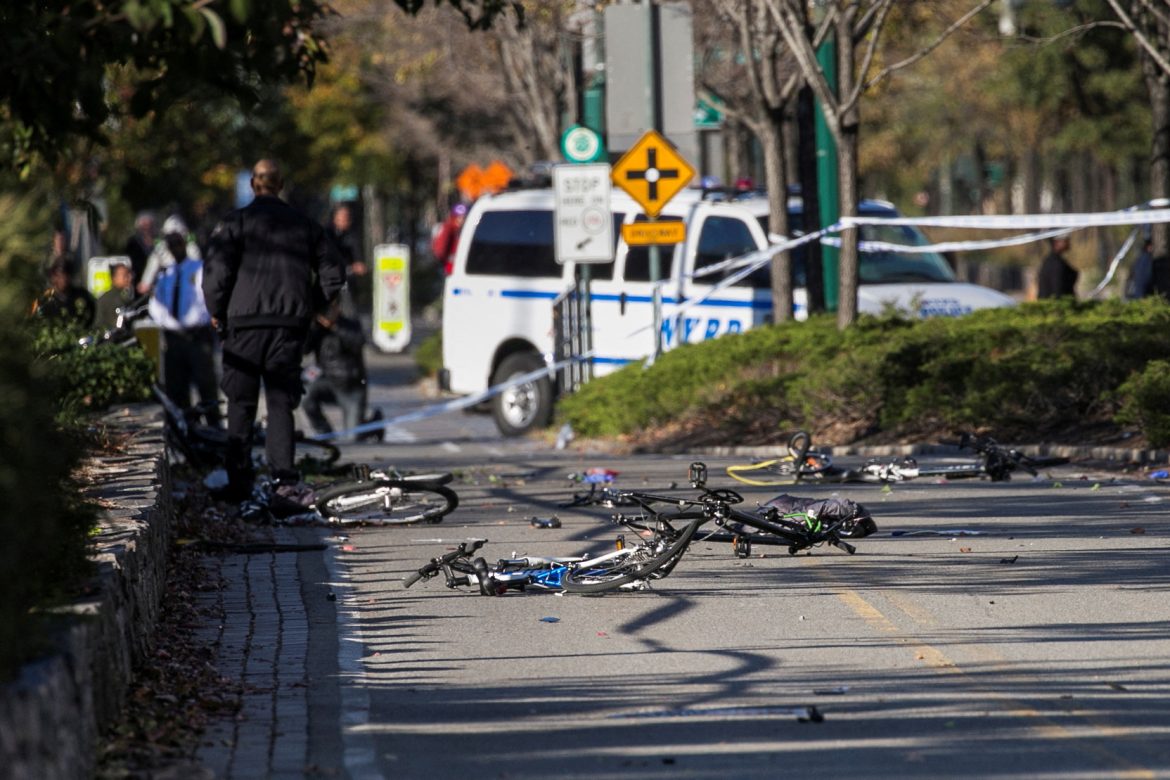 A man accused of using a truck to kill eight people on a Manhattan bike path on Halloween in 2017 is an Islamic State sympathizer who carried out the attack to satisfy the militant group, federal prosecutors said on Monday.

Sayfullo Saipov, 34, left behind “a scene of destruction and horror” when he employed a rental truck as a weapon and mowed down people on Oct. 31, 2017, Assistant U.S. Attorney Alexander Li told a jury during 30 minutes of opening statements.

Prosecutors allege Saipov began researching the Islamic State online in 2014 and was in possession of serrated knives the day of the attack.

“Right after the attack, he proudly declared why he did it. He did it for ISIS, the brutal terrorist organization,” Li said. “It was a scene of devastation and horror all caused by the defendant for ISIS.”

Saipov has pleaded not guilty to a 28-count indictment that charges him with murder and for providing material support to Islamic State, a militant group in the Middle East that the United States has designated a terrorist organization.

He appeared in court wearing a green jacket and gray pants. A black beard hung past his face mask. An Uzbek national, Saipov was provided a headset to listen to an interpreter.

The defense team is set to deliver opening remarks later on Monday after the court returns from lunch.

The trial is expected to last about three months, Judge Vernon Broderick of the U.S. District Court in Manhattan said.

The U.S. Department of Justice told the judge in September that it intends to seek the death penalty for Saipov. It is the first federal death penalty trial under U.S. President Joe Biden, a Democrat who took office in January 2021. If convicted, Saipov could also be sentenced to life in prison without parole.

According to prosecutors, Saipov chose Halloween because he thought more people would be on the streets, and also planned to strike the Brooklyn Bridge.

Mangled bicycles, injured bodies, and casualties of the attack covered the scene of the violence, Li said. A school bus was left with a “truck-sized hole,” he added.

Those killed included five Argentinian tourists and one Belgian tourist. More than a dozen other people were severely injured.

Prosecutors have told the court they intend to show the 12-member jury photographs and videos of the attack.

Saipov has been jailed since his arrest.

The decision to pursue the death penalty came after U.S. Attorney General Merrick Garland ordered a moratorium on federal executions in July 2021 while the Justice Department reviews its use of the punishment.

Federal executions resumed in 2020 under then-U.S. President Donald Trump, a Republican, after a 17-year hiatus, with 13 carried out before Trump left office in 2021.

The jury will not consider punishment during the first phase of the trial. If they find Saipov guilty of any capital crimes they would then be required to weigh whether to sentence him to death.