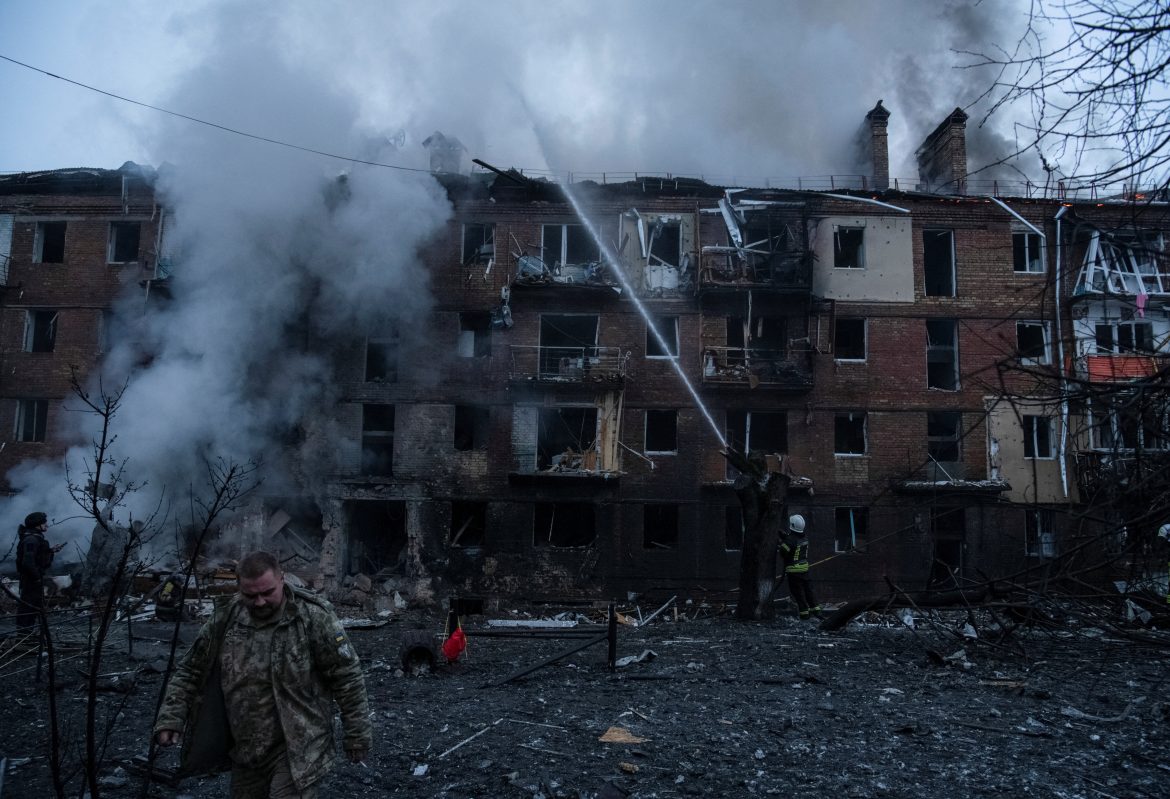 Millions of Ukrainians were still without heat or power on Friday after the most devastating Russian air strikes on its energy grid so far, with residents warned to brace for further attacks and stock up on water, food, and warm clothing.

Moscow says the attacks on Ukraine‘s basic infrastructure are militarily legitimate, and that Kyiv can end the suffering of its people if it yields to Russian demands. Ukraine says attacks intended to cause civilian misery are a war crime.

“Together we endured nine months of full-scale war and Russia has not found a way to break us, and will not find one,” President Volodymyr Zelenskyy said in a video address overnight.

Russia has been striking the Ukrainian energy network far from the frontlines of the nine-month-old war with barrages of long-range missiles around once a week since early October.

Attacks on Wednesday caused the worst damage so far, leaving millions of people with no light, water, or heat even as temperatures around the country have fallen below zero.

The three nuclear power stations on Ukrainian-held territory were now working, it said, two days after the attacks had forced Ukraine to shut them all down for the first time in 40 years, creating what Kyiv had called a risk of atomic catastrophe.

Zelenskyy also accused Russia of incessantly shelling Kherson, the southern Ukrainian city that it abandoned earlier this month. Seven people were killed and 21 wounded in a Russian attack on Thursday, local authorities said.

Viewed from space, Ukraine has become a dark patch on the globe at night.

Russia insists it does not target civilians in the “special military operation” it launched in late February. International human rights officials say that is difficult to reconcile with the countrywide attacks on civil infrastructure.

“Millions are being plunged into extreme hardship and appalling conditions of life by these strikes,” U.N. human rights chief Volker Turk said in a statement.

“Taken as a whole, this raises serious problems under international humanitarian law, which requires a concrete and direct military advantage for each object attacked.”

Nigel Povoas, the lead prosecutor with a team of international experts assisting Ukrainian war crimes investigators, said the strikes were “focused on eliminating infrastructure crucial to means of civilian survival such as heat, water, power, and medical facilities”.

“Each wave of attacks tends to reinforce the strength of the allegations of grave criminality being leveled against the Kremlin. That these attacks have very little, if anything, to do with military objectives,” he told Reuters.

“Rather, that they reflect a criminal intent to inflict widespread terror, large-scale humanitarian suffering and death, particularly on the vulnerable, so as to coerce the Ukrainian people into submission.”

Russian President Vladimir Putin, who ordered the invasion and has called up hundreds of thousands of reservists in Russia’s first mobilization since World War Two, held a televised meeting with mothers of soldiers on Friday, praising them for the sacrifices of their sons.

“I would like you to know that, that I personally, and the whole leadership of the country – we share your pain,” Putin said in the pre-recorded meeting, sitting with the mothers around a table with tea, cakes, and bowls of fresh berries.

British Foreign Minister James Cleverly visited Ukraine and pledged millions of pounds in further support, his office said on Friday. Cleverly, who met Zelenskiy on the trip, condemned Russia for its “brutal attacks” on civilians, hospitals, and energy infrastructure.

More than 15,000 people have gone missing during the war, an official in the Kyiv office of the Hague-based International Commission on Missing Persons (ICMP) said.

The ICMP’s program director for Europe, Matthew Holliday, said it was unclear how many people had been forcibly transferred, were being held in detention in Russia, were alive and separated from family members, or had died and been buried in makeshift graves.

In Kherson, recaptured from Russian forces this month, Anna Voskoboinik, a one-legged woman in a wheelchair, was clutching aid she received at a crowded humanitarian distribution point. She has been searching for three months for her son, Oleksii, 38, who vanished after being arrested at a Russian checkpoint.

“Where is he now? I don’t know. I would go to the end of the world to find out. He’s my only son. He was always nearby. Now…” she said.

Russia says it launched its operation in Ukraine to protect Russian speakers in what Putin has called an artificial country carved from Russian territory. Kyiv calls it an unprovoked war of aggression, reflecting what it sees as malice towards Ukrainians dating back to Soviet and imperial days.

This week, Ukrainians will observe the 90th anniversary of the Holodomor, a man-made famine in which millions of Ukrainians starved to death while the Soviet Union was exporting food.

Germany’s Bundestag parliament is expected to vote overwhelmingly to recognize it as a genocide, following similar moves this week by Romania, Moldova, and Ireland. Ukraine‘s Foreign Minister Dmytro Kuleba praised the move, thanking Germany “for honoring the Ukrainian people”.

In November 1932, Soviet leader Joseph Stalin dispatched police to seize all grain and livestock from newly collectivized Ukrainian farms, including the seed needed to plant the next crop. Yale University historian Timothy Snyder described the death by starvation of millions of Ukrainians that followed as “clearly premeditated mass murder”.

Report: Almost 60% of COVID-19 deaths are in vaccinated individuals