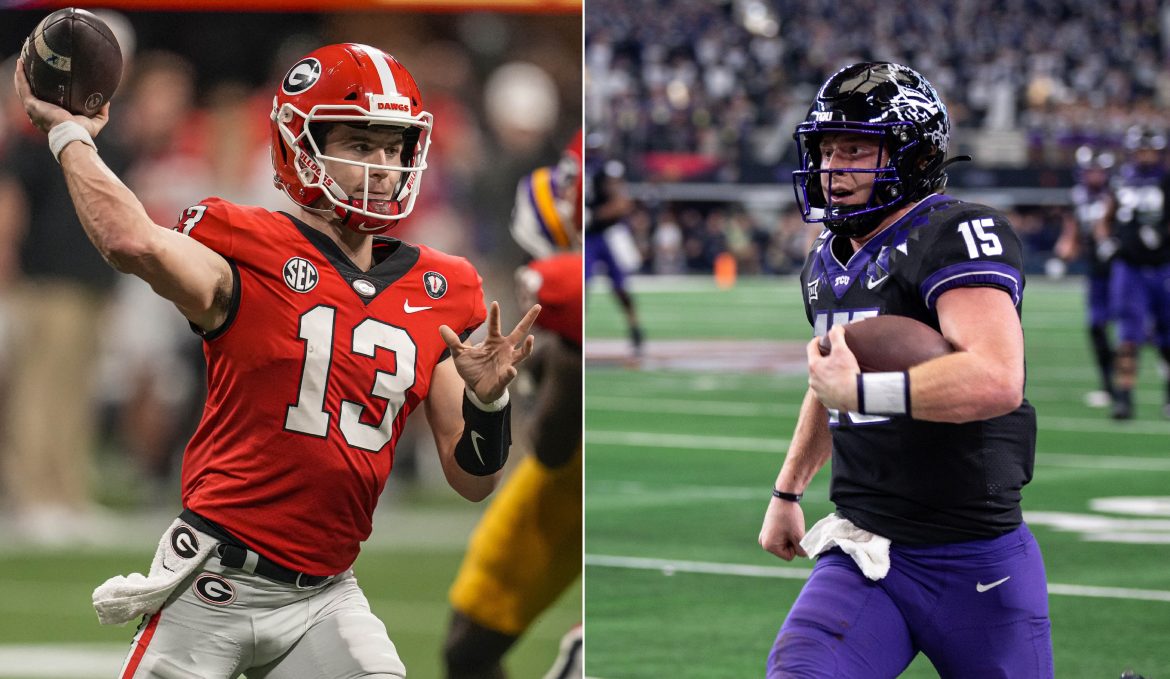 The finale of the 2022 NCAA football season kicks off tonight, though the matchup is unlike what virtually anyone would have predicted at the start of the season.

Though experts long favored the Georgia Bulldogs (14-0) to contend for a second consecutive title, one would be hard-pressed to find any learned observer who, with a straight face, predicted the TCU Horned Frogs (13-1) to be the other half of the championship.

While Georgia was busy winning a national championship in the 2021 season, TCU was limping to a 5-7 record in what turned out to be legendary coach Gary Patterson’s final season.

New coach Sonny Dykes was viewed as a strong replacement for Patterson, but few could have predicted the success that was to come. He had previously coached good-but-not-great teams at Louisiana Tech, Cal, and SMU and had eclipsed nine wins just once (SMU in 2019) in 11 seasons.

Additionally, TCU quarterback Max Duggan didn’t even start the season under center. Dykes named Duggan the backup behind Chandler Morris in the first game of the season, despite the fact that Duggan had started 29 games in his first three seasons at TCU.  After a Morris injury, Duggan was given charge of the offense and never looked back, putting together a stellar season that earned him second-place honors in this year’s Heisman Trophy voting.

And yet, here the Horned Frogs are. Fresh off of an upset win over Michigan in the College Football Playoff semifinal, TCU now faces the daunting challenge of a Georgia team that is the prohibitive favorite.

“You’ve got to play hard, keep your head down, keep grinding, do the little things right to give yourself a chance to play well every week,” 247Sports quoted Dykes as saying. “We come into this game with a lot of motivation, obviously. It’s been a long season. We’ve exceeded expectations, at least externally. And so anytime you do that there’s always a little bit of extra motivation.”

For Georgia, which narrowly escaped a high-powered Ohio State in a 42-41 shootout in the semifinal, a win over TCU is not being taken as a guarantee.

“[A] lot of people look at it as it’s all about what your kids were rated when they came in,” Smart, speaking in a teleconference, said in reference to the prospects TCU attracts compared to Georgia. “Coach Dykes inherited a lot of those players and got some through the portal and things. But you got what you got. And what you do with what you have is what makes you a coach. And he’s done a tremendous job with the players that he has and has inherited. I feel like we’ve done the same with the ones we’ve gone out and recruited.”

Smart added he never gets why “everybody gets into all those ratings and all those things. Over and over again it’s about the chemistry of a team and I would venture to say that these two teams probably have some of the best chemistry across the country.”

Both teams are also unashamed of Christ. Last week, Smart and his team met for prayer and discussion in the wake of NFL player Damar Hamlin collapsing on the field.

Smart has been open about being a practicing Christian since his hiring at Georgia in 2015.

The religious connection for TCU is far more evident given that the acronym stands for Texas Christian University and that the university is affiliated with the Christian Church (Disciples of Christ).

TCU has the chance to become the first Christian university to win a national championship in the modern era of college football.

Notre Dame was the last Christian school to achieve such a feat, but that was in 1988 when titles were still awarded by popular vote.

One has to trace much farther back in history to find a protestant-based school winning a national title. That was the Horned Frogs in 1938.

Kickoff for the FBS National Championship Game is scheduled for 7:30 p.m. ET. The game will be broadcast on the ESPN family of networks. ESPN will carry the main broadcast with about a dozen specialty broadcasts slated for ESPN’s various television and radio properties.