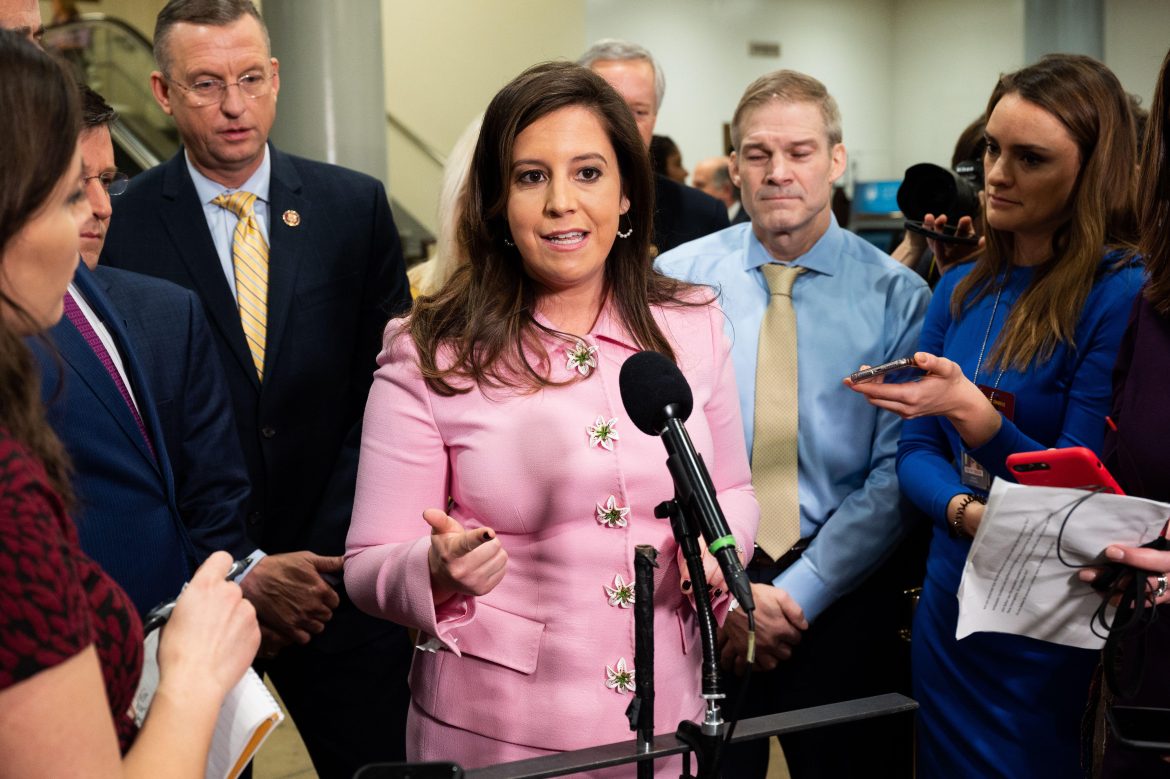 Battlelines have been drawn ahead of this Thursday’s first primetime hearing by the Jan. 6 Committee investigating the 2020 Capitol breach, with prominent Republicans ready to go all-out with a counterprogramming campaign.

House Republican Conference Chairwoman Elise Stefanik (R-N.Y.) told Breitbart Saturday that the GOP plans to “set the record straight” on the committee’s “vile” witch hunt she said centers around punishing the Democrats’ political opponents. The counterprogramming will include several ads and televised interviews.

“We’re working very closely with President Trump and his team, with Leader Kevin McCarthy, with Jim Jordan, and really all of the House Republicans will be pushing back in a rapid response fashion,” Stefanik said.

“You will see us all over the airwaves. We will be setting the record straight. We will be telling the truth to the American people sharing the facts and also really pointing out how unprecedented and unconstitutional and illegitimate this committee is,” she continued.

Stefanik added that GOP members have lined up several media bookings and confidently predicted that members are “going to shine in this moment.”

The Jan. 6 investigation reclaimed the national spotlight again with Friday’s highly-publicized arrest of former Trump adviser Peter Navarro on criminal contempt charges for refusing to testify before the committee. That same day, the Justice Dept. dropped similar charges against former Trump officials Mark Meadows and Dan Scavino who were charged with failing to cooperate with the committee’s investigation.

The committee has reportedly sought the primetime slot “to reach a broad segment of Americans and relay the extent to which democracy itself was at stake that day,” according to The Hill.

“The committee will present previously unseen material documenting January 6th, receive witness testimony, preview additional hearings, and provide the American people a summary of its findings about the coordinated, multi-step effort to overturn the results of the 2020 presidential election and prevent the transfer of power,” members said in a statement on Thursday.

Stefanik said that Americans can expect to see Republicans fighting back against the Democrats’ “vicious” and repeated attempts to attack Trump and his supporters, including two “sham” impeachment proceedings against the former president.

According to Stefanik, the GOP’s counterprogramming effort will include “talking about issues that matter to the American people,” and “prosecuting the case against how much Speaker Pelosi, Democrats, and Liz Cheney have failed this country, and they’ve failed to focus on the issue.”

“If they want to talk about securing the Capitol, which they refused to, they have failed to do that job,” she continued, adding that they have instead continued to “shred constitutional precedents.”

The chairwoman further remarked that Democrats are hoping their primetime hearing will draw attention away from their own party’s failures, including record-high inflation, soaring gas prices, and the baby formula crisis.

“[Democrats] are doubling down, looking for any desperate attempt to try to change the narrative. But look, the American people are smart. They see through this, they want a Congress that’s focused on the issues that matter to them,” she said.