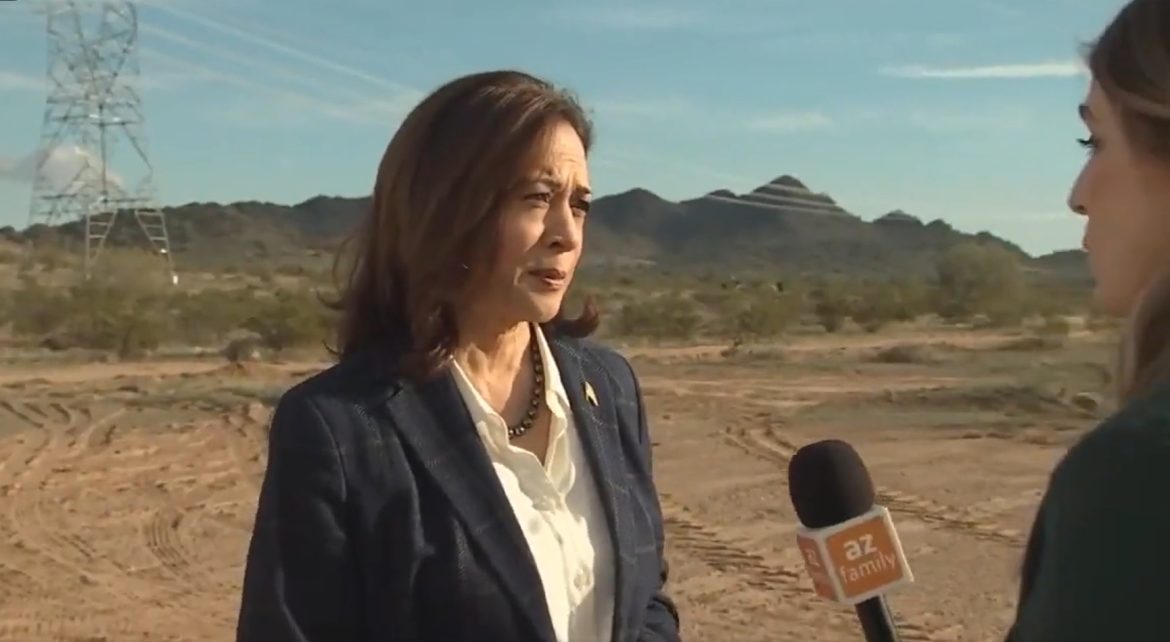 Vice President Kamala Harris visited Arizona on Thursday but refused to visit the southern border despite being chiefly responsible for investigating the causes behind the overwhelming illegal immigration crisis.

“I am here to talk about what we are doing around bringing down the cost to American families and creating jobs,” Harris told Arizona news station KPHO when pressed on a border visit.

She added that the border “is one of our highest priorities” before putting the blame on a failure to act from Congress as the reason the crisis was ongoing.

“I visited the border. I will not on this trip, but I have, and I will again,” Harris stated.

Border Czar Kamala Harris confirmed she wouldn't visit the border while she was in Arizona today (but reminded us she stopped by 18+ months ago). pic.twitter.com/72MkMTeIdf

At the time, Harris was in Tonopah, Arizona to speak at a groundbreaking event for a new transmission line for a clean energy project. The event was meant to highlight the Biden administration’s commitment to clean energy.

However, it demonstrated tone-deafness to communities less than 100 miles away that have been ravaged by unchecked immigration.

In fact, the Thursday statement is reminiscent of the complacent attitude that has characterized Harris’s attitude toward the border shortly after being tasked by President Joe Biden to oversee immigration concerns. When asked then about visiting the border, Harris said, “Not today, (laughter), but I have before, and I’m sure I will again.”

That was in March of 2021. It took the vice president three months before a border visit finally appeared on her schedule. That was in June 2021, and it was the last time that Harris visited the U.S.-Mexico border.

Still, the lack of direct involvement in the border has not prevented Harris from declaring that the border is secure, despite multiple Texas counties stating the border crisis should be counted as an invasion.

Migrant encounters at the border reportedly topped 250,000 in December for the first time in U.S. history. One Customs and Border Patrol (CBP) agent said there were nearly 600,000 known ‘gotaways’ – the term used for migrants who have evaded capture – during Fiscal Year 2022.

The crisis has become so apparent without any sign of slowing that even Democratic party members have begun to criticize the Federal government for inaction.

“It is a great story and we appreciate that, but it is a lost opportunity to visit the border and bring attention to the security issues we’re facing,” said John Giles, the Democratic mayor of Mesa, Arizona.

Giles said his city has recovered 800,000 Fentanyl tablets in the last two months as migrants surged across the border.

Mesa is only one hour from Tonapah by the fastest route between the cities.

On Jan. 17 at a City Hall press meeting, New York City Mayor Eric Adams called for the appointment of a “national czar” that works to prevent any one U.S. city from being overrun with asylum seekers.

This follows Adams’ visit to El Paso where he declared that the Biden administration needs “do to its job.”

Harris has previously visited Texas for a campaign stop while also avoiding the border.