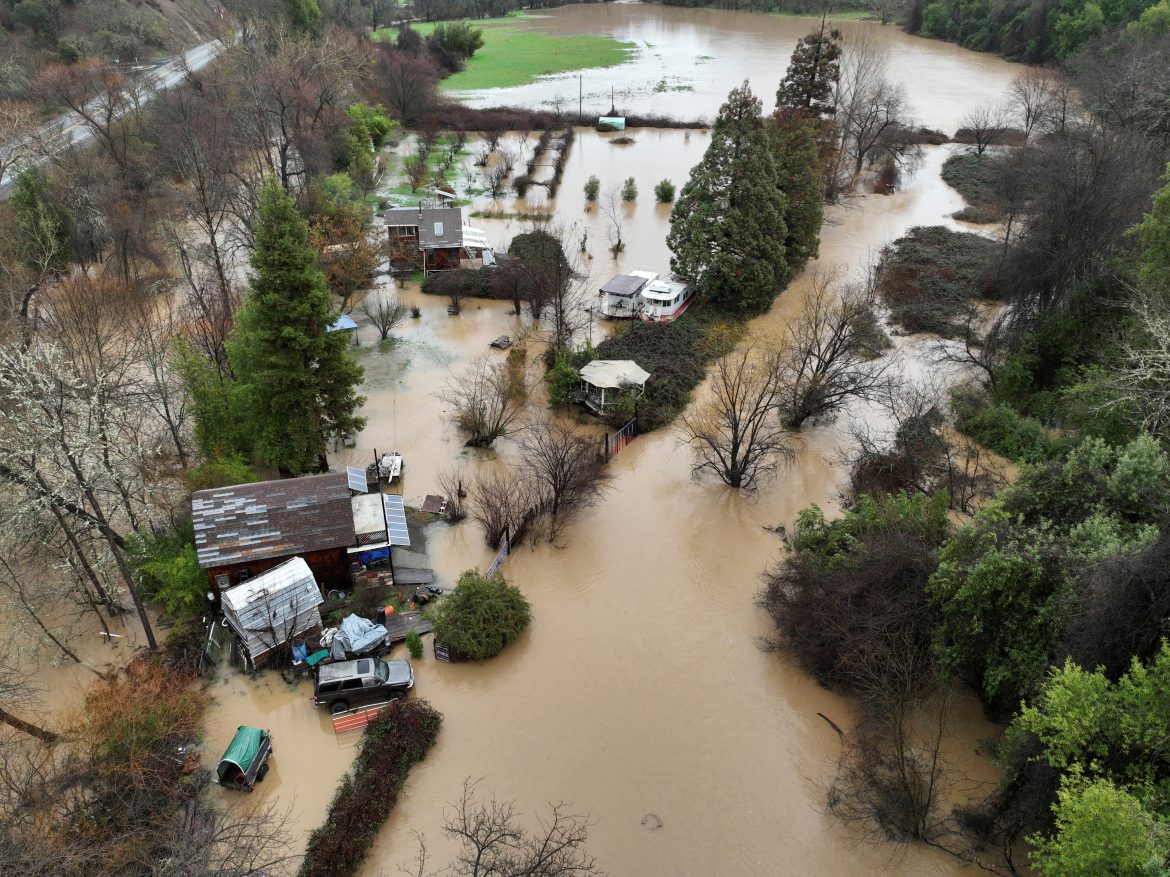 More than 60,000 homes and businesses were still without power in California early Friday after a massive Pacific storm unleashed high winds, torrential rains, and heavy snow across the state.

At least two fatalities have been reported since Wednesday due to the storm, which knocked out power to tens of thousands of homes and disrupted road travel with flash floods, rock slides, and toppled trees.

Last night, Pacific Gas and Electric Co (PG&E) said it had restored power to more than 400,000 customers in the last 30 hours. Around 55,000 customers were still without power in PG&E’s territory on Friday morning, according to PowerOutage.us.

PG&E is a unit of California energy company PG&E Corp.

While the extent of flooding and property losses was less dire than many had predicted by the time the storm began tapering off late on Thursday, forecasters warned that more was soon to come.

The storm was powered by two overlapping phenomena — an immense airborne stream of dense moisture from the ocean called an atmospheric river, and a sprawling, hurricane-force low-pressure system known as a bomb cyclone.

The blast of extreme winter weather marked the third and strongest atmospheric river to strike California since early last week, with at least two more back-to-back storms forecast over the next several days.

The next was expected to arrive late on Friday, posing a renewed threat of flash flooding and mudslides in places now saturated from repeated downpours, the National Weather Service (NWS) said. The most vulnerable areas remained those in hillsides stripped bare of vegetation from past wildfires.

The San Francisco Bay area, the state capital Sacramento and the surrounding region were still recovering from extensive flood damage, including levee breaches along the Cosumnes River, when the latest bout of showers hit.

The latest storm doused San Francisco with about 2 inches of rain and the coastal mountains north and south of the city with 5 to 7 inches, according to meteorologist Rich Otto at the NWS Weather Prediction Center in Maryland.

Snow accumulations of one foot to 18 inches or more were measured in the Sierras, the weather service said.

High-wind advisories and gale warnings were posted up and down the state, as uprooted trees, already weakened by drought and poorly anchored in rain-soaked soil, knocked down power lines and blocked roadways.

Hazardous surf warnings were in effect for the state’s three northernmost coastal counties – Mendocino, Humboldt, and Del Norte — where three-story waves pounded the shoreline and crashed over beaches.

Authorities have reported at least two weather-related deaths from the latest storm. A tree that crashed onto a trailer home overnight killed a 1- or 2-year-old boy, and a 19-year-old woman died when her car skidded off a partially flooded road into a utility pole on Wednesday.

Four other deaths have been attributed to the New Year’s weekend storm that swept northern California — three flood victims found in or near their cars and an elderly man found dead under a fallen tree.

As many as 180,000 homes and businesses, mostly in northern and central California, were without power early on Thursday, according to data by Poweroutage.us.

“This was one of the most powerful winter storms to hit our region in years,” said Megan McFarland, a spokesperson for Pacific Gas and Electric Company, the main utility for northern and central California.

Farther north at Noyo Harbor in Fort Bragg, professional urchin diver Grant Downie said he moved his boat out of the water ahead of the storm as a precaution.

“The boat, insured or not, I feel safer with it on the truck getting hit by a tree than sinking in the water,” he said.

Crews in San Francisco spent the early morning hours clearing debris from felled trees that blocked roadways. The city’s fire department rescued a family trapped when a tree fell across their car.

Authorities advised Sonoma County residents near the Russian River between the wine country towns of Healdsburg and Jenner to evacuate their homes as the rain-swollen waterway neared flood stage.

Evacuation warnings were also issued in oceanside towns such as Santa Cruz. Officials shut down a 55-mile stretch of Route 1, a scenic coastal highway, due to flooding and debris. In Santa Barbara County, homes were ordered evacuated in three areas where hill slopes were left denuded by wildfires.

While the Sierra snowpack, a major source of California‘s water supply, was left well above average for this time of year by the storms, much more will need to accumulate through winter to markedly diminish the drought, experts say.