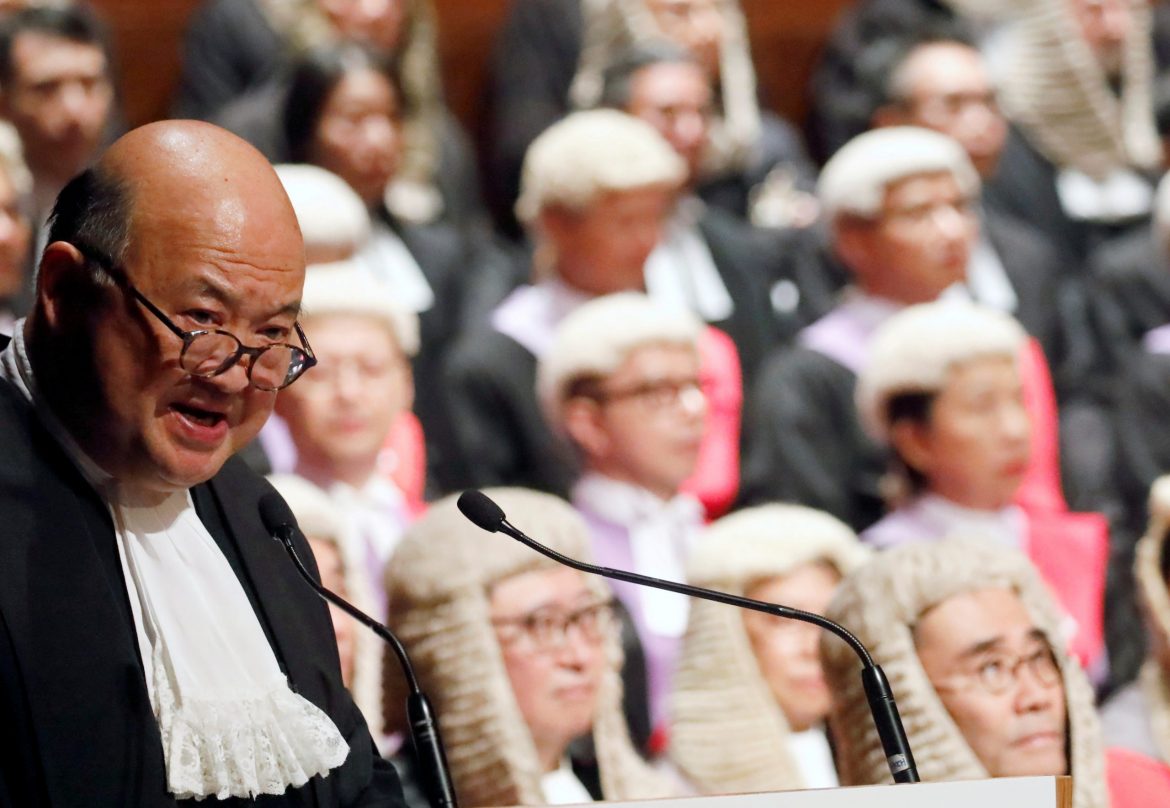 Judges and lawyers say there are signs Beijing is trying to limit the authority of Hong Kong courts to rule on core constitutional matters. And people close to the city’s top judge, Geoffrey Ma, say he has to contend with Communist Party officials pushing Beijing’s view that the rule of law ultimately must be a tool to preserve the one-party rule.

Beijing’s effort to hobble the judiciary is multi-pronged, according to more than two dozen interviews with judges, leading lawyers, and diplomats in Hong Kong. The state-controlled press on the mainland has warned Hong Kong judges not to “absolve” protesters arrested during last year’s demonstrations.

A spokesman for Hong Kong leader Carrie Lam said the central government in Beijing had “time and again made it clear” that it would continue to fully implement the “one country, two systems” principle guiding Hong Kong’s autonomous relationship with its Chinese sovereign. Beijing, he added, was committed to the Basic Law, the city’s mini-constitution that protects its rights and freedoms.

Deepening concern over Beijing’s meddling in the affairs of Hong Kong fueled the mass protests that erupted last year.

The unrest was set off by a perceived assault on the judicial system: The city’s government proposed a bill that would have allowed for the extradition of defendants to mainland China, where the courts are tightly controlled by the Communist Party.

The government ultimately withdrew the bill as the protests mushroomed, but by then opposition to the legislation had escalated into a broad movement for greater democracy.

The demonstrators have occasionally focused their anger on the courts, which are handling the cases of thousands of protesters who face criminal charges. Late last year, some demonstrators lobbed petrol bombs outside the entrance to the Court of Final Appeal and the High Court building.

A Reuters poll in March showed that even with the protests dying down amid the pandemic, support for the demands of pro-democracy protesters has grown. Backing for universal suffrage in Hong Kong, for instance, rose to 68% from 60% in December. Support for the protests remained strong, at 58% compared with 59% previously.

Beijing denies intervening in the running of Hong Kong. It has blamed “Western forces” for spurring unrest in the city. Still, many residents fear that the “one country, two systems” formula, agreed when the city was handed over to China by Britain in 1997, is being further eroded.

The judiciary is now at the heart of the battle over Hong Kong’s autonomy. These conflicts are playing out largely behind the scenes in the rarefied atmosphere of the city’s judicial corridors.

With their horse-hair wigs and ceremonial robes, Hong Kong’s judges symbolize one of the core promises of the handover: the right to a fair trial and equality under the law, all administered by an independent judiciary.

Such rights, a British legacy, do not exist on the mainland. Yet they are written into the Basic Law, Hong Kong’s mini-constitution.

Those rights have long been touted, frequently by the Hong Kong government, as the bedrock beneath one of the world’s most important financial cities. Significantly, they include the right of Hong Kong’s chief justice to appoint foreign judges.

But the Basic Law contains a caveat: Ultimately, the rulings of Hong Kong’s top court, the Court of Final Appeal, can be re-interpreted by the standing committee of the National People’s Congress, China’s parliament. Beijing last used that power in late 2016 to effectively bar several pro-democracy lawmakers from taking office. The three judges who spoke to Reuters said they feared China would begin to wield this power more frequently, potentially undermining the city’s courts.

In November, a Hong Kong court overturned a government emergency ban on protesters wearing masks to obscure their faces. The next day, state news agency Xinhua quoted a spokesman for a body attached to the standing committee saying that Hong Kong courts had no power to rule on the constitutionality of the city’s laws.

The announcement was swiftly condemned by local lawyers and local and foreign academics. The Hong Kong government partially won an appeal last week against the November decision.

THE MESSAGE TO HONG KONG

China’s state-controlled media weighed in as protests intensified last year. The Global Times, a tabloid published by the Communist Party’s People’s Daily, wrote in a November commentary: “The rule of law can save Hong Kong, but the premise is that the rioters must be punished.” It added: “Just like the rioters, the judges and lawyers who absolve rioters of their crimes will be despised.”

Writing in a Communist Party journal last year, Chinese leader Xi Jinping explained his view on the rule of law. The “socialist rule of law must adhere to the party’s leadership,” he wrote in the journal, Qiushi, which means “Seeking Truth.” China, Xi said, “must not copy” other countries, nor follow Western-style “judicial independence.”

China’s leaders have made their expectations of Hong Kong clear. Last year in Beijing, Vice Premier Han Zheng publicly told the city’s chief executive, Carrie Lam, that stopping the violence was the “common responsibility” of her government, the legislature and the judiciary. In so saying, Han blurred the lines of Hong Kong’s separation of powers – a check on the state that doesn’t exist on the mainland.

And this month, a top Chinese official in Hong Kong wrote about the need for “strengthening” the city’s legal system to “safeguard” China’s national security.

Under their oath of office, Hong Kong’s judges must steer clear of the political fray. Following Han’s remarks, though, one justice used his ruling on a matter related to the protests and freedom of the press to stress the doctrine of separate powers.

“The rule of law and an independent judiciary are constitutionally protected by the Basic Law,” Lam’s spokesman said.

A retired senior judge, speaking on condition of anonymity, said while the mainland is clearly trying to pressure Hong Kong’s judiciary, it doesn’t amount to an existential threat to the rule of law. The test, the former judge said, would be if the legal system succumbed to these pressures. “I have not seen that.”

‘SPEAKING UP FOR THE RULE OF LAW’

Ma, 64, became chief justice of the Court of Final Appeal in 2010 after a long career as a barrister and a High Court judge. Amid the drama that’s shaken his city in the past year, he has forcefully defended judicial independence.

Concluding his speech in Seoul last year, Ma told the audience: “Speaking up for the rule of law as it is properly understood is very much a part of what a lawyer should be doing. Look within yourselves and ask whether you are prepared to stand up and be counted.”

At a public appearance in January in Hong Kong, Ma again addressed judicial independence. He repeatedly told reporters he could not discuss the political or even the legal questions raised by the statements of the leadership in Beijing. But he did note: “The powers of the courts, by the way, are stated in the Basic Law. Hong Kong is to have independent judicial power, and those words mean exactly what they say.”

Ma went further. “Judges don’t look at the litigant’s background nor his political stance,” he said. “Destroying the rule of law is when the court thinks not everyone is equal before the law, and that some are more equal than others.”

Several friends and former colleagues of Ma say he is showing signs of strain from the job, including having to continually defend the integrity of the courts. This was evident, they say, when Ma appeared at the January event, a start-of-the-year gathering of judges, leading lawyers and senior government officials and diplomats. Ma confirmed that it would be his last time opening the annual event and that he would be retiring in January next year, when he turns 65, forgoing his option of an extension.

By then he would have served more than a decade as chief justice. Ma is only the second person to serve in the position since the 1997 handover. His successor will be Justice Andrew Cheung, who sits on the Court of Final Appeal and whose appointment was announced in March.

Ma is looking forward to a rest, and having time to indulge in his lifelong passions for cinema, cricket and England’s Manchester United football team, say those who know him.

Hong Kong-born and British educated, Ma mixes easily in international legal circles as he recruits judicial talent from abroad, foreign envoys and judges say. His ability to continue to attract leading foreign judges to serve on Hong Kong courts is a source of pride for him.

The Court of Final Appeal currently has 23 judges, of whom 15 are foreigners. Many are from the United Kingdom, Canada, and Australia. All serve as non-permanent members on the court, which means they are called on periodically to sit on cases. Their presence stems from an arrangement established at the handover that has become an entrenched part of the city’s judicial system.

All cases reaching Hong Kong’s highest court, the Court of Final Appeal, including key constitutional and human rights matters, are generally adjudicated by a panel of five judges. This includes the chief justice, three permanent judges, and one non-permanent judge.

Ma is now leading the hunt for at least one new member on the highest court in his statutory role as head of a committee that handles judicial appointments.

Another top judge voiced his deep concern for the pressures that will weigh on the new appointees. “Pressures will build on the new judicial leaders,” the judge said. “Some of us doubt that they will be able to withstand those pressures as previous generations have done. We just have to hope they can,” the judge said. “The rule of law will depend on it.”