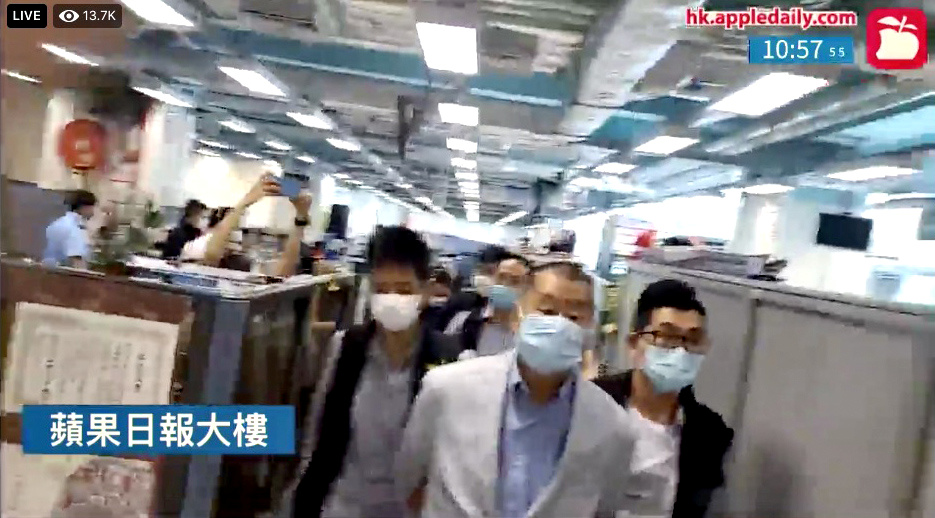 Six weeks after China imposed sweeping national security laws on Hong Kong, police moved in on media tycoon Jimmy Lai, one of the most outspoken critics of Beijing in the city.

Lai, who is 71, was whisked away from his home early on Monday morning by national security police, part of a citywide operation that also saw eight other men arrested, including several of his senior executives.

Then, just before 10 a.m., hundreds of police descended on Lai’s corporate Next Digital headquarters, where his flagship Apple Daily is produced and published.

Staffers said they asked police what legal grounds they had for entering. But these questions were largely ignored as more than 200 police streamed in, according to a live feed of the unfolding drama.

Apple Daily’s Editor-in-Chief Ryan Law, who was helping film and comment on the Facebook live feed, could be seen rushing about the building as he tried to report on events breaking in his own newsroom.

“This is, I believe, the first time in Hong Kong that police have initiated a mass search on a media outlet like this,” he said, panting, as he scaled a back staircase with a colleague to get around the mass of police officers.

As news of the raid spread, more than 10,000 people tuned in, watching as Law defied police warnings to stop filming.

The newsroom was lightly staffed at the time.

But the few employees there, some clad in shorts and sneakers, were told to produce identity documents and register with the police. Some demanded to first see a search warrant.

Several executive offices, including Lai’s, were sealed off with a red cordon and guarded by police.

Two months before, in an interview with Reuters in one of those sealed rooms, Lai said he was bracing for just such a day: shifting assets abroad and making preparations with lawyers.

“Everything will be piled on us,” he had said.

At around 11 a.m., police led Lai into his office in handcuffs. When he went to the toilet, an entourage of around 20 officers followed. Several other senior executives were also shown being taken into the building.

The police said in a statement that they had a court-issued warrant for their search and that the nine men had all been arrested for suspected national security law violations, including collusion with foreign powers.

The police did not reveal the names or any specific charges for any of those arrested.

The raid, though expected, rattled some staffers.

Months before the law took effect, the newspaper had shredded documents, uploaded digitized files to overseas servers, and safeguarded sources, two senior reporters told Reuters, speaking anonymously because of the sensitivity of the situation.

“I had prepared myself mentally for this,” one said. “But emotionally I feel a little conflicted. It’s happened so quickly. The government is finally taking this drastic step to destroy the city’s media freedoms.”

Police carted 25 boxes of evidence from the building and blocked reporters from other outlets from entering.

Senior police on the scene tried at one point to prevent Apple Daily reporters working at their desks but relented upon fierce objections from staff present.

Law, Apple Daily’s chief editor, said the paper would continue to be published no matter what.

“Business as usual,” he said in a text message to Reuters.