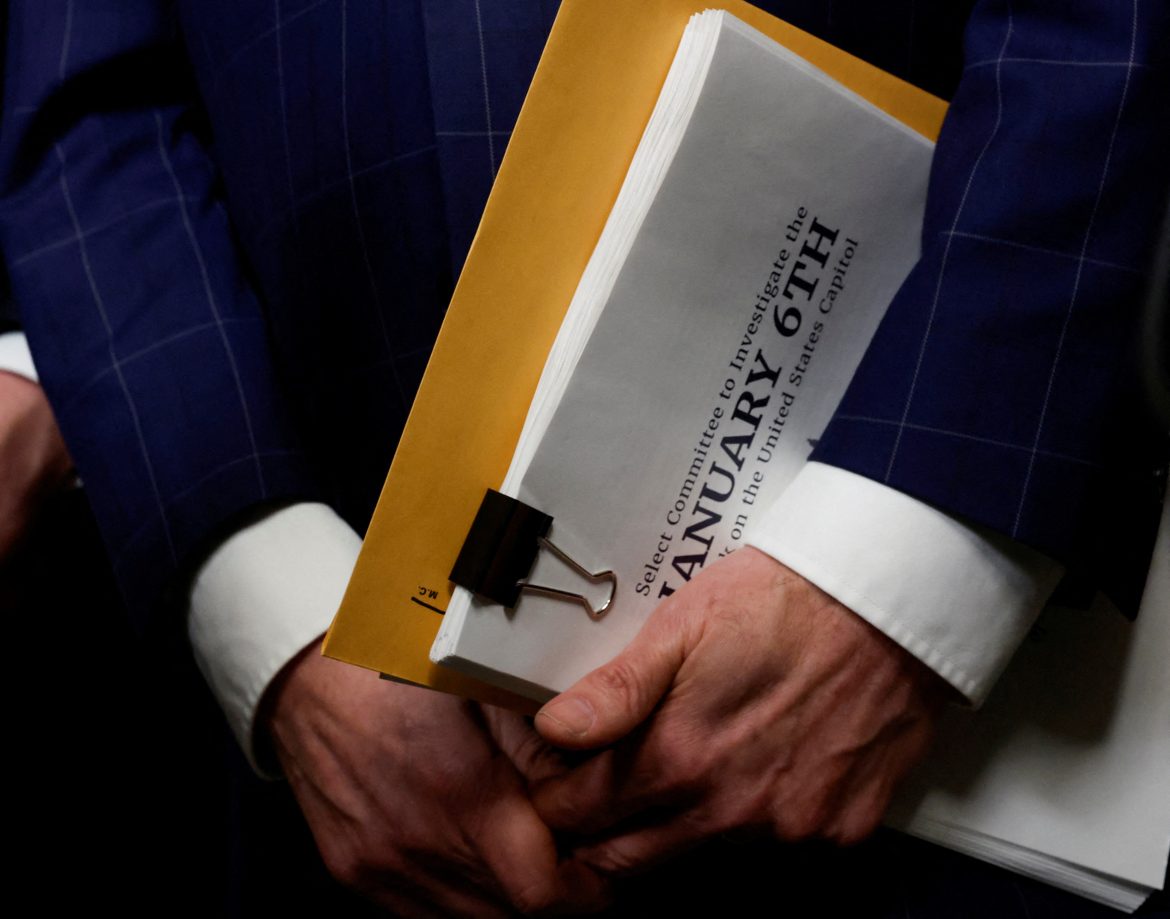 Five House Republicans who were denied seats on the January 6 committee released their own report on the Capitol riot Wednesday that included key findings of security failures and missteps on the part of Capitol Police, House Speaker Nancy Pelosi, and Democratic leadership.

The 141-page report from Republican Reps. Jim Jordan (R-Ohio), Jim Banks (R-Ind.), Kelly Armstrong (R-N.D.), Troy Nehls (R-Texas), and Rodney Davis (R-Ill.) was released on Wednesday, no doubt intended to coincide with the Jan. 6 Committee’s publication of its final report. The panel, however, punted its release to Thursday at the last minute without offering an explanation.

In stark contrast to the official committee’s focus on the actions of former President Donald Trump throughout their investigation, the GOP probe centered around “why the Capitol was left so unprepared” on January 6, 2021.

Among the key findings set forth in the report, which included a detailed timeline of events leading up to and during the riot, was that U.S. Capitol Police (USCP) had received “sufficient information from an array of channels to anticipate and prepare for the violence that occurred” but were unprepared for the events that unfolded due, in part, to “internal politics and unnecessary bureaucracy.”

The report disclosed that staff members of the House Sergeant at Arms office sent an email to then-chief Paul Irving indicating “that January 6th was Pelosi’s fault.” Investigators also found that Democratic leadership’s concern over “optics” in the wake of the Black Lives Matter riots of 2020 “prevented early deployment of the National Guard.”

According to the report, Intelligence and Interagency Coordination Division (IICD) chief Julie Farnam’s “misplaced priorities” contributed significantly to the Capitol breach, with investigators noting that, instead of gathering intelligence online, she instructed analysts to focus on requests for information. The report quotes one IICD analyst who told investigators:

“That unit was disbanded by [Farnam] almost on day one. We, at the time of January 6, we were not doing proactive searches of social media like we had been before. We were strictly reactive and responding to requests for information.” The analyst’s claim, according to the report, was “substantiated by USCP’s own internal after-action report that was drafted in June of 2021.”

The findings also reveal that the IICD “failed to warn USCP leadership and line officers about the threat of violence, despite the fact that IICD analysts gathered intelligence that clearly indicated a need for a hardened security posture.”

One of the more stunning revelations in the report was that Irving deliberately “left Republicans out of important discussions related to security” in the face of “political pressures” from Pelosi and Democratic leaders.

“As a critical member of the Capitol Police Board, the House Sergeant at Arms had an obligation to all members, staff, and USCP officers to keep them safe by consulting stakeholders without partisan preference,” the report continues, adding that Irving only provided information to Republicans after Pelosi’s office instructed him to do so.

“In one case, Irving even asked a senior Democratic staffer to ‘act surprised’ when he sent key information about plans for the Joint Session on January 6, 2021 to him and his Republican counterpart,” the report stated.

Investigators further found, “The leadership of the Intelligence and Interagency Coordination Division retaliated against subordinates who spoke out about the division’s shortcomings.”

The report also points to a shocking lack of training and equipment provided to Capitol Police officers charged with protecting the Capitol on the day of the riot, with one USCP officer telling investigators that he only had his USCP baseball cap to protect his head as he stood guard at the Capitol complex Jan. 6 surrounded by protesters.

“Even if every USCP officer had been at work that day, their numbers would still have been insufficient to hold off the rioters due to a lack of training and equipment,” the report states. “The USCP was set up to fail, and there have been scant signs of progress toward addressing these weaknesses.”

Yet another compelling finding was that Capitol Police personnel gather information on private citizens who met with members of Congress and senators “not in fact for security purposes.”

“This issue and others require additional scrutiny by the relevant committees of Congress,” the report states.

The report concludes with several additional recommendations, including a requirement that the USCP board submit meeting minutes to, and regularly appear before, the appropriate oversight committees. The Republican lawmakers also called on the USCP board “to professionalize its support staff” with more resources and reform its structure, including making the Inspector General “independent from the board.”

The five Republican lawmakers involved in the probe were nominated by House Minority Leader Kevin McCarthy to serve on the Jan. 6 panel. When Speaker Pelosi blocked the appointments of Jordan and Banks, McCarthy withdrew the other nominees. Their investigation was launched concurrently with that of the panel.

While the J6 Committee was given subpoena authority in their investigation, the GOP report was based on open-source documents and voluntary interviews with key witnesses including Farnam, U.S. Capitol Police Chief Tom Manger, and current House Sergeant at Arms William Walker.

Additional USCP officers spoke with investigators on condition of anonymity, citing fears that they would be subjected to retaliation from their superiors for cooperating with the GOP-led investigation.