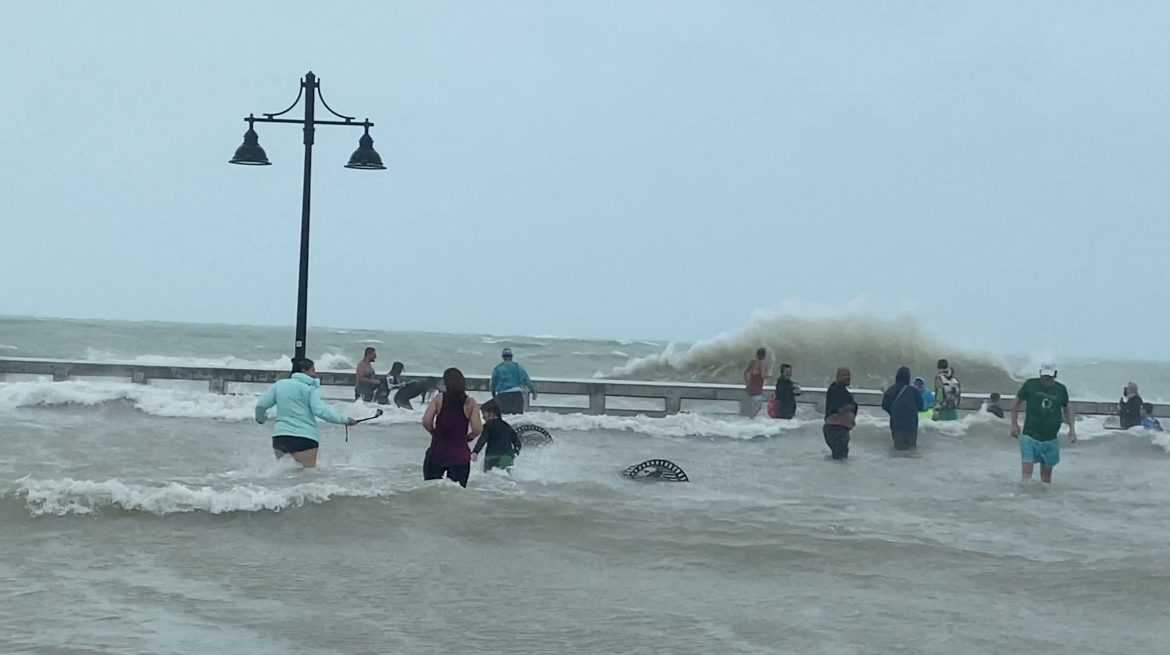 Hurricane Ian on Wednesday began lashing Florida’s Gulf Coast with powerful winds and drenching rain, prompting authorities to tell residents it was too late to evacuate as the eye of the storm inched toward shore with close to Category 5 power.

At 11 a.m. ET, Ian was around 50 miles southwest of Punta Gorda, Florida, with sustained winds of 155 miles per hour, the U.S. National Hurricane Center said.

That was just shy of a Category 5 designation, which is the most severe storm classification with sustained winds of at least 157 mph, though Ian was expected to weaken after hitting land, the center said.

Forecasters say Ian would unleash wind-driven high surf and torrential rains that may cause coastal flooding of up to 12 feet along with intense thunderstorms and possible tornadoes. The storm’s outer bands were already bringing heavy winds and rains to much of the Gulf Coast on Wednesday morning.

“I wish this wasn’t a forecast that was about to come true. This is a storm that we will talk about for many years to come, an historic event,” said Ken Graham, director of the National Weather Service.

The hurricane was expected to crash into Florida at about 2 p.m. in Charlotte County, about 100 miles south of Tampa and just north of Fort Myers. The region is home to miles of sandy beaches, scores of resort hotels, and numerous mobile home parks, a favorite with retirees and vacationers alike.

In awe of Hurricane Ian's display of power as it approaches Florida.

Earlier this week, authorities told more than 2.5 million residents to evacuate, but some, like Mark Feinman, a professional musician in St. Petersburg, chose to stay put.

“There’s absolutely no one on the roads here,” Feinman, 36, said early on Wednesday. “The sky is this weird, ominous gray, and you can feel the wind gusts and the rain hits every little while. You can feel it in the air. My ears popped.”

Feinman said he does not regret his decision to stay; he feels his house is secure, and fortunately for him, the storm jogged to the south of earlier forecasts, which showed it making a direct hit on the Tampa-St. Petersburg area.

“We still expect it to get bad here. But I’ve boarded up, put down sandbags. We’re stocked up on supplies. I guess ready or not, it’s coming.”

Ken Wood, a bridge tender in coastal Dunedin, heeded the evacuation orders and drove about 250 miles northwest to Tallahassee, where he will weather the storm.

“It was a mandatory evacuation so I thought it best to secure everything and leave,” Wood, 56, said. But he is worried about his 18-foot boat parked under the carport.

“It’s tied down and hitched to my truck. I put 7 bags of topsoil in it, hoping to weigh it down, but who knows what the winds will do to it.”

President Joe Biden, speaking at an event in Washington, vowed that the federal government will help Florida after the storm passes.

“We are on alert and in action, we’ve approved every request Florida has made,” Biden said.

Overnight and into Wednesday morning, Hurricane Ian pounded the Florida Keys island chain to the southernmost shores of the state’s Gulf Coast with heavy rains showers and winds gusts of 40 mph, the NWS reported.