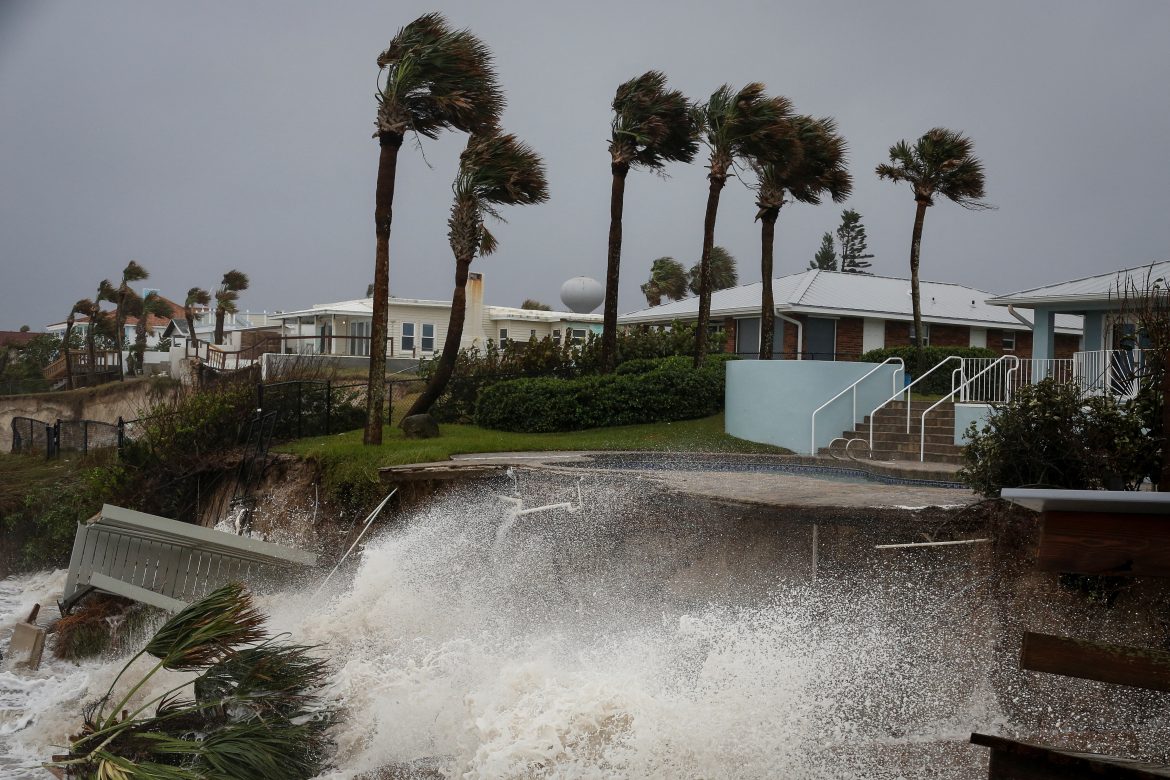 Hurricane Nicole weakened into a tropical storm on Thursday shortly after making landfall on Florida’s east coast, barreling ashore with a brew of heavy downpours and fierce winds.

Some 215,000 homes and businesses across Florida’s Atlantic coast were without power on Thursday morning, after the storm, packing 75 mph winds, made landfall at 3 a.m EST along the east coast north of Miami as a hurricane, the National Hurricane Center said.

Nicole was moving northwest over central Florida as it packed 60-miles-per-hour wind gusts early Thursday morning, the National Hurricane Center said in an advisory. It was expected to continue to weaken as it churns north over the next two days through Georgia and into the Carolinas.

Most of Florida’s 22 million residents remained under a tropical storm, high wind, and storm surge warnings along with local hurricane statements that urged people to stay indoors and watch for flooding.

The NHC warned that wind-driven waves would wash over beaches and rush inland to flood low-lying areas well beyond the shore. It also said damaging winds were likely to blow down trees and power lines.

State officials opened 15 emergency shelters across the region, activated 600 National Guard troops, and placed 1,600 utility workers on standby to restore power knocked out by the storm.

More than 20 school districts across the state were scheduled to be shuttered on Thursday. Orlando International Airport stopped commercial flights on Wednesday while Walt Disney parks were planning to slowly reopen on Thursday.

Local news footage on social media showed whitecap waves barreling ashore and crashing into and past beaches as winds from the storm whipped electrical lines and the tops of palm trees.

Upon Nicole‘s arrival, the state was still reeling from Hurricane Ian, a catastrophic Category 4 storm that made landfall on Sept. 28 along the state’s central and southern Gulf Coast. Ian caused an estimated $60 billion in damage and killed more than 140 people.

Although not nearly as strong, Nicole still posed a formidable threat, especially to structures and coastal foundations weakened by Ian.

“Dozens upon dozens” of ocean-side buildings in Volusia County, including high-rise condominiums, have been declared structurally unsafe since Ian, with some now “in imminent danger of collapsing” from further shoreline erosion, Sheriff Mike Chitwood said.

Volusia was one of several coastal counties where officials issued mandatory evacuation orders or advised residents in oceanside communities and barrier islands to seek higher ground.

“This is the last window of opportunity to secure your families and to secure your properties and possibly save some lives,” Chitwood said in a video posted online on Wednesday.

Even before reaching hurricane strength, the storm unleashed “extensive flooding” across much of the Bahamas, including the islands of Grand Bahama, Eleuthera, Andros, and the Abacos, National Emergency Management Agency chief Captain Stephen Russell told a news conference.

The storm was declared a hurricane on Wednesday evening as it made its first landfall on Grand Bahama island in the northwestern corner of the Atlantic West Indies archipelago nation.

Nicole was only the second hurricane on record to make landfall in the continental United States after Nov. 4. Hurricane Kate made landfall near Mexico Beach, Florida on Nov. 21, 1985, Philip Klotzbach, a hurricane expert at Colorado State, said on Twitter.

Nicole was also the latest calendar year hurricane to make landfall on Florida’s East Coast on record, breaking the old record of Nov. 4 set by the Yankee Hurricane in 1935, Klotzbach said.

The Atlantic hurricane season officially runs from June 1 to Nov. 30.