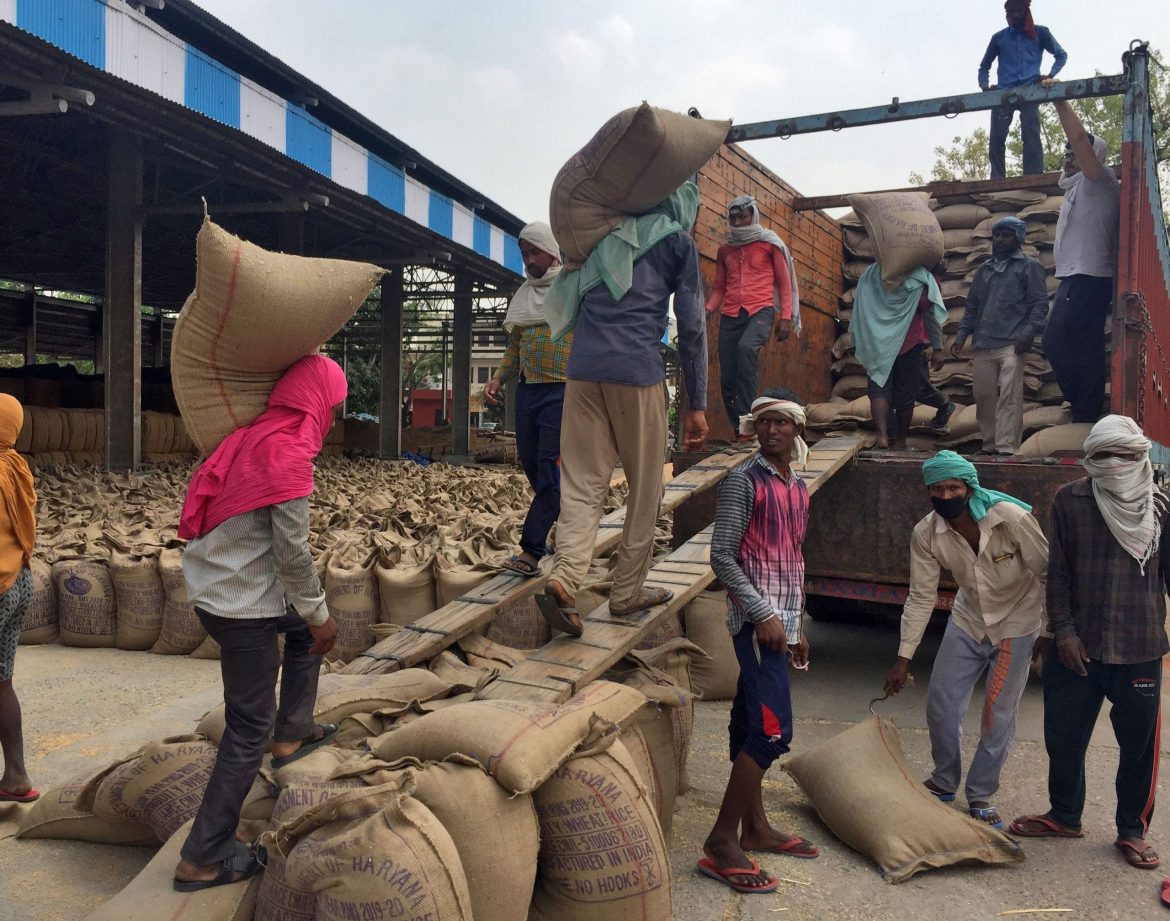 The country-wide lockdown, introduced in late March to stem the spread of the new coronavirus, has led to a labor shortage across rural India, crimping the harvest and preventing the bagging and movement of it.

The largest crop gathered globally during the pandemic, which is worth more than $26 billion, according to traders, may serve as a test case for other harvests coming up around the world, including Brazil’s main sugarcane and coffee harvests and Southeast Asia’s second rice harvests. India is the world’s second-largest producer and consumer of wheat behind China.

The lockdown has severely hit India’s more than 7,000 wholesale food markets, which are the only channel for getting food supplies to India’s 1.3 billion inhabitants.

“Nearly 90% of laborers aren’t around. Last season, there were about 5,000 laborers, and this season there are only 500,” said Radhe Shyam, a commission agent at the Gharaunda Grains Market. “We haven’t seen anything like this before.”

Millions of migrant laborers have had to sit out one of the most lucrative periods on the crop calendar when they normally would make up to half their annual income.

To accommodate the dearth of workers, marketing agents have been forced to stretch out their wheat procurement period from the usual 20 to 30 days to more than two and a half months.

That has cut the daily flow of farmers bringing crops to wholesale markets to about a tenth of normal, commission agents said, raising the risk of spoilage.

It also means delayed payments for growers, who say that will stop them from buying seeds and fertilizers for the next planting window that begins in June.

That is generating an ever-growing pile of unsold, poorly stored grain that will spoil quickly.

At 107.18 million tonnes, this year’s Indian winter wheat crop is second only to China’s projected 133.5 million-ton wheat haul in 2019-2020, which is split between spring and winter wheat varieties and is gathered in two separate harvests.

India’s growers are ill-equipped to hold on to such volumes for long, as unlike their western peers most have no on-site storage facilities.

“We don’t have any means to store wheat. After a recent spell of rains and hails, I’m worried about the quality of my crop,” said Sukrampal, who has left a pile of wheat in the open air on his five-acre plot.

Nearly 85% of India’s farmers own less than five acres of land, so even relatively small crop losses, or any delay in payments, can affect their livelihoods.

In addition, farmers say this year’s staggering sales schedule to marketing agents means they will have difficulties repaying bank loans, which are also due at this time of year and tied to the annual preparations for summer sowing.

Last month, in the Karnal district of Haryana, Reuters witnessed three wholesale markets which appeared almost deserted because of the absence of migrant workers, who come mainly from poverty-stricken states such as Bihar and Jharkhand in India’s east. But the lockdown, which took effect from March 25, prevented them from making their annual trips to the Haryana-Punjab wheat belt for harvest.

Migrant workers can earn about half their annual income of roughly 30,000 rupees ($394.72) during the wheat harvest, which normally tides them over until they return to the crop belts for the rice harvest in October, commission agents and market officials say.

Missing out on that payday means rural spending will likely dip in the coming months.

“Since there’s hardly any sale, I’ve started working as a laborer to compensate for my losses,” said Rakesh Kumar, a tea stall owner at a grains market.

With private traders largely absent from the market due to the lockdown, industry experts say they expect the FCI to buy a large proportion of the wheat crop, adding to India’s already-bloated multi-billion dollar food subsidy spending.

The FCI is already saddled with massive crop mounds from last season and will not have enough room to store much new season wheat, according to industry experts. That raises the prospect of rotting crops even as thousands die from malnutrition-related illnesses each year in India.

Wheat stocks at FCI warehouses on April 1, when the new marketing year began, totaled 24.7 million tonnes, according to government data, more than three times the government-fixed target, and roughly a quarter of India’s annual demand.

The FCI buys wheat from farmers at a guaranteed price to give them an assured return and meet any shortfall due to unfavorable weather conditions.

If the FCI ends up buying more than 37 to 40 million tonnes of wheat this year, its granaries will overflow by June, said Amit Takkar, chief of brokerage Conifer Commodities.

The government will struggle to export much of that, as the fixed domestic prices have pushed Indian wheat prices about $35 a tonne above the world market, according to industry experts.

J.C. Penney To Permanently Close About 242 Stores As Part Of Bankruptcy Plan