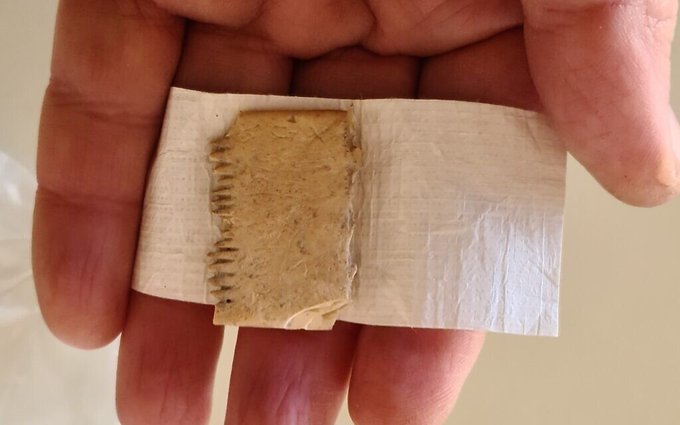 Archeologists in Israel have unearthed an ancient comb representing the first known artifact to contain a full sentence in the archaic Canaanite language.

Experts have dated the engraving to about 1700 B.C. after matching the letters to the ancient alphabet originally discovered in Egypt’s Sinai desert, the Associated Press reported.

The remarkable discovery also contained an element of the mundane: the comb’s inscription encouraged its ancient user to practice good hygiene.

“May this tusk root out the lice of the hair and the beard,” it read.

Archeologists also noted that the comb even included microscopic evidence of head lice on it.

Lead researcher and Hebrew University archaeologist Yosef Garfinkel said that until this find, archaeologists had only seen a few Canaanite letters or, at most, a single word on previously-recovered artifacts.

“We didn’t have enough material,” Garfinkel explained to the news service.

The comb was first excavated in 2016 at an archaeological site in southern Israel called Tel Lachish. However, the tiny lettering was not discovered until a Hebrew University professor with a sharp eye noticed the etching in late 2021.

The discovery was detailed in the most recent publication of the Jerusalem Journal of Archaeology. Garfinkel noted that since the inscribed comb was discovered in the palace and temple district of the ancient city and referenced a beard, it could mean that only wealthy men could read and write.

The Canaanite alphabet is believed to be the progenitor of alphabetic systems, including Hebrew, Arabic, Greek, Latin, and Cyrillic, according to a Christian Headlines report on the discovery.