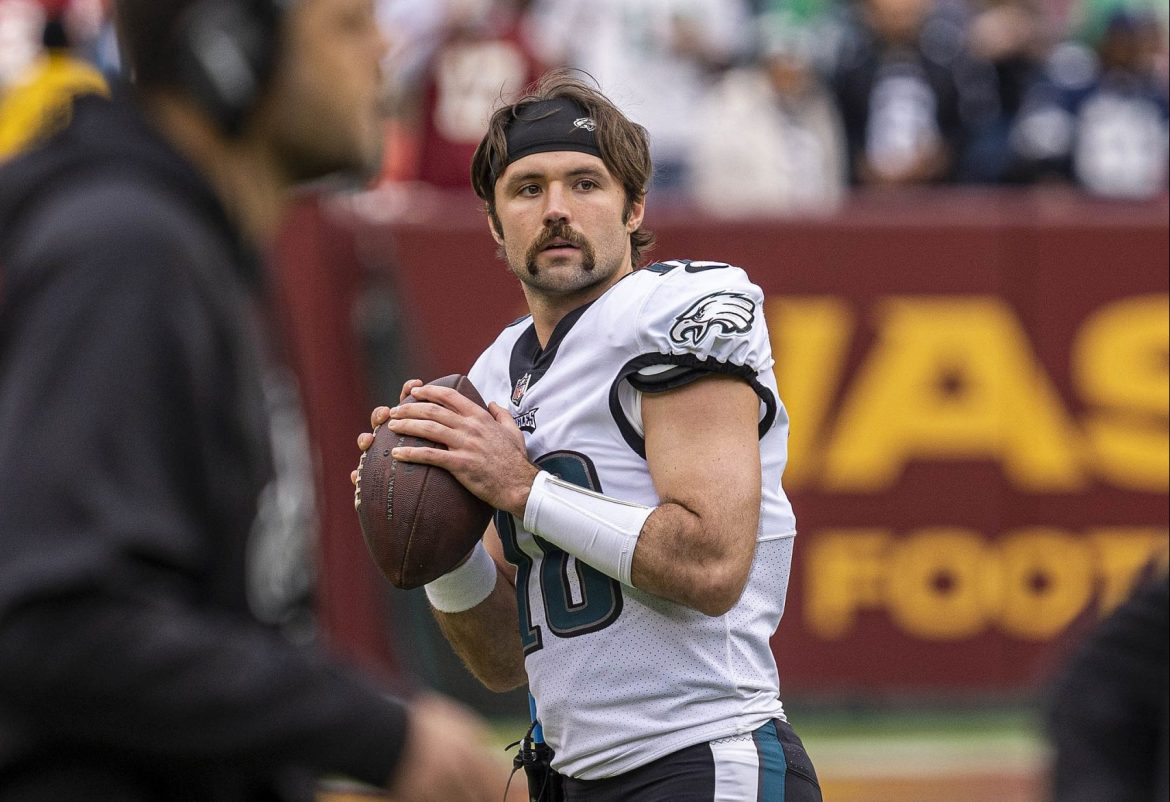 The Eagles may be without Jalen Hurts for at least one game after the star quarterback injured his shoulder in a victory over the Chicago Bears on Sunday.

Hurts has a sprained shoulder and his status for Philadelphia’s game at Dallas on Christmas Eve is uncertain, according to multiple news reports. The injury isn’t believed to be serious enough to prevent Hurts from returning this season. Gardner Minshew will start if Hurts can’t go.

Hurts was the NFL’s frontrunner for the Most Valuable Player award before the injury, leading the Eagles to a 13-1 record and one victory away from setting a franchise record for most wins in a regular season.

Hurts has 3,472 yards passing, 22 touchdowns, and only five interceptions. He also has 747 yards and 13 TDs on the ground, two shy of breaking Cam Newton’s single-season record for rushing scores by a QB. Hurts’ combined 35 TDs are tied with Randall Cunningham for the most in a season in team history.

Hurts was injured at the end of the third quarter Sunday when defensive lineman Trevis Gipson tackled him hard to the ground after a 3-yard run. Hurts was slow to get up, but stayed in the game and finished with 315 yards and two interceptions. He ran for three TDs.

“It wasn’t the first time I’ve been slow [to get up], it won’t be the last,” Hurts said. “I did play a really physical game, and it was real cold, too. So happy we were able to find a win and in the end find a way.”

The Eagles faced a similar situation in 2017 when quarterback Carson Wentz suffered a season-ending knee injury during an MVP-caliber season with the team leading the NFC and only three games remaining. Nick Foles stepped in and led Philadelphia to an improbable championship, beating Tom Brady and the New England Patriots for the franchise’s first Super Bowl title.

This time, the Eagles likely won’t have to turn to a backup the rest of the way. There’s no urgency to rush Hurts because Philadelphia only needs one more win in the final three weeks to lock up the No. 1 seed and home-field advantage throughout the NFC playoffs.

Minshew, like Foles in 2017, is a capable backup. He started one game for the Eagles last year and led them to a win over the New York Jets on Dec. 5, 2021. Minshew completed 20-of-25 passes in that game for 242 yards and two touchdowns with no interceptions.

Eagles coach Nick Sirianni has made sure Minshew and third-string QB Ian Book stay sharp by giving them valuable repetitions in practice.

“I think we do a lot of developmental periods. This year, we’ve done a little bit something different as far as one of our periods each day at practice is our twos versus ones, kind of like we did in camp. So, we’re doing that throughout the year,” Sirianni said.

You’re doing that because not everything is scripted up the way you think it’s going to be scripted up in a game. You have to be ready to handle unknowns, and so we’re running our plays as an offense against our defense with the twos, and so that’s a great opportunity for us also to correct those guys. Sometimes with scout team reps you don’t always get to show them the day of and be like, ‘All right, here is what we have to correct.’ But we do with these reps, and so that’s been huge. … We’ve seen Gardner play. We all know how Gardner is, and I’m really excited about Ian and how he’s been developing. He works hard, he’s smart, and he’s doing some nice things out there on the practice field.

Minshew was a sixth-round pick by Jacksonville in 2019 and led the Jaguars to a 6-6 record after Foles was injured. He was 1-7 as a starter in 2020 and was traded to Philadelphia before the 2021 season.