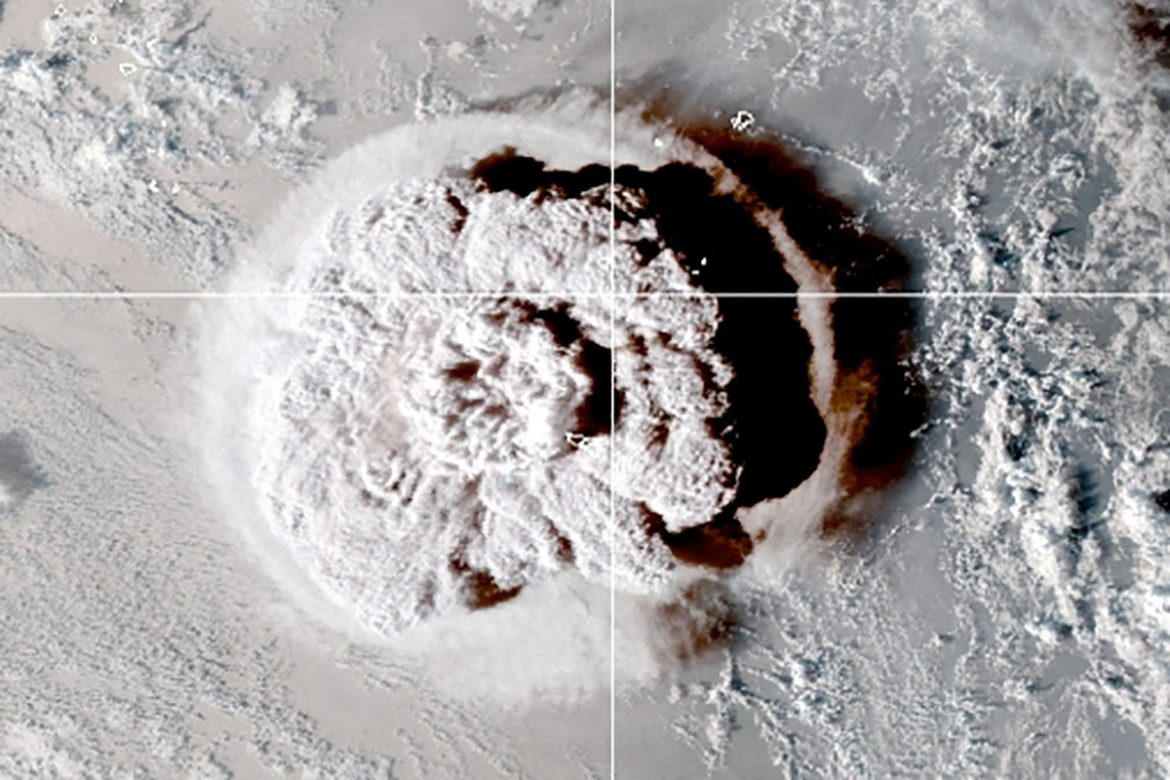 The powerful Jan. 15 underwater eruption of Tonga’s Hunga Tonga-Hunga Ha’apai volcano in the South Pacific produced a plume that soared higher into Earth’s atmosphere than any other on record — about 35 miles — as it extended more than halfway to space, researchers said on Thursday.

The white-grayish plume unleashed by the eruption in the Polynesian archipelago became the first one documented to have penetrated a frigid layer of the atmosphere called the mesosphere, according to scientists who employed a novel technique using multiple satellite images to measure its height.

The deafening eruption sent tsunami waves across the Pacific Ocean and produced an atmospheric wave that traveled several times around the world.

“To me, what was impressive is how quickly the eruption happened. It went from nothing to a [35-mile]-high cloud in just 30 minutes. I can’t imagine what that must’ve been like to see from the ground,” said Proud, a fellow at Britain’s National Centre for Earth Observation working at the University of Oxford and STFC RAL Space.

“Something that fascinated me was the dome-like structure in the center of the umbrella plume. I’ve never seen something like that before,” added Oxford atmospheric scientist and study co-author Andrew Prata.

Damage and loss of life — six dead — was relatively low due to the eruption’s remote location, though it did obliterate a small and uninhabited island. Tonga is an archipelago of 176 islands with a population of just over 100,000 people, situated southeast of Fiji and just west of the international dateline.

“It could have been much worse,” Proud said.

“The mesosphere is one of the upper layers of our atmosphere and is generally pretty quiet — there’s no familiar weather up there and the air is very dry and extremely thin,” Proud said. “It’s one of the least-understood parts of the atmosphere as it’s so hard to reach. Lower down, we can use planes. Higher up, we have spacecraft. Many meteors burn up in the mesosphere, and it’s also home to noctilucent (night-shining) clouds, which are sometimes visible in the summer sky towards the poles.”

Until now, the highest recorded volcanic plumes were from the 1991 eruption of Mount Pinatubo in the Philippines, at 25 miles, and the 1982 eruption of El Chichón in Mexico, at 19 miles. Volcanic eruptions in the past likely produced higher plumes but occurred before scientists were able to make such measurements. Proud said the 1883 Krakatau eruption in Indonesia probably also reached the mesosphere.

Scientists were unable to use their standard temperature-based technique of measuring a volcanic plume because January’s eruption passed the maximum height for which this method could be used. They instead turned to three geostationary weather satellites that obtained images every 10 minutes and relied upon what is called the parallax effect — determining something’s position by viewing it along multiple lines of sight.

“For the parallax approach we use to work, you need multiple satellites in different locations – and it’s only within the past decade or so that this has become possible on a global scale,” Proud said.

Racial hatred: U of Chicago offers course titled ‘The Problem of Whiteness’